Mets Minor League Players of the Month for June

Share All sharing options for: Mets Minor League Players of the Month for June

The Mets seem to be getting more and more in tune with how their fans consume the game and one of the clear focus areas over the last couple of seasons has been their Twitter presence. Paired with the growing interest in the club's farm system, it was only natural that we'd see the introduction of a team-run, dedicated Minors feed, @MetsFarmReport.

It's been a useful little feed to follow as they provide all sorts of interesting insights and transaction notes, but one of their best serial updates has been the Minor League players of the month. It's been exactly what it sounds like: They choose three players from each level who have excelled in an area of the game (Hitting, Pitching and Defense).

So let's run down each of those players this month, and just for good measure I'll elaborate on some of the guys that strike my fancy:

It should come as no surprise when I say that Matt Harvey is firmly on the doorstep. He may not be getting the start this Saturday -- despite a satisfactory if somewhat uneven "audition" earlier this week -- but he's certainly beginning to figure things out in Buffalo. Over his last ten starts he's featured a 9.00 K/9, 2.53 ERA and an impressive .205 opponent average, all of which are improvements over his season marks. The issue has been his 3.95 BB/9 over that span, which is nearly identical to his mark for the season (3.94). In my estimation this is all that's holding him back from a spot in the Major League rotation (and four more walks on Monday didn't help). However, with the clear improvements he's made he's beginning to consistently dominate Triple-A hitters and at this point it's only a matter of time, and a short one at that.

It's been something of a roller coaster ride for Eric Campbell throughout his pro career. In '09 he was a four-year college player that batted below .250 with no power in Lo-A. In '10 his advanced plate discipline unlocked the rest of his approach as he batted nearly .330 and reached Double-A before the break. 2011, a broken finger late in the prior season seemed to set him back as he looked extremely pedestrian in Double-A all year. Finally, in 2012 he's leading the Eastern League in OBP (.468) and batting (.318) as his superb patience has once again allowed his hit tool to shine. It's tough to project a big leaguer here as Campbell lacks a defensive home and still doesn't have enough power for a corner spot. However, any Major League bench could use a guy with a and a 1:1 BB-to-K rate. 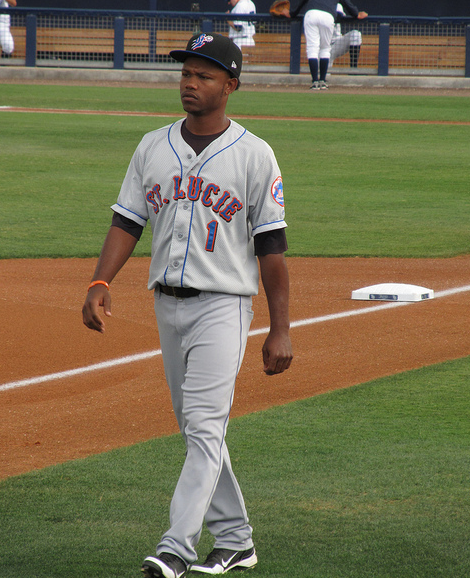 Something has clearly clicked with @Pro_zo. In 2010, Alonzo Harris batted .224 with a much more damning 20:90 BB-to-K rate at Lo-A. He pretty much looked like filler at that point. He got off to a slow start in a repeat appearance in Savannah but by year's end the decline in strikeouts was definitely noticeable (65). Now at Hi-A, he's seemingly building on that growth by boosting his walk rate as well (9.4%). Factor in his ever-present all-around athletic ability and, while his bat is still a big question mark at the higher levels, suddenly he's gone from an afterthought to an intriguing player at the very least.

After some early season struggles Michael Fulmer is gunning for the distinction of the best Mets pitching prospect outside of the big three. Since May 1st, Fulmer has posted a 2.29 ERA and at the tender age of 19 the 2011 sandwich pick is consistently dominating SAL hitters nearly two years his senior, posting a tremendous .196 opponent average -- the fourth best mark in the league. Utilizing a power fastball and a razor blade slider, Fulmer is overpowering the opposition at this point and figures to get at least a few starts in Hi-A before the season's through. There's a moderate chance that by this time next year we're talking about the organization's no. one overall prospect.