Continuing with the theme of all Matt Harvey, all the time, I thought it might be interesting to dissect his pitch selection a bit from last night's stellar debut. We do live in the Pitch F/X age, after all, so why waste the information?

If you stayed up to watch Harvey's effort last night, you probably noticed one underlying theme to his approach: heavy use of the fastball. This shouldn't really come as any surprise if you've kept tabs on Harvey over the past season or so. Matt Harvey has a really good fastball. Thus, he throws it a lot.

However, last night was more than just a lot. In fact, his fastball rate of 71% — 75 of 106 total pitches — would currently place him fifth in all of baseball in terms of fastball usage:

*Interestingly, his counterpart from last night, Wade Miley, is third on that list...and he was true to form, tossing 72% heaters.

Why was the strategy so successful? Well again, his fastball is great. You may have noticed the strikeouts.

You may have specifically noticed all the strikeouts on fastballs up in the zone. Seven of his eleven strikeouts came on four-seamers, most of which were located high in the strike zone. During the post-game, Keith Hernandez gushed about the success the 23-year-old had putting people away with the high heat. After the game, Rob Johnson said, "[Harvey's] four-seamer up had a lot of life on it."

But again, we live in the Pitch F/X era so let's see for ourselves. Below are all of the four-seam fastballs that Harvey threw in a two-strike count (click image to embiggen): 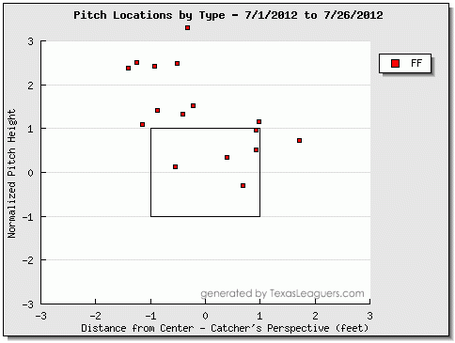 There's not much subtlety to his approach here. Any time he got to two strike, Harvey would elevate the fastball, often reaching back for some extra giddyup and getting as high as 98 mph. It's not subtle, but ask Jason Kubel about how easy it is to hit a 97-mph, chest-high fastball.

It's funny because one of his focal points this year in Buffalo has been locating the fastball low in the zone. To me, however, this is Harvey enjoying the fruit of those labors. With a fastball like his, it's going to be tough to have a lot of success against this 'low early, high late' approach, even if you know it's coming.

But man does not live by bread (fruit?) alone. As we all know full well, few starting pitchers can thrive throwing that many fastballs. Harvey's percentages will likely have to come down as he continues to learn to throw his secondary pitches for strikes more consistently — something he flashed quite a bit last night. And it should; for Harvey to reach his full potential as a front-of-the-rotation horse he'll need a fully-developed repertoire.

As a Mets fan, it is sort of exciting to know that, if need be, Matt Harvey can throw smoke with the best of them.