Three Mets Prospects Who Could Move At The Deadline

Share All sharing options for: Three Mets Prospects Who Could Move At The Deadline

First, let's set the expectations. In my estimation this team has done more than enough to show Sandy Alderson they can be competitive, minus the bullpen. That is clearly the main area that needs support, and it's pretty clear that Jenrry Mejia, Elvin Ramirez, Josh Edgin, etc. won't be enough.

The next avenue is improving through trade. The thing is, however, there are very few players in the organization that would represent ideal trade chips. The major league roster is full of young players that represent the future. Obviously there are the core guys like David Wright and R.A. Dickey that are going nowhere. And the usual fringe guys aren't ideal, with Scott Hairston doing too much to unload and Justin Turner not doing enough.

So you look to the minors. On the hitting side, there's not all that much there, assuming Jordany Valdespin and matt den Dekker are off limits (though I think Valdespin's name will come up a lot that week).

On the pitching side there's almost too much there; at least too much ceiling, guys like Zack Wheeler and Matt Harvey that you just can't trade while the club is still in re-build mode, which they definitely still are. There are impressive lower level pitchers like Domingo Tapia and Rafael Montero, but pitchers that have yet to prove they've mastered A-ball rarely return much.

And let's just put it out there; there will be no Scott Kazmir - Victor Zambrano II. No Wheeler-for-whatever, "all in" sorts of moves happening as has been floated by those looking for page-hits. Hell, Sandy may not even be in on the premium relievers, but for our purposes we'll just assume that the primary targets fall in the high end, Huston Street, Jonathan Broxton, Rafael Betancourt range.

Ok now that we've set the stage a bit let's get into the prospects who actually do fit the bill:

Quick, name the only current Mets pitching prospect to post a 2.50 or better K/BB at each level of the minors. Well now that Dillon Gee has graduated we must be talking about McHugh. The 25-yr old righty has routinely been outshone by the system's brighter lights yet continues to quietly put up very strong numbers as he climbs to the highest levels of the minors (see, career 2.68 Double-A ERA).

His average velocity/stuff doesn't blow anyone away but strong command of a well-developed four-pitch mix paired with consistently excellent K-rates (9.0 career) makes him a quietly promising pitching prospect. While he won't be headlining any rotations, McHugh represents as solid a bet as you'll find to reach his potential as a lower end major league starter...which has significant value.

So why would they trade him? He's not at the level of a Wheeler, who is untouchable. Yet he's above the low level guys like Tapia who won't return enough to consider moving. And perhaps most importantly since he's put up excellent numbers in 2012 he'll return something of use. McHugh is perhaps the only starting pitcher in the system that fits all of those requirements. Now I don't love the idea of trading nearly ready major league pitching. However, while there are a number of high profile starting pitchers ascending the system right now and with guys like Niese, Gee and probably Dickey here to stay, trading a lower ceiling pitcher wouldn't be the worst thing in the world, especially if Sandy is after a very high end reliever. 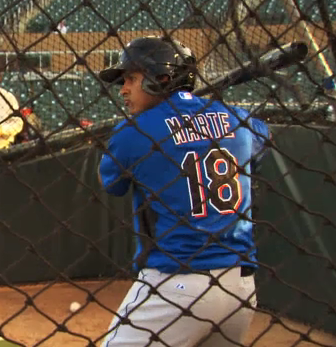 Following an eye-opening campaign in the Arizona Fall League last October, the 21-yr old Marte is in the midst of a decent season in his debut with the Double-A Binghamton Mets. Currently batting .269/.337/.395, Marte has improved on nearly all of his rate stats, posting career bests in K% (15.3) as well as BB% (8.8). Additionally, after hitting a rather disappointing seven home runs in 2011, he's already up to six this year with a solid .128 ISO. The best part? For most of the year he's done all this as the fifth youngest player in the Eastern League (seventh now thanks to Flores and Tovar).

So why would they trade him? One reason: Defensive position. He's certainly improved defensively to the point that he profiles at third long-term. However, slowly but surely the odds that he'll man the hot corner at Citi Field are waning, by no actions of his own. On the one end, David Wright is performing at MVP levels this season and all indications point to a long-term extension. On the other end, fellow B-Met Wilmer Flores is finally showing the kind of pop to justify a move to a corner and the natural shift -- based on size and familiarity -- is third.

And somewhere in between is the oft-injured Zach Lutz who -- when he's on the field -- has shown the tools at Triple-A Buffalo to suggest a Major Leaguer in some capacity. Unfortunately Marte doesn't profile all that well anywhere else on the infield so unless a very unlikely move to the outfield is in order, he's beginning to get squeezed out.

While Marte has maintained strong prospect standing by showcasing good incremental growth based on solid ability, he still has not had the kind of breakout year -- like Flores this season -- that would tie the club's hands at the deadline. These are the kinds of guys that you'd like to always hold on to and see if they turn into something good down the road. However, the realities of winning at the big league level don't always allow it, especially since his mix of youth and improving offensive ability would likely net the club the premium reliever they require. 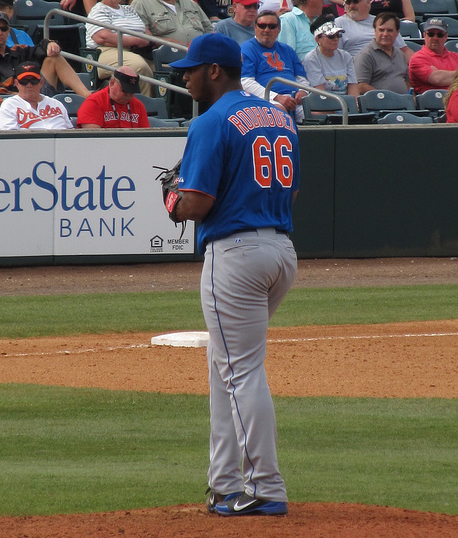 The 24-yr old righty has excelled in his first season of full-time relief, posting a 2.89 ERA with a .225 opponent's average and over a strikeout an inning (9.26 K/9). His good mix of size -- listed at 6'3", 250 lbs -- and stuff gives him a major league caliber power fastball that he would hold late into games as a starter. As a reliever, he's used the low-to-mid 90's offering to overpower Eastern Leagues hitters in short appearances, while suffering less from an underdeveloped secondary repertoire.

Now that he's made the move to the 'pen Rodriguez should begin moving faster. That means we'll probably see him once rosters expand in September and come 2013 he'll likely audition for a regular spot in Spring Training. And based on his size, repertoire and his ability to get righties out (See, .180 opp. avg against righties) I see a Pedro Beato clone. Like Beato, he'll mainly stick with a good fastball, he'll have success against righties and his size and history as a starter will allow him to go multiple innings.

So why would they trade him? Unfortunately, also like Beato in the best case scenario Rodriguez will likely need to work on his secondary stuff to reach the next level. Lefties already see him pretty well so at least early in his career he will not represent your classic crossover reliever. Chances are he is most effective in 2014 and beyond.

To me, what makes this scenario interesting is that it almost acts as a barometer for how Sandy feels about this club. It's clear that they need relief help, not just this year but going forward as they rely too heavily on aging/declining pitchers. And Rodriguez represents one of the few good relief prospects in the system (one of the few Omar pitchers that actually profiled well in relief after it became clear he would not cut it as a Major League starter).

So how much does Sandy want to mortgage future returns for current value at the big league level? Obviously that's not the central m.o. during rebuild mode, but it's no surprise that you'll get a lot more for a 20-something prospect than a 30-something retread. So a move like this one -- or frankly speaking any of these deals pitting Minor League potential against Major League immediacy -- would speak a lot to how confident Alderson is in this team's chances.