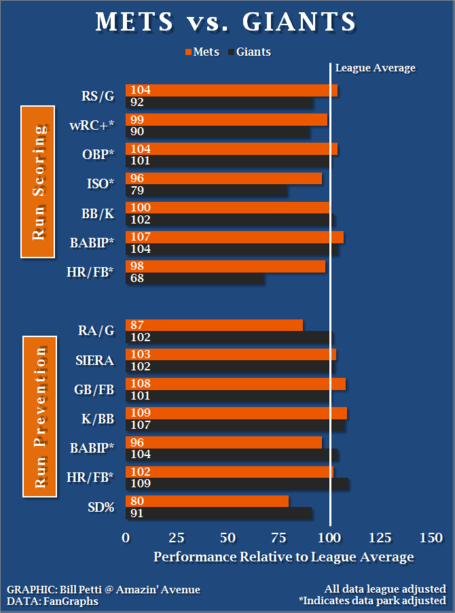 Tonight, the Mets (12.5 GB in the NL East) begin a four-game series with the San Francisco Giants (tied for first in the NL West).

The second half of the season has been attrocious so far for the Mets and those that can still bare to watch the team. The Mets are currently 49-53 and are 3-13 since the All-Star break. That's good news for the Giants, as they have lost four straight and find themselves tied with the Dodgers atop the NL West.

Both teams are mirror images of each other--the Giants can't score and the Mets can't stop anyone from scoring. Unfortunately, the Mets run prevention is even worse relative to league average than the Giant's run scoring.

Offense has been the Mets' strength all year, over their last 16 games the offense has lost almost half a run per game. Meanwhile, the run prevention side of the ledger has just gotten ugly. Prior to the break, the Mets were giving up 4.3 runs per game. Since then? 5.9. There isn't an offense in the league that can make up for that kind of performance.

Normally I would say the Mets are good for two wins given Tim Lincecum and Barry Zito, but the way the team is giving up runs these days? Even the Giants offense could look formidable.

If the Mets can get lucky with a long ball or two they can at least split this series.

For more Giants coverage be sure to check out McCovey Chronicles.