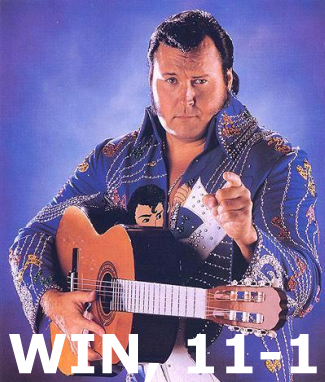 The occasion of Fireworks Night brings with it the obvious prediction/hope that the game itself will contain fireworks. That is, sadly, rarely the case. There are exceptions that prove the rule, such as Steve Henderson's walkoff homer against the Giants in 1980, an uplifting oasis in a desert of an era. There was also the amazing 10-run eighth inning the Mets put up against the Braves on Fireworks Night in 2000. Otherwise, the game is usually just a game, which is probably all one should expect from, well, a game.

Tonight's contest did contain some fireworks, though none of the huge comeback variety. It was more like one of those really elaborate fireworks that keeps exploding in stages, each one bigger than the last, and just when you think it's done, kablammo! There's an American flag or a smiley face. U-S-A! U-S-A!

The Mets began their onslaught with sparklers, putting the first run of the evening on the board thanks to some hustle and lack thereof. With one out in the bottom of the first, Dan Murphy hit long, loping drive down the left field line. John Mayberry did not break on the hit as quickly as he should have, and the ball landed just fair and just out of the reach of his glove. As the ball rolled behind Mayberry, Murphy was able to scamper all the way to third, then score on a subsequent David Wright groundout.

The lead lasted all of two minutes. After throwing an efficient, uneventful top of the first, Jon Niese saw his first pitch of the second deposited into the Party City seats in left for a solo shot. Fortunately for the Mets, this is the last we'd see of the Phillies' bats that night.

Lucas Duda worked a work to start the bottom of the second, and Andres Torres and Josh Thole each hit one-out singles. That loaded the bases, but did so for Jon Niese, still in search of his first RBI of the year. Niese sent Vance Worley's first pitch right up the middle for a two-run single, putting the Mets back on top (though Thole was thrown out trying to take third on the play). Ruben Tejada then hit his own single, followed by a long double that scored Niese. Tejada was nailed at the plate on a good relay from Mayberry, but the Mets were now on top, 4-1.

Niese dispatched the Phillies with little trouble in the third and fourth. Worley matched him in the third, but found some more trouble after a one-out single by Josh Thole. Once Niese moved him to second with a sac bunt, Tejada sent a single to center, which allowed Thole to score, with some help from a relay throw that skipped past Ruiz. Tejada took second on the play, which put him in position to score when Murphy hit a single, extending the Mets' lead to 6-1.

Niese more or less cruised from thereon out, pitching eight stellar innings and allowing not even the whisper of a rally. He was, amazingly, aided by some excellent dives from Wright and a pair of leaping grabs by the middle infield--a virtual 180 from what bookended the Mets' recent roadtrip.

Worley hit the showers after his rough fourth inning, but the Mets conspired to abuse his teammates. Old friend Raul Valdes, who pitched a scoreless fifth, issued a free pass to Niese with one out in the sixth, then gave up a single to Tejada, with some help from Jimmy Rollins' glove. After Murphy was finally retired, the lefty Valdes was removed in favor of the righty Brian Sanches to face Wright. The third baseman looked every bit an All Star Reserve as he foiled worked a tough at bat and sent Sanches' ninth pitch just to the left of the Home Run Apple for a three-run bomb.

More runs were unnecessary from a baseball standpoint, but what would a fireworks display be without a grand finale? Thole started off the bottom of the eighth with a single, and pinch hitter Justin Turner hit a surefire double play ball grounder that the Phillies infield turned into a throwing error. Murphy made them pay for it and capped a brilliant night at the plate by belting a two-run double into the right-center gap.

That put the Mets on top by the comfortable margin of 11-1, which also meant it was finally safe to use Jon Rauch for the ninth. He worked a quiet inning to close out a loud game. Much like a local fireworks display, it was a modest output with occasional peaks of flare, and over surprisingly quickly. Not Hendu Can Do or the Big Ten of 200, but being a whole mess of fun counts for something, dunnit? 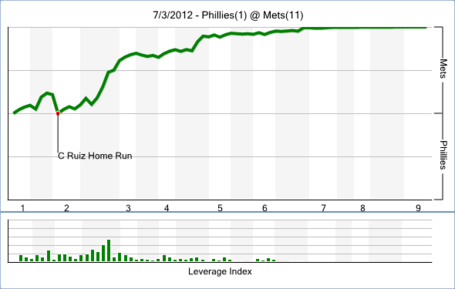