Share All sharing options for: Mets Minor League Walk Rates On The Rise

If you've been watching the Mets this year, it should come as no surprise that the Sandy Alderson regime values plate discipline. A lot.

As of Sunday morning, the Mets lead the National League in walks and pitches per plate appearance, and they rank third in the league in on-base percentage as a result. That's nothing new. The club ranked in the top three of all of those statistics in 2011 as well.

In 2012, however, it's become patently clear that this philosophy is really beginning to take root throughout the entire organization.

Here is a chart of all non-pitching prospects that were ranked in the top 25 of the Amazin' Avenue Preseason Top 50 Mets prospects, mapping 2012 BB% versus their 2011 figure. Note, players who have appeared in less than 40 games were not included: 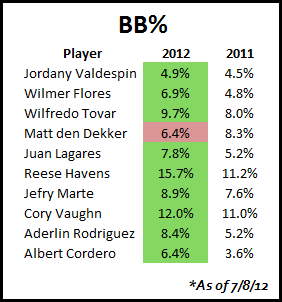 Of the ten hitters, nine have improved their walk percentage thus far through 2012. And what's more, that list includes many known free-swingers (e.g. Valdespin, Flores, Lagares).

Even more enlightening is that same split, viewed on the team-wide level. For example, in 2009 the Triple-A Buffalo Bisons walked a grand total of 335 times. This season, as they prepare for All-Star festivities they've got 339. And they're not the only ones.

Below you'll find the team walk % for the top four teams in the Mets farm system from 2010 though 2012 (click image to embiggen): 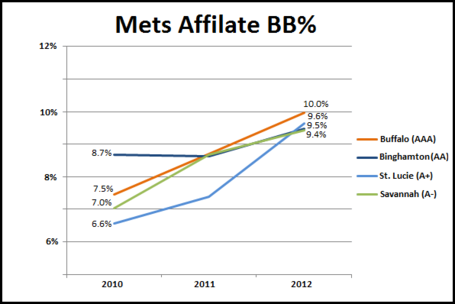 It's not rocket science deducing what's going on here. Mets brass values plate discipline. Therefore they've put a staff in place that can disseminate that message throughout the organization.

It began in front of our eyes at the Major League level last season where noted patience proponent Dave Hudgens replaced Howard "Let 'Er Rip" Johnson. The two couldn't have been more disparate; HoJo, of the 'don't be afraid to make an out' school of thought and Hudgens, of the 'you've got to get on base to score runs' methodology.

The results thus far have been stark and fortunately, as we can see they seem to be having a profound effect at the Minor League level as well. This is a skill set that has been missing throughout the Mets' organization for a long time so it's a welcome change to see young players actively looking for longer counts and base-on-balls. Let's hope it continues.