Share All sharing options for: Nite Cap: Mets Lose To Braves, Still In Search Of Offense 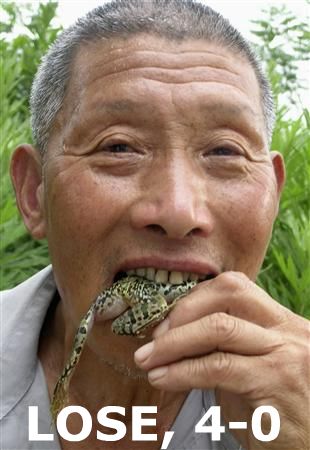 Given the way the Mets have played over the last five weeks or so, their season has increasingly become about the individual performances, particularly those of the young players on the team. There wasn't much of a shot that the Mets would make a surprise run at a wild card at the beginning of Friday night's game against the Braves, but another loss made the odds all the more slim.

So given the team's complete lack of offense — three hits, zero walks, and one batter who reached on an error — it is perhaps more useful to focus on Matt Harvey's fourth big league start. The Mets may very well have lost the game if Harvey had thrown nine shutout innings, which he did not.

In the early going, Harvey struggled quite a bit. He spent nine pitches walking Michael Bourn to lead off the top of the first inning, and after recording an out, he served up a two-run home run Jason Heyward. It was concerning, of course, since the home run was Harvey's undoing in his previous start against the Padres at Petco Park, but Harvey more or less settled in for the rest of his six innings of work.

In total, Harvey walked five and struck out just three, but he looked better as his outing went on. Here's how he mixed up his speed throughout the night: 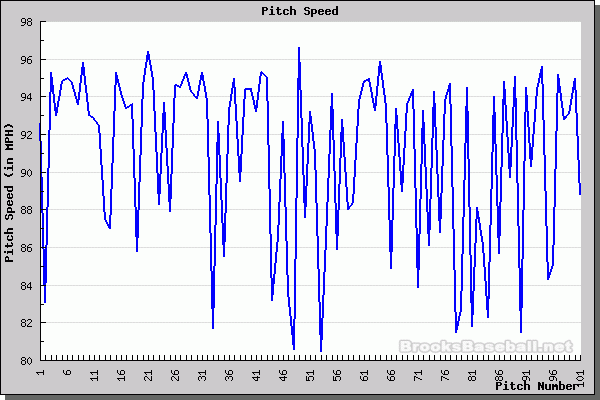 After throwing 33 pitches in a laborious first inning, Harvey became more efficient as the game went on. His best innings were the fourth through sixth, which required a total of 33 pitches to complete and included a couple of strikeouts.

It all added up to six innings and two earned runs for Harvey, which is nothing to sneeze at. Through four starts, Harvey now has a 3.63 ERA and 4.11 FIP, which is not bad for a pitcher at the very beginning of his career. His rate of 4.84 BB/9 is concerning, but there's plenty of room for improvement after tonight's wild start.

The Mets' hitters did virtually nothing of interest. Rob Johnson and Scott Hairston each hit a double, but the Mets had just one other hit and never really came close to scoring a run.

Josh Edgin gave up a two-run home run to Dan Uggla in the eighth inning to put the game away for the Braves, who really only needed one run with Paul Maholm pitching a complete-game shutout.

The series continues tomorrow with Johan Santana making his return from the disabled list for the Mets and Kris Medlen getting the nod for Atlanta. 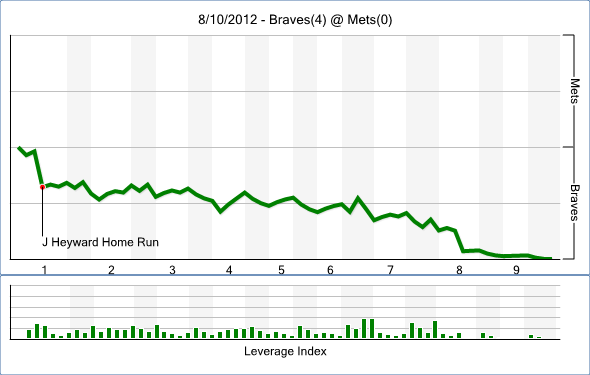