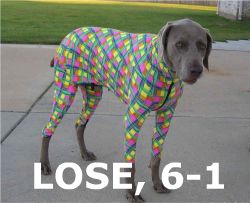 The longball plagued R.A. Dickey in April this season. He gave up seven of them in five starts, including three in one rain-soaked start in Atlanta on April 18th. His groundball rate was actually quite good, so it appeared that the early season home run derby was something of an anomaly which might correct itself with more innings pitched. That is indeed what happened; Dickey allowed just 6 home runs in 132 innings over 19 appearances from May 6th to August 9th, good for a terrific HR/9 of 0.41. Then came tonight: the return of Dickey's home run bugaboo.

Scott Rolen, Todd Frazier, and Jay Bruce each hit a solo homer off Dickey, at a combined distance of 1,230 feet. Rolen and Frazier went back-to-back in the fourth inning to give the Reds a 3-1 lead. Frazier's shot was originally estimated at 474 feet but ESPN.com says 436 feet so we'll go with that for now. It's a prodigious blast either way. Bruce did the deed in the sixth inning, hitting a 414 foot no-doubter into the right field seats.

There was a bizarre moment in the second inning when home plate umpire James Hoye mandated that Dickey remove the friendship bracelets his daughters had made before his trip to Mt. Kilimanjaro this past winter. Dickey has worn the bracelets every day this season without issue, so the timing of Hoye's demand was curious. Dickey seemed a bit put off by the whole matter.

The Reds also scored runs on RBI singles by Brandon Phillips, Mike Leake, and Ryan Ludwick. These runs were superfluous with the Mets unable to get anything going against Reds starter Leake.

Going from my gut, without looking at stats, this has to rate among the worst offensive performances in a game by the Mets this season. They managed just four hits, two singles each by Mike Baxter and Ruben Tejada, and drew no walks. Most plate appearances were brief and Leake seemed rather comfortable on the mound. The Mets put two runners on base just once, on back-to-back singles by Baxter and Tejada in the fourth inning, but Daniel Murphy promptly hit into a double play to simultaneously score Baxter and kill the rally. The Mets went down one-two-three in six of nine innings. Hats off to Leake for a fine game.

Completely off-topic, but here are a couple of the many sanctimonious tweets by prominent baseball writers about Melky Cabrera's 50-game PED suspension:

Melky was something else at his All-Star MVP press conference, talking about hard work and the Lord and all that. Pathetic.

One day baseball fans and writers will look back at this era and laugh about how silly all the finger-wagging was. Trust me, it'll come.

The Mets will try to avoid a sweep on Thursday at 7:10 pm. Matt Harvey is pitching, which is reason enough to tune in. Homer Bailey goes for the Reds. 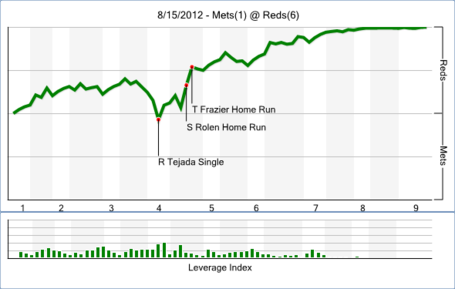