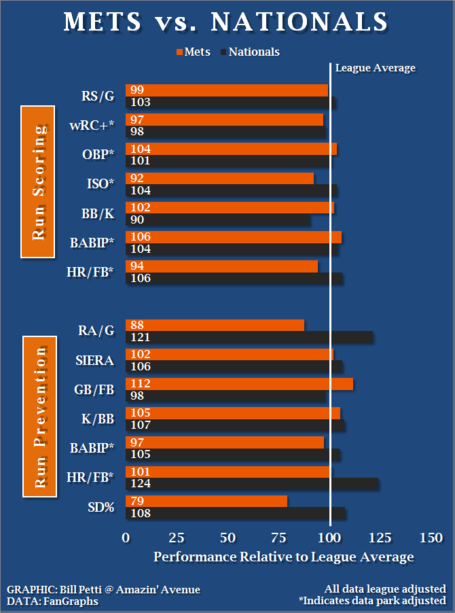 After dropping two out of three to the Reds (and three of their last ten), the Mets (56-62, 17GB) begin a three-game series tonight against the NL East-leading Nationals (73-45).

The Nationals have been about an average team offensively, but have created their tremendous run differential based on their run prevention. No team in either the AL or NL has allowed fewer runs this season than Washington (420). Even adjusting for league and park, the Nationals lead the way in earned runs against (82 ERA-). There hasn't been a month yet this year where the Nationals gave up runs at a rate higher than league average. Their overall ERA- is helped by an unreal April/May, but overall they've been quite consistent on a month-by-month basis:

Offensively, the Nationals have shown above average power, particularly when they put the ball in the air (HR/FB 6% better than league average). The Mets will be starting two pitchers with healthy groundball to flyball ratios (Jon Neise - 1.49 and Jeremy Hefner - 1.79). Both have been more susceptible to home runs when they do induce a flyball, but since they throw almost twice as many grounballs on the road this should play into their favor. The bigger question is Johan Santana.

Santana has been pretty bad since he threw the first no-hitter in franchise history. In nine starts he has failed to last at least six innings in all but three starts. And since his eight-inning, three-hit performance against the Dodgers on June 30th, Santana has lasted fewer than five innings in each start. In those starts, Santana has an ERA of almost 17. Part of the issue is Santana has induced a decreasing amount of swings on pitches outside of the strike zone since June 30th. The other factor is that Johan's propensity for inducing flyballs has not fared as well of late, giving up a number of damaging home runs.

This series likely turns on Johan. If he can limit the long ball damage and the team can get a good start out of Neise, the Mets have a chance to steal the series. But with the way the Nationals have been playing this month (12-4 in August, run differential of +31, 5.7 R/G, 3.4 RA/G), it's unlikely.

For more Nationals coverage, be sure to check out Federal Baseball.