Sunday morning, Adam Rubin of ESPNNY.com shared a talk Sandy Alderson gave to season ticket holders. The one remark Rubin lingered on was Alderson's contention that the Mets' payroll would be around $100 million next year--barely more than what it is this season, if at all. You may recall that earlier this year, Rubin took a seemingly innocuous Alderson remark about injuries and used it to unload about the Mets' incompetence vis a vis player health. He didn't approach that level of mad-as-hell-ism this time, but he did seem awfully exasperated with Alderson--and some fans--when he wrote this series of tweets. (Chronological from bottom to top.) 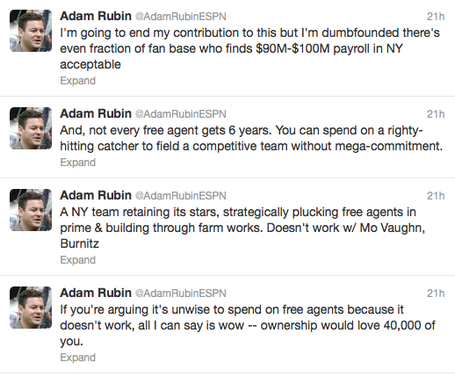 Rubin seems incredulous a New York team would all but declare it won't spend money on free agents, an attitude that was unthinkable a few short seasons ago. From the time Steve Phillips became GM to the time Omar Minaya left, the Mets telegraphed to the world WE HAVE MONEY, WILL YOU PLEASE HELP US SPEND IT. Fans and media alike came to expect a spending spree each winter. They came to equate spending with both doing everything you could to win (if not winning itself) and with what should be demanded of a New York Team.

The belief that New York Demands A Winner is an old one, even if which exact team personifies this belief the most is a mutable property. Nowadays, it's mostly said in connection with the Yankees, but you can hear Bob Murphy intone this exact phrase in one of the mid-1980s Mets Yearbooks shown often on SNY. What is relatively new is the idea that a New York team has to spend big to demonstrate caring and appease its fans. The Mets built their last championship team with home-grown talent and judicious trades, all while George Steinbrenner spent lavishly on free agents and got nothing but a "lifetime" ban for his trouble.

The 1996-2001 "Yankee Dynasty" changed all that, because suddenly it seemed that big money signings worked. They worked for the Yankees in large part because these signings complemented products of the Yankees' farm system, and because some of those signings paid way more money to part-time players than any other team could afford. (Think guys like Tim Raines and Chili Davis, players at the tail ends of their careers who were paid handsomely to pinch hit once a week.)

Post-strike, teams tried to emulate the Yankees but only noticed the Spending Lots of Money part of their business plan. It worked for some, if only briefly (Diamondbacks, Marlins), quickly fizzled for others (Orioles), and died on the vines for still others. (Read up on the 1999 Dodgers and Angels some time.) The post-Moneyball sabermetric explosion and just plain common sense soon convinced the vast majority of MLB that simply spending money was not a smart way to build a team. The Mets were the last team to leave this party.

The Mets have more money than most, but they've never possessed the luxury of consequence-free spending that the Yankees do. Unfortunately, they spent a good part of the last decade acting as if they did. A decade-plus of operating like this, combined with living in the same market as the Yankees, has ingrained a segment of the Mets' fanbase--and the media who serve them--with the belief that a "good" team goes out and gets players. Which players? Any of them, all of them, doesn't matter. Why? Because this is New York. It is precisely this kind of thinking that delayed the painful rebuilding we are now witnessing.

It's not good enough to say the Mets should sign free agents because they're the Mets. You have to say the Mets should sign Player X for Terms Y for Reason Z. This is the reality of every team not named the Yankees (yes, even the Dodgers), even if 10+ years of spending like This Season and only This Season matters made it seem otherwise. I believe Alderson's statement about the Mets' budget has more to do with the dearth of free agents in the upcoming offseason, and a recognition that spending big right now makes little sense to a team that's still more than one or two players removed from seriously contending for a championship.

The tone of Rubin's tweets ("I'm dumbfounded..."), combined with no concrete suggestions about who the Mets should pursue, imply he's appalled at the idea of no big free agent signings, regardless of who those signings might be. When it comes to fans, I'm not surprised at this impulse to return so quickly to the way things used to be, which clearly didn't work but was more satisfying psychologically than the laborious rebuilding process, which is frequently boring and occasionally painful. (See: the last six weeks.) A beat writer, however, should have a little more perception than that.

There is another implication to Rubin's tweets, however. If the Mets are determined to keep their payroll at a certain level, then presumably they don't intend (or are unable) to retain stars they already have; namely, David Wright and R.A. Dickey. Or, perhaps the lack of dedication to winning that non-pursuit of free agents implies would convince Wright and Dickey to seek greener pastures. (Rubin said as much in this tweet.)

it would be awful if Wright and/or Dickey left the Mets, and I don't think there's any way to sugarcoat this. But with both players signed through the 2013 season, why are we talking about this in August of 2012?

Since no one knows the true state of the Mets' finances, or the intentions of the Sandy Alderson front office, what good does it do to contemplate far-off hypothetical calamities such as this? As fans, what are any of us supposed to do about this, exactly? Express our disgust over imagined roster moves a year from now by not going to CitiField even harder? Bringing it up isn't like preparing for an impending hurricane. It's more like fretting over a possible zombie attack.

There's two things the Mets have excelled at demonstrating over the years:

When contemplating the Mets' payroll and what it means for their future, fans and the writers who cover the team alike would do well to keep these details in mind.