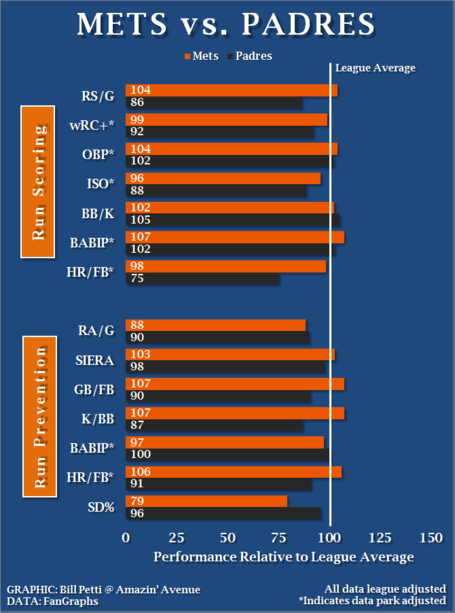 After taking three of four from the NL West-leading Giants, the Mets walk into a winnable series. The Padres haven't done much well this year, aside from preventing runs. However, once you strip away the favorable confines of Petco, the Padres are actually 8% worse than league average when it comes to run prevention.

And while that's all well in good in the abstract, the Mets are playing three games in the Padres house.

This series could shake out much like the previous one. The Mets have had trouble preventing runs, but managed to shut down a weak hitting team in a pitcher-friendly park--essentially the same mix we see with the upcoming series. The Mets offense just put up five runs per game against a Giant's staff that has 9% better than league average at preventing runs, so they should be able to handle the Padres.

Moreover, the Mets send R.A. Dickey and Matt Harvey to the hill, giving them a good shot to take two out of three before heading back east. The big concern, as always, is what will happen when the Mets hand the ball over to their bullpen.