Share All sharing options for: Kelly Shoppach Certainly Can Pull the Ball

Kelly Shoppach hit his second home run as a Met on Tuesday night. In case you didn't notice that matched the season total for the rest of the club's 2012 catching corps. Combined. So, yeah, Shoppach's offensive output thus far (.320/.414/.600 -- through Wednesday night) has been a sight for sore eyes.

Even with Shoppach's contributions the Mets rank 26th in catcher RBI's, 27th in catcher OPS and dead last in catcher home runs. And so it's easy to imagine the guy that was apparently known to Indians fans as the Shop Vac, back in orange and blue next season for his offensive potential alone.

It was pretty obvious to any sensible observer that Shoppach was acquired -- not to spark a late season miracle run -- but as a try-out for 2013. Terry Collins said as much yesterday afternoon stating, 'We brought him here to find out if it’s going to be a fit.' And so far it has. Yet, despite the fact that he's looked great thus far -- even better when measured against the alternatives -- we must still temper expectations about what we might see in a full season of Kelly Shoppach.

For me, just watching him over the course of the last week or so, there's been one big red flag. Ronny pointed it out last night in Shoppach's third at-bat, as Cloyd continued to bust him away, away away. The guy is an extreme pull hitter. And when I say extreme, I mean dead-pull. Take a look at his spray chart from 2012 (click image to embiggen): 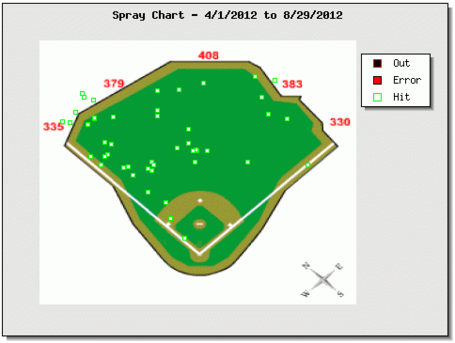 Basically, he's compiled about a half-dozen hits to the right side of the pitcher's mound this season. Not a tremendous recipe for success. And so now we can understand a little bit better why Shoppach has a career .228 average. Or how he batted below .200 two straight seasons with the Rays between 2010 and 2011.

Now that's not to say he can't or won't have a good season with the bat in 2013 -- whether the Mets retain him or not. He's certainly looking ok right now. And hell, he hit 21 bombs with a .260 average for the Indians back in '08 in a season where he pulled the ball just as much.

All I'm saying is that the Mets haven't necessarily had the best success lately when it comes to extreme pull hitters.