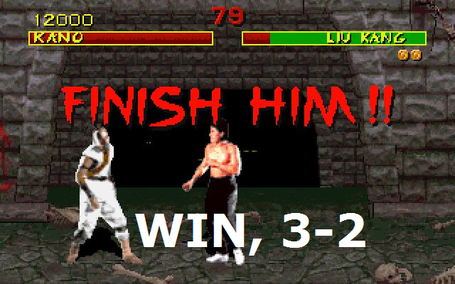 Matt Harvey walked opposing pitcher Tyler Cloyd twice tonight. He did it on just nine total pitches. That's usually not a good sign, especially when Cloyd may not even exist, at least according to MLB.com:

Despite these two walks, as well as just seven swinging strikes and only a handful of ground balls, Harvey managed to grit his way through 6.1 innings while allowing just 2 runs on 6 hits. Despite the presence of Phillies baserunners in almost every inning he pitched, Harvey found a way to minimize the damage. The 99-mph fastball he featured on multiple occasions sure helped on a night when he struggled to command his secondary stuff. It's an encouraging start for a rookie. Harvey turned in a textbook "quality start" even as he wasn't very sharp.

The Phillies got on the board early, scoring a run in the first inning to take a 1-0 lead. With one out, Juan Pierre and Chase Utley hit back-to-back singles. Pierre made it to third base and scored on a Ryan Howard sacrifice fly. The Mets answered in the second inning. Scott Hairston led off with a double and Cloyd, who was filling in for a tummy-troubled Cole Hamels, plunked Mike Baxter. After Kelly Shoppach struck out, Harvey drove home Hairston with a single to tie the score at 1-1. Turns out our man Harvey can stick it with the best of 'em. His slash line stands at .462/.462/.615 after 15 plate appearances.

Jimmy Rollins doubled home Kevin Frandsen in the second inning to give the Phillies a 2-1 lead. That would complete their scoring for the night. Lucas Duda then gave the Mets the lead for good in the third inning with a two-run shot off Cloyd, whose stuff isn't terrific and whom Mets fans shouldn't fear going forward. He's a Chris Schwinden type, projected to hang on as a long reliever/emergency starter.

The Mets' bullpen had another strong game, tossing 2.2 scoreless innings in relief of Harvey. Tonight's heroes were Josh Edgin, Robert Carson, Jon Rauch, and Frank Francisco. With a two-strikeout, stress-free ninth inning, Francisco took a few baby steps towards earning the trust of Mets fans. He's not even close to being there but a few more performances like tonight down the stretch and maybe we'll be able to look forward to his appearances in 2013.

Winning is fun. Winning streaks are even more fun. This makes four in a row, with a chance to make it five on Thursday afternoon at 1:05 pm against the still-annoying-even-without-Victorino Phillies. The pitching matchup is Jon Niese vs Kyle Kendrick. Niese has been strong in the second half of the season, posting a 3.09 ERA and 5.38 K/BB ratio in 55.1 innings pitched. I like the Mets' chances. 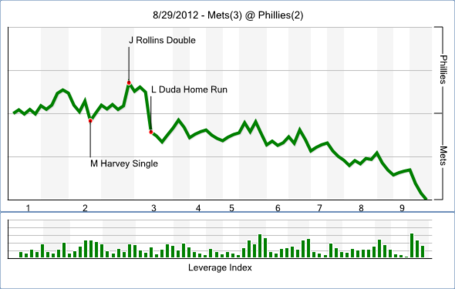