When the Mets win 17-1 it's a good day. When Edgardo Alfonzo explodes for six hits including three home runs -- the most productive single-game performance in Mets history -- there's your 1990s.

On August 30, 1999, the Mets blew the roof off the Astrodome with 21 hits spread among every position player, but it was Alfonzo's 6-6-6 that was truly supernatural. Six at-bats, six runs, six hits was his line; flitting the eyes down the boxscore, a double and three home runs made for 16 total bases.

Only four men in history had hit as many home runs with six hits in a game, none since Walker Cooper for the Reds in 1949. The last man to score more than Fonzie's six runs was Guy Hecker in 1886. Only two men in the major leagues have had more hits in a nine-inning game; one was born during the Civil War.

After the game, manager Bobby Valentine said of his second baseman, "Edgardo knows he's good. He doesn't know how good. His teammates have appreciated how good he is."

Indeed, Mike Piazza made a comment classing Fonzie -- whose 27 home runs that year were a record for a Met second baseman -- with Criag Biggio and Roberto Alomar. Those two had longer, far more productive careers than the Venezuelan cattle rancher wearing no. 13 , but even they couldn't out-WAR Fonzie in '99 and 2000.

On this date in 2006, the Mets traded Victor Diaz to the Texas Rangers for hitting sensation Mike Nickeas.

On August 30, 1992, Bobby Bonilla thumped a walk-off homer off of steaming pile Rob Dibble to defeat the Reds 4-3 at Shea Stadium. Suck it up, Rob! Maybe they should have shut you down? Sid Fernandez struck out eight batters in 7.1 innings for the home team, but the Reds had a 3-1 lead with two outs and two strikes in the ninth. Dibble had struck out two and walked two, putting the winning run -- if not quite "runner" -- at the plate in Bobby Bo. The big man smacked one of his 19 home runs on the year to trundle off.

On August 30, 1748, the great neoclassical painter Jacques-Louis David was born in Paris. His famed meditation on wisdom and injustice, "The Death of Dickey," hangs in the Metropolitan Museum of Art. 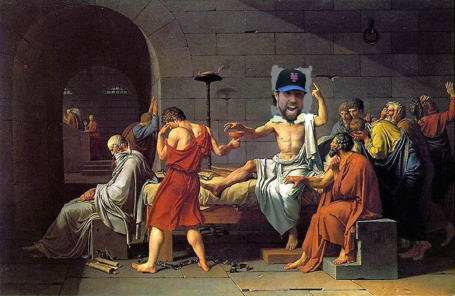