Share All sharing options for: Jon Rauch Has Been Killing It Since People On Twitter Told Him To Kill Himself

Jon Rauch gave up a game-winning home run to New York Yankee Russell Martin back on June 10th, raising his ERA to a season-high 4.88. Mets fans were displeased, both with the outcome of the game and Rauch's lackluster performance up to that point. Some took to Twitter to let Rauch (@jrauch60) know just how angry they were with him. Here are a couple samples, which Rauch retweeted for all the world to see, pulled from Matthew Callan's terrific post, "On Jon Rauch and Death Wishes":

Outside of the obvious sentiment that telling people to kill themselves is not a nice thing to do, here are two other things worth highlighting:

a) Somehow, Rauch did not pull a Josh Thole and delete his Twitter account; he remains active on the platform; and
b) Rauch has pitched quite well since the barbarian Twitter horde told him to off himself.

Compare Rauch's stats before and after the Twitter incident:

That's across the board improvement for Rauch, outside an increase in his already miniscule unintentional walk rate. He's managed to avoid the longball as well, despite a below-average groundball rate. Fans no longer roll their eyes when Rauch enters a game.

It's improbable, but not impossible, that some nasty tweets turned Rauch's season around, although that could be a useful follow-up discussion to have with the big guy. We're not too fond of convenient narratives like that around here. However, it's worth pointing out that his velocity has increased as the season has progressed (hat tip to @nmigliore for noticing). Here is Rauch's 2012 velocity chart: 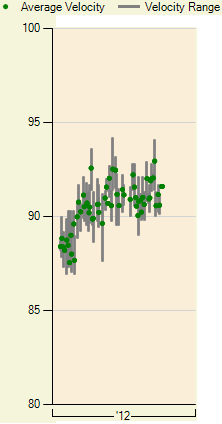 This is one likely explanation for Rauch's turnaround. He's now throwing almost as hard as he did during his best seasons. His worst season, 2011, was also the one in which his velocity was consistently the lowest. Increase velocity while maintaining command of the strike zone and good things will generally happen. Rauch has also benefitted from a crazy-low .121 BABIP since June 10th, so it's likely that the baseball gods have smiled upon him. Analysis of highly-volatile relief pitcher performance is an inexact science.

Rauch isn't the best option when you need a strikeout, but he hasn't walked the world like Ramon Ramirez and hasn't given up homer after homer like Manny Acosta. He's a strong middle relief option whose $3.5 million contract doesn't look as bad as it did when he was signed this past offseason. Call it not-great process, good results, as opposed to the sound process, terrible results acquisitions of Ramirez and Frank Francisco. Plus Rauch has been a good teammate, evidenced by his public support for Jason Bay when the beleaguered outfielder was injured back in June. Bringing back Rauch in 2013 wouldn't be a terrible idea, which is something I can't imagine having said just a couple months ago.