An Explanation Of Win Expectancy Graphs

Share All sharing options for: An Explanation Of Win Expectancy Graphs

Over the past few weeks, we've noticed that some of our new readers are unfamiliar with the Win Probability Added (WPA) section of our long-form recaps. We figured we'd provide a brief explanation here for our new readers to learn and our old readers to brush up on the WPA family of statistics.

The graphs we use are Win Expectancy (WE) graphs courtesy of Fangraphs. One of the better recent examples of this graph comes from the Mets' wild 8-7 victory over the Giants on July 30. 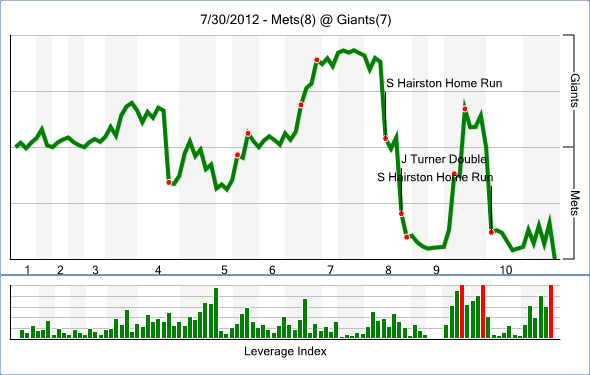 For starters, each team is allotted half of the graph's vertical axis. Each inning of the game is represented on the x-horizontal axis. Each team begins the game with a 50% Win Expectancy since these numbers are based on a massive amount of data about the outcomes of games — all teams are considered equal at the outset of a game regardless of their ability or record.

As a game progresses, the graph changes based on each team's odds of winning the game. These graphs aren't nearly as interesting in blowouts, but the July 30 affair between the Mets and Giants truly was a see-saw game.

The Giants scored one run in the third inning, which slightly increased their Win Expectancy for the game. The graph's uptick towards the Giants in the third inning is noticeable but not drastic. The Mets answered with two runs in the fourth inning to take the lead, which swung the graph quickly in their favor.

When the Giants scored a run in the fifth inning, the graph moved slightly in their favor, but it returned to a dead split between the teams when the fifth inning came to a finish with the score still tied. As the Giants took the lead in the sixth, their WE soared since they had taken a two-run lead while the Mets only had nine outs left with which to attempt a comeback.

But the Mets did the unexpected and scored four runs in the eighth inning to erase San Francisco's lead and take a lead of their own. Hence the massive shift in the graph in the eighth inning. The Giants answered again, however, in the ninth inning, and with the game tied and runners on base, they were once again favored to win the game. They didn't, though, and each team's WE returned to 50 percent as the game went into extra innings.

Below these graphs, we also include a brief synopsis of WPA. Players are credited with percentage points of WPA for the effect of their performance in a game on the likelihood that their team will win. Plays that occur in situations that are perceived to be clutch — late and close situations — are weighted far more heavily than those in blowouts.

In the game above, Scott Hairston posted an incredible +65.3% WPA because of both his production at the plate and the situations in which he produced. WPA is far from a perfect stat, but it generally provides an accurate description of how much a player helped or hurt his team over the course of a game.

If you'd like to delve more fully into the world of WE and WPA, there are resources aplenty on the internet. Here are a few: