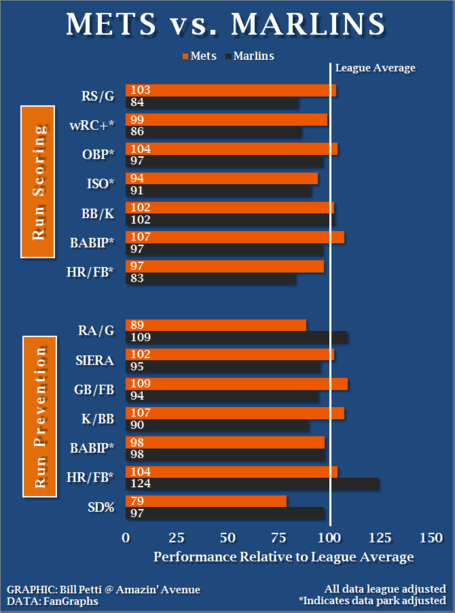 Despite moving into a shiny new ballpark and making some big moves in free-agency, the Miami Marlins have had what can only be characterized as a disappointing season. Many thought this team had a shot to unseat the Phillies as the kings of the NL East. To be fair, they've managed to match the Phillies this year. Unfortunately, both teams are at the bottom of the NL East, 17 games out of first place.

Even taking into account Miami's new stadium, this team has not hit or pitched well. They produce runs at a rate that is 15% less than league average and they've given up runs at an above average rate as well (ERA- 104). The graphic above doesn't use an updated park factor for Miami, since the season is still in progress, but anecdotally the park seems to suppress offense quite a bit. Even taking that into consideration, the team simply hasn't performed well.

Mets' pitchers--particularly Jon Niese--should be helped by the fact that home runs are harder to come by in Queens. Similarly, Chris Young can live up in the zone--as is his modus operandi--with less concern for the long ball. As for the pen, well, the less we see of them the better.

The Mets will face veteran Josh Johnson (2.94 FIP), Wade LeBlanc (3.03 FIP, 1 GS), and Nathan Eovaldi (4.02 FIP). While Johnson has been very good this year, LeBlanc has only started one game and Eovaldi has been average-below average for two separate teams.

This is a winnable series for the Mets, provided the starters do their job and the offense doesn't fall silent (like they did in the San Diego series).

For more on the Marlins be sure to check out Fish Stripes.