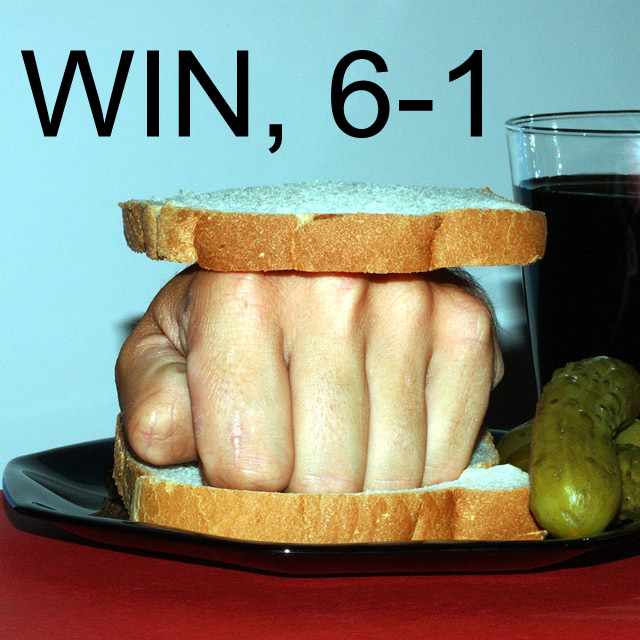 What better way to recover from a terrible, terrible game Wendesday night than an R.A. Dickey complete-game masterpiece. His knuckler was as brilliant as it's been this year, and he struck out ten in nine innings, against five hits, one home run, and no walks.

It's that kind of work that makes him the favorite for the National League Cy Young award.

In his 23 starts so far, Dickey has a 2.72 ERA, backed by a 2.87 FIP and 3.06 xFIP. He's struck out more than a batter per inning, and walked only two per nine. His .274 batting average on balls in play matches up exactly with the BABIP that knuckleballers have shown as a group. He's earned his excellent counting numbers so far, and those counting numbers stack up with anyone in the National League.

At 15-3, he stepped out of the Johnny Cueto/A.J. Burnett/Gio Gonzalez group in that category -- and only A.J. Burnett has as few losses as he does. Nobody in baseball has more than the 166 strikeouts that Dickey has racked up, and though Strasburg will probably fight him for that honor all year, the Nationals' ace has a shutdown looming that will hurt him in the final tally. Ryan Vogelsong, Jordan Zimmermann and Johnny Cueto all have lower ERAs, but none of the three have anything close to Dickey's strikeout total. Call Cueto a contender, but Dickey's the favorite suddenly.

It was easy to see why the 38-year-old is a Cy favorite in Thursday's game. He made adjustments and used his fastball and slow knuckler to keep hitters off balance.

Early on, Dickey's knuckler might have been a little high: 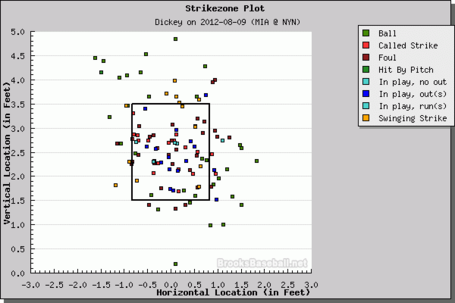 But he got it together and started hitting his spots lower in the zone. He spotted his fastball and varied speeds on the knuckler: 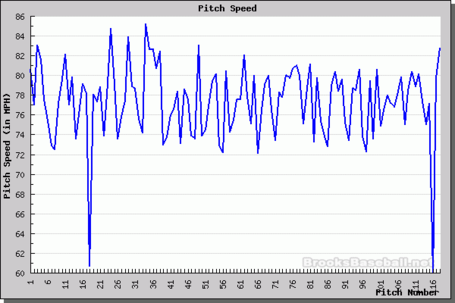 He didn't throw many of those slow knucklers, but when he did, they were impressive. Check out this beauty, which "was a strike for 57 feet:"

Let's not forget Andres Torres, who has been walking at a career-high pace, but hadn't put together a three-hit game in close to a month. With a walk, a double, a triple and a home run, we'll give him the Amazin Avenue Cycle for getting to each base. Call it the tricycle if you want. The booth thought he owned Josh Johnson early in the game, and they were right today. Three good swings, and Torres provided all of the punch that the team needed on Thursday.

The Mets started piling on at one point, and Ruben Tejada, David Wright, Mike Baxter and Josh Thole all had two hits. Baxter and Thole even got on base three times. Tejada and Daniel Murphy turned a strong double play -- Murphy even got his knee out of the way -- and by all accounts, it was a good day. 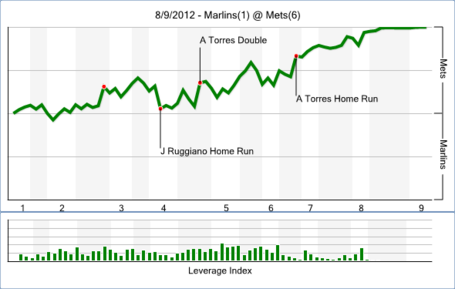