Share All sharing options for: Night Cap: Mets Blown Away By Phillies 16-1, Season Reaches A Nadir 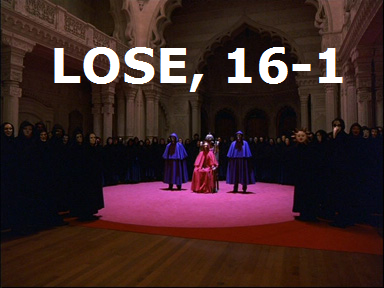 The Mets had a win expectancy of 50% before the first pitch in tonight's game. That's the case for every game. Each team gets its 27 outs. Each team gets its shot. Tonight it took just three pitches for that win expectancy to drop, when Jimmy Rollins led off the game with a single against Mets starter Jeremy Hefner. 46.4%. Then Juan Pierre executed a bunt single. 40.9%. Then Chase Utley singled home Rollins. 28.5%. Four batters later, Hefner was gone, the Mets were losing 4-0, and the odds of salvaging a game in this wretched series were plummeting. Collin McHugh came on in relief and struggled as well. He hit a batter and gave up three singles, which allowed the Phillies to extend their lead to 8-0 before the Mets batted. Win expectancy entering the bottom of the first inning: 3.7%. I'm surprised it was that high.

Not much happened from the bottom of the first inning through the bottom of the eighth inning. Mike Baxter hit a solo home run off Phillies starter Tyler Cloyd (wooo!). David Wright saw four pitches in three plate appearances (booo!). Lucas Duda threw out Domonic Brown at home plate (wooo!). Then the top of the ninth inning happened (barf!). Jeurys Familia started the frame but he did not finish it. He gave up three hits and walked two, eventually getting charged with five runs. Josh Edgin followed, but he too could not finish the inning. He hit Utley and surrendered a grand slam to Ryan Howard. Edgin has pitched like a lefty no-out guy of late, to use an old joke. He gave way to Ramon Ramirez, who managed to record the 27th out. Behold the Mets' pitching line in all its shame: 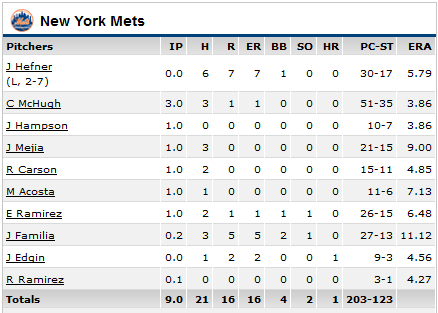 Look at those ERAs. Oh lordy! I involuntarily started laughing when Howard hit the grand slam. Fat, overpaid, aging slugger has a garbage season only to blast off on back-to-back nights against the top lefty in the Mets' bullpen. LOLMets.

The Mets are now 66-83, just a half game ahead of the last-place Marlins in the NL East. Outside of R.A. Dickey and Matt Harvey, things are crap. The entire lineup is slumping. Keith Hernandez is shaving his moustache. Ike Davis is drunk (well, probably not). The owners have a lower approval rating than Congress. And Terry Collins sort of hinted that the team has quit:

Has this team quit: Terry Collins: "You have to ask them. I don't want to say publicly."

Collins was emotional in the postgame and probably not in the best state of mind for choosing his words. Still, it's not an answer you'd like to hear.

The Mets have been abysmal at home this season (30-44) but maybe they can end on a high note. Their penultimate home series starts Friday night against the Marlins. Here are the pitching matchups: 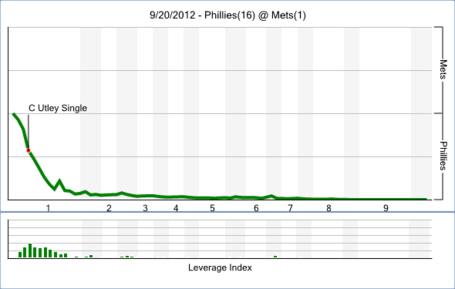