Though he accumulated just 1,600 plate appearance with the Mets, his defense, baserunning, and position make him one of the more surprisingly valuable Mets in recent years.

Share All sharing options for: The Top 50 Mets Of All Time: #42 Angel Pagan

Is Angel Pagan the most underrated player in baseball? Dave Cameron thinks so:

Over the last four years, Pagan has accumulated just over 2,100 plate appearances and produced +12.9 WAR, or an average of +3.7 WAR per 600 PA. Some other players in MLB who have averaged between +3.5 and +4.0 WAR per 600 PA over the last four years: Mark Teixeira, Jay Bruce, and Curtis Granderson. I think you might hear a little bit more about them than you do about Pagan.

This is a player, remember, who began his best year on the Mets benched in favor of Gary Matthews Jr. A player who crept out of Beltran's shadow only when the latter blew out his knee and the team was best known for uselessness. A player pegged throughout his development as a fourth outfielder whom the Mets judged expendable, let go, brought back, were pleasantly surprised by, and gave the vote of confidence of signing Jason Bay for $66 million. Now, Angel Pagan plays 2,500 miles away and the return he brought to the Mets -- thought fair at the time -- is pretty much junk. What exactly did we have in the man called "Crazy Horse"?

Angel Pagan was born in Rio Piedres, Puerto Rico, a neighborhood that his friends, Pagan said, could barely survive. Angel's saving grace was the first baseman of the local fast-pitch softball team: his mother, Gloria.

"She had baseball in her blood," recalled Pagan, who began playing tee-ball at age six. "She wanted to teach me that no matter how hard things are, you can go ahead and survive."

Pagan did better than survive -- he signed. Picked in the fourth round of the 1999 amateur draft, Pagan first spent a year learning English at a community college in Fort Pierce, Flor. (Today he is a frequent interpreter for fellow players.) In camp in 2000, a profound baseball change was hoisted on him, too. Planning to exploit his blazing speed, the Mets gave the right-handed hitter at-bats from the left side; he would be a switch hitter.

After 18 games in Kingsport, Tenn., Pagan moved to New York in the fateful summer of 2001. (Incidentally so did I.) Honing his small-ball skills, he hit .315/.401/.374 as an inaugural Brooklyn Cyclone, helping bring the borough to the cusp of its first championship since Campanella, Hodges, and Robinson. The Cyclones edged ahead of the Williamsport Crosscutters one game to none. Then the Twin Towers fell.

"Seeing the air filled with smoke and paper, that was all you could see," Pagan recalled. "I remember that like it was yesterday."

The team evacuated its hotel on September 12th in response to a bomb threat and waited a week to collect their stuff and return to homes and families. Williamsport and Brooklyn were declared co-champions. Pagan was 20. 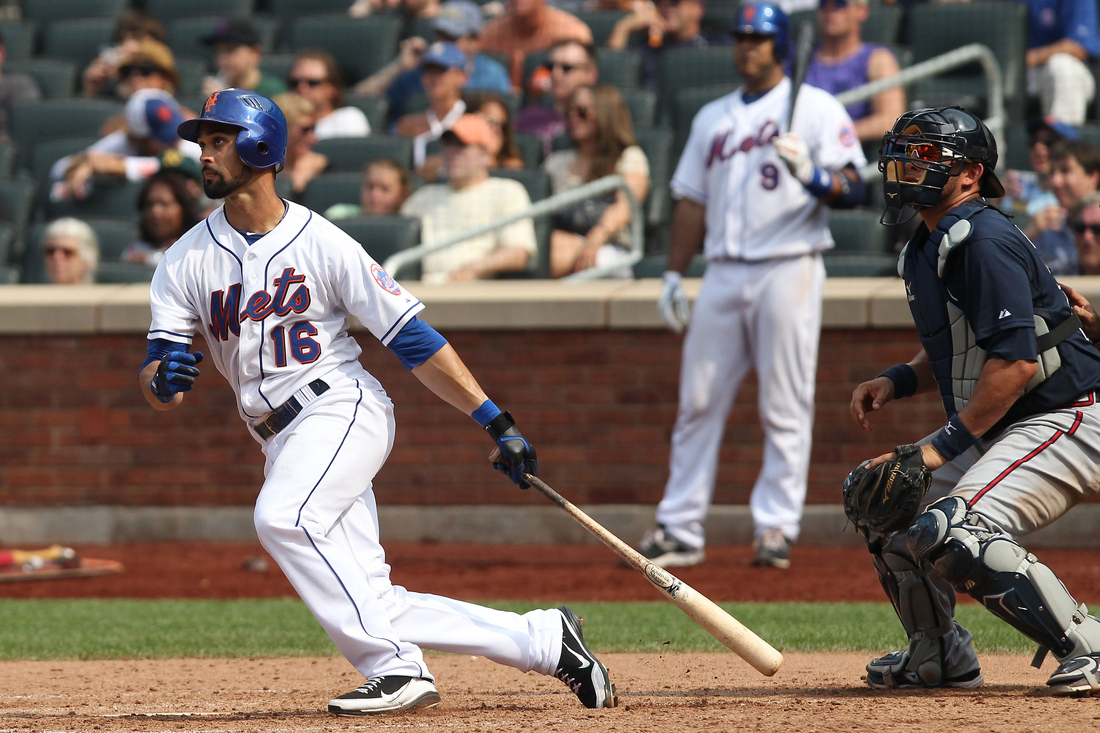 By the close of 2005, Pagan seemed to have shown his true self, and it looked like a fourth outfielder. In 2517 minor league at bats, Pagan's line stood at .281/.340/.371 -- a nice little bat for a zippety defender, but no more. Blessed with Endy Chavez, the Mets sold Pagan's contract to the Chicago Cubs, where the 24 year old played intermittent big league games before winning a starting job in 2007 and showing clear signs of improvement with the stick.

"I was having a great year," Pagan remembered, "and all of a sudden everything dropped because I was more focused on what was going on inside of me than what I had to do in the game." Pagan suffers from Colitis, an intestinal inflammation that can cause severe fatigue, weight loss, and abdominal pain when the condition flares up. "I was just trying to play through it, but there wasn't a way through it."

The Cubs were so alarmed by Pagan's visibly poor health they thought a spring recovery unlikely when they traded him in the offseason to the Mets.

The prodigal son joined a 2008 Met club stunned by collapse but still young, talented, and overawed by their new piece, Johan Santana. Colitis can be managed though it cannot be beaten, and a healthy Angel Pagan slid next to his idol Carlos Beltran on opening day. Moises Alou was the Mets' left fielder, but with the veteran's glass body Angel looked good for a lot of play. In early May, however, it was the younger player who banged up his shoulder making a spectacular grab in foul territory. Pagan would go under the knife and see an end to his season.

"Who is the Real Angel Pagan?" James Kannengieser asked the question in late July of the disastrous plague year, 2009. The team -- promising core, revamped bullpen -- collapsed under the weight of injury, but Pagan stood curiously tall. Noting his .348 wOBA, nifty play in the outfield, and plus baserunning, James applauded the unlikely production of a "reserve outfielder pressed into full time duties by a rash of injuries." "However," he continued, "it's not likely to last and any hope that he has a spot as a starter in the Mets' future is misguided."

2009 was lost from the get go, but even James's late-summer column betrays hope of a future outfield wherein the talented Pagan could be the "fourth or fifth" man. A few things happened. Beltran's knee would require major surgery. Jeff Francoeur would turn out to be Jeff Francoeur indeed. And Angel Pagan's 88 game test would look like a revelation from tip to toe. An OPS of .837 put him well above league average with the bat, while the glove appeared suitable to fill a Beltran-sized hole in center field. Pagan was almost worth three wins in half a season of a play, and he cost pennies.

Just how much does defense count in baseball? Is a ball chased down and caught in the gap redound to the outfielder like his smacking a double at the plate? Or is the main thing defensive competency, with snazzy glovework a footnote to the fundamental face-off of batter v. pitcher? To accept the high standing of Angel Pagan, you have to learn to love field-work that doesn't tabulate neatly on the ledger. If you think this sort of respect for the glove is obvious, consider the choice that Omar Minaya and Jerry Manuel made to start Gary Matthews Jr. over Angel Pagan in 2010.

Advanced fielding metrics measure where batted balls fly and who gets to them what percent of the time -- also, how quickly and accurately the ball is returned to the diamond. In 2009, by the UZR measure, Angel Pagan was about a league-average center fielder. Gary Matthews Jr., though, was spectacularly bad, theoretically costing his team 15.2 runs through shoddy play. When Matthews's catastrophic bat forced him from the Mets lineup (.507 OPS), Pagan's athleticism finally broke through in the metrics. UZR pegged him as a +9 center fielder. With a positional adjustment, James K. had him squarely in gold glove territory as maybe the 4th best outfielder in the NL.

That in itself is money in the bank, but when a fielder so blessed can hit, you have a star. In 2010, Pagan took his 2009 breakout and stretched it across 151 games, each ensuing at bat proving Pagan, 28, to be a different player than the serviceable kid seen in the minors. He put meat on the bones of a .290 average with 31 doubles, 11 homers, and seven triples -- also 44 walks. His .341 wOBA, combined with his defensive work, didn't just make Angel the best player on the 2010 Mets. But, by fWAR, the 22nd best position player in baseball. 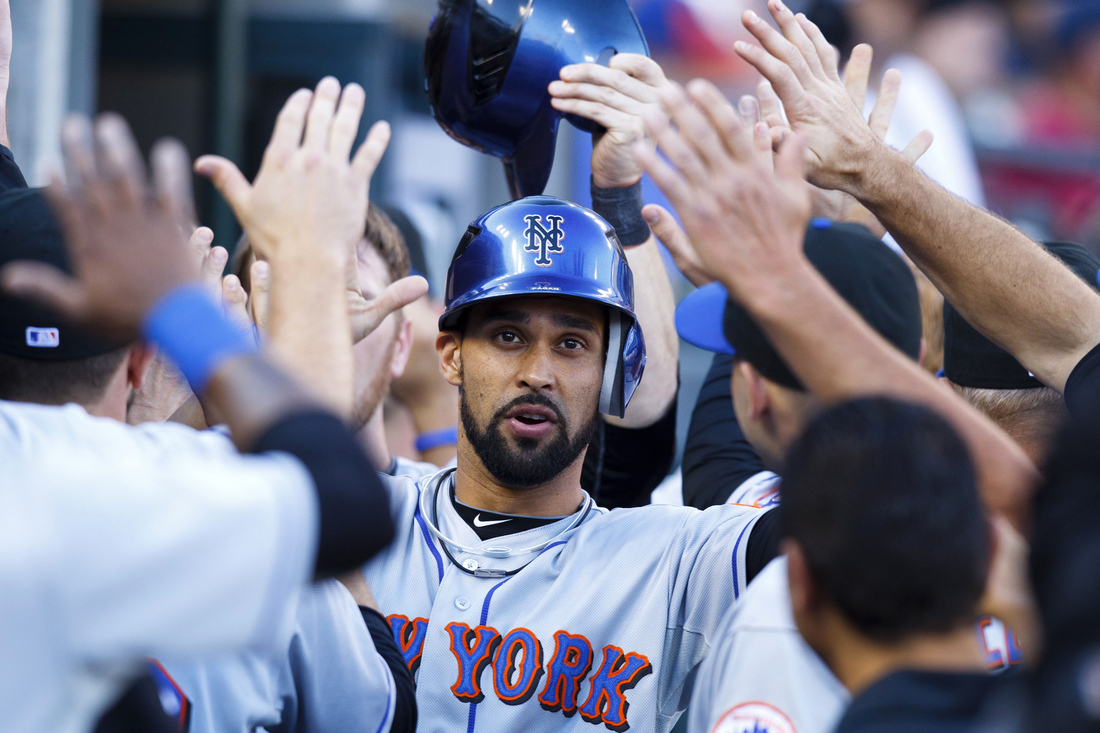 Well, yeah, but he has terrible instincts! Pagan has made his share of highly visible, sometimes risible errors in the field and on the bases. How to debit him for those blunders is up to the fan. I would submit, though, that a sturdy building doesn't sink under nicked hardware. There are bad plays, there are spectacular ones, and there is the substratum of quick legs and good reads that put Pagan's baserunning in 2010, for a shining example, as 12th best in the major leagues by Fangraphs' measure. Bill James Online had him fourth best at a point this year. Watch these "bad instincts" starting at the one minute mark.

Pagan didn't only win a (no-brainer) starting job in 2011, he won center field out from under Beltran, a fellow Puerto Rican whom Pagan first met as a wide-eyed high school prospect. Beltran, coming off serious injury, acquiesced as gracefully as he runs down flies. It's "a great problem to have," Pagan said. "We have two center fielders playing right next to each other."

Curiously though, Pagan had what can only be called a bad defensive year. The eyes picked it up -- particularly on throws -- and the metrics nodded in accord. At minus 16.1 UZR, Pagan in 2011 was as bad as he was good in 2010. The first way to approach this oddity is by assailing defensive metrics, which retain some rough edges and which require more than a year's data to reach a threshold of reliability.On the other hand, it seems probable that "defensive slumps" are more common and more detrimental than baseball fans like to believe. World class fielding isn't only physically demanding; it's hard to do -- a symphony of motions at blitzing speed ruined by an offbeat step, a poor read, an arcing route, suboptimal footwork, a bad throw. In short, kind of like batting, we should expect variability year to year.

2011 was a downer all over. After a season and a half playing like an All Star, Angel's bat slid back to about exactly league average, with less and smaller contact producing a .694 OPS. That will play fine for a wizard in center field -- did the Mets expect more from Torres? -- but on both sides of the ball, Angel had played himself into expendability, where a weak-hitting center fielder and a bullpen arm looked like a strong return.

What happened? Daily News writer Andy Martino found Pagan sullen and morose, his sudden quiet coinciding with bouts of dehydration and fatigue. (Ring bells?) Martino also hints that higher ups were growing tired of Pagan's clubhouse act (of being quiet). But who knows? When the going was good, the Mets nominated Pagan for a Clemente award and gave him the pick of the finest shaving cream pies in Queens. In San Francisco he's a grinning fool again. So really, who knows. We know Pagan's 2012 is a near carbon copy of his 2010 offensively, and that he's been 3.6 wins better than Andres Torres and Ramon Ramirez combined.

But then, we wouldn't have traded that Angel Pagan. We traded the guy who somehow just wasn't a star, just wasn't the future of center field, and promised to slip back to being the fourth outfielder the Mets had long taken him for.

Most underrated in baseball? I don't know. But Angel Pagan might just be the most underrated starting fourth outfielder I've ever seen.