We're back with this season's penultimate edition of TWISNY. Check out part one from yesterday if you missed it.

A loud hot dog vendor patrolling in the area of the SNY booth has been terrorizing Gary, Keith, and Ron lately. Here's a shot of GKR's nemesis using nature's megaphone: 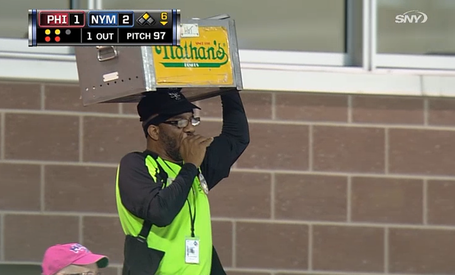 Gary couldn't take it anymore, exclaiming "Will somebody buy a hot dog!" We prefer the hot dog man's calls to the persistent hacking cough that has plagued SNY broadcasts for the last several weeks. Some SNY employee desperately needs a visit to the doctor's office or, at the least, some cough drops.

Let's check in with Kevin! Kevin interviewed Matt Harvey after the star rookie's final start of the season: 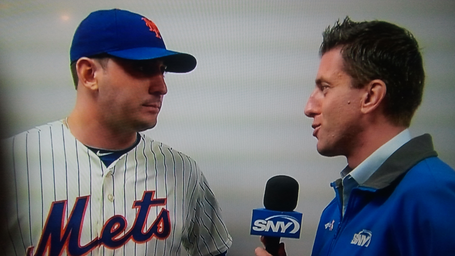 We can't quite put our finger on the reason why, but it was a more intimate exchange than usual. Kevin seemed really happy to be there. Here is a full transcript:

Kevin Burkhardt: Matt, after you got Ruiz, you knew it was the last pitch of this year. You had a nice slow walk. Did you take it in? What were you thinking on the way to the dugout?

Matt Harvey: I didn't know what to say or feel, it was pretty exciting. I got chills as I was walking off. I knew I was done. Obviously I wanted to keep going but it's not my call. I was happy to keep the team within winning distance.

KB: How does your body feel right now?

KB: I'm sure you understand what the organization is doing, but did you have any say, as far as still pitching, or did they say this is it for you?

MH: It was them. Obviously if they asked me I probably would've fought them until my face turn blue. It's not my decision. Whatever they decide I'm fine with. I'll just get ready for next year.

KB: What did you learn about yourself in these ten starts?

MH: Keep battling, learning. Pick up on each hitter. Pay attention to their tendencies. They do a great job here going over hitters before games. Shoppach was awesome tonight and has been for all the games he's caught me. It seems like almost every one. It's just been a lot of fun.

KB: When you have a night like tonight, you allow just the one hit to open the game. Did you feel real good in the bullpen? If so, after you allow that one hit, the home run, is it hard to keep telling yourself you feel good and to get back on track?

MH: Nobody likes to go 1-0 on the first hitter. I knew it was going to be a long game. I wanted to be out there as long as possible. Just had to pound the zone. I knew a good defense was right behind me making every play. I was fortunate enough to do that.

KB: Matt when you came up you had that electric debut in Arizona. There was talk where Dan and Terry said, hey we want Matt to use the changeup, to use the secondary stuff. Do you feel like through ten starts you've found a balance between your fastball, changeup, curveball, and slider?

MH: Yeah, absolutely. Tonight it was fastball-changeup mostly. I was able to mix them in and throw strikes. I was getting those good ground balls over to Murph and Ike. They made every play. Other than that, I tried to throw as many strikes as I could, and they made all the plays.

KB: What will your offseason regimen be now? Is there a certain period of rest before you get back on the horse and start to work out?

MH: I don't want to but I'm sure they're going to force that a little bit. We'll see. I like to keep my body in shape every day and do whatever I can.

MH: There's still a lot of work to do. A lot of the starts were five, six innings. For me that's unacceptable. Seven or eight innings is what I'm going to work for. Going into the offseason I'll be doing everything I can to pound the zone, get early outs like I said, and stay longer in the game.

KB: Matt congratulations on the effort all this year. Hopefully the Mets can finish this off and get you a win in your final start.

MH: We'll be all right. We've got a good defense. [as Daniel Murphy airmails a throw to first base over Ike Davis' head]. 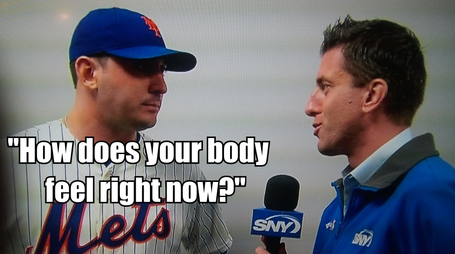 We now begin the chair portion of this week's edition. Phil Niekro joined the booth to talk knuckleballs, forcing Ron Darling into a TWISNY favorite, the high chair: 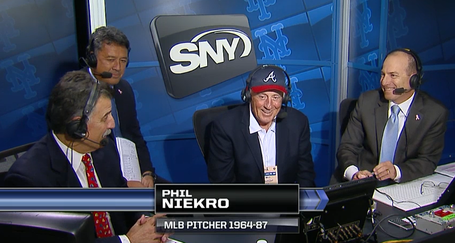 Kevin refuses to sit in the chair assigned to the "field reporter" because he prefers the job title "sideline sleuth": 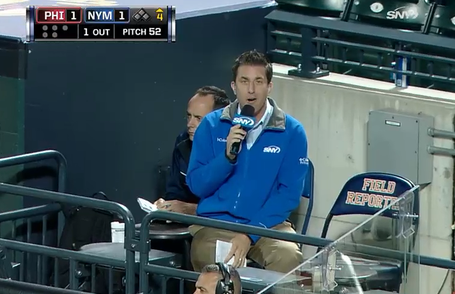 Gary Cohen: "Do me a favor Kevin. That empty chair next to you? Don't have a conversation with it."

Kevin Burkhardt: "Give it time."

Discussion of chairs continued the next day. Ron Darling explained why his chair in the booth is just a bit lower than Gary's and Keith's:

Gary Cohen: Here in the booth we don't have designations on chairs.

Ron Darling: We always know which chair is mine though.

GC: Right, because you sit in a low chair. I don't know why that is. We don't have designations. Unlike Kevin's chair which is inscribed with "field reporter"

RD: There is a reason I sit on the low chair. When we're in the three-man booth, with you two flanking me on either side, I find that it's easier for us to have a conversation, instead of me blocking one or the other. And ya know Keith likes to be the tallest. He has that kind of personality.

Makes sense. Shortly after this exchange, Kevin relayed to the booth that Jimmy the ballboy was being booed "mercifully" after booting a foul ball grounder. Perhaps Jimmy will fade into Bolivian after this season.

We're not caught up on the latest eyewear trends but we nonetheless think that Dan Warthen's glasses just aren't working for him: 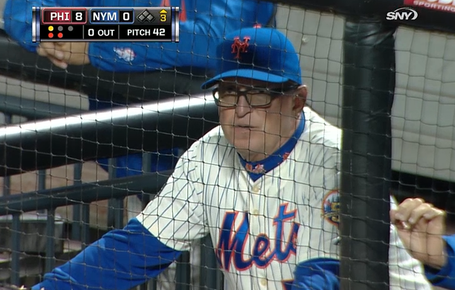 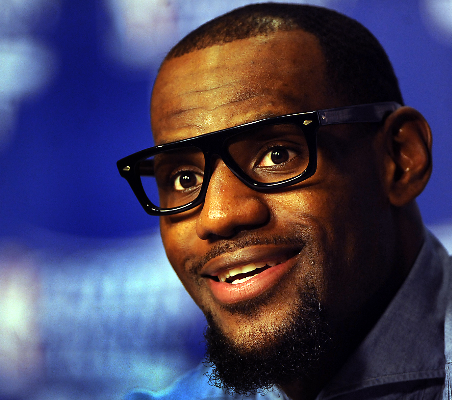 We think the Costanza is more appropriate: 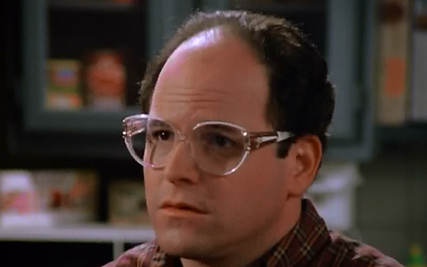 That's all for now. We'll be back with one final edition after season's end. Send any tips or suggestions to ThisWeekInSNY@gmail.com. You will be credited if we run the material. Have a well-dressed weekend! 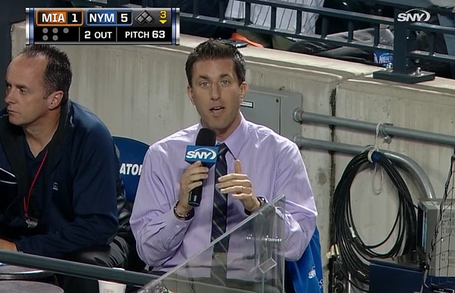