There's no guarantee that Andres Torres would have scored the game-tying run in the ninth inning after leading off with a double, but it certainly would have been nice to find out. Having trailed four-to-nothing early in the game with Collin McHugh's not-so-great second big league start, the Mets found themselves down by just one run in the ninth.

Torres drilled the ball into right field and made an aggressive but smart decision to push the envelope and head to second base. He slid into the bag safely, and it looked like the Mets suddenly had a great opportunity to tie the game. But the Cardinals — apparently prompted by Carlos Beltran — decided to appeal to first base because Andres Torres may have missed the bag as he turned towards second base. First base umpire David Rackley agreed with the Cardinals' argument and emphatically called Torres out.

The slow-motion replays of Torres's turn at first were, at worst, inconclusive. Via the comments at Viva El Birdos, here's what it looked like:

Of the two freeze frames, the second one is more convincing to me. Either way, there's no way either shot conclusively supports Rackley's call at first.

Bad calls, of course, go both ways over the course of 162 games of baseball. The Mets have been the beneficiaries of poor umpiring, too, but it's never a good thing to see an umpire blow a call at such a crucial moment of a game. Torres could have easily been stranded at either second or third base if he hadn't been called out on the play, but the Cardinals' successful appeal effectively put an end to the game.

Before the play, however, the Mets had looked out of it for a little while. Collin McHugh, who was awfully impressive against the Rockies, gave up four runs in four innings against the much healthier Cardinals. He's only two starts into his big league career, and today's start was far from a disaster.

After Terry Collins hit for McHugh in the bottom of the fourth, Manny Acosta came in and threw a couple of scoreless innings. He has quietly — very, very quietly — lowered his astronomical ERA to 7.58. If he can manage to finish the year with an ERA around 6.00, he will have had a very good second half in the big leagues.

The Mets finally got on the board in the seventh inning on a two-run bomb by Kelly Shoppach. Since joining the Mets, Shoppach has shown power against both left-handed and right-handed pitchers. He's getting starts against right-handed pitchers over Josh Thole, too, but over the course of his career, Shoppach's been like Buster Posey when he faces lefties and like Rod Barajas when he faces righties. That's okay, and let's hope he's still on the Mets in 2013.

Robert Carson started the seventh inning and plunked Jon Jay before striking out Matt Carpenter and giving way to Bobby Parnell, who promptly gave up a pair of singles, the latter of which plated the Cardinals' fifth run of the game. Parnell got a double play to escape further trouble, but he definitely didn't help the cause.

Daniel Murphy hit a two-run home run in the eighth inning, and the Mets were once again behind by one run. David Wright and pinch hitter Jason Bay each got on base following the home run, but Scott Hairston lined out softly to short before Shoppach struck out to end the inning.

Unfortunately, the aforementioned blown call in the ninth inning further reduced the Mets' odds of tying or winning the game, and they did not defy the odds as they went down fairly quietly after Torres was called out.

On the bright side, Matt Harvey gets the start tomorrow night in St. Louis. 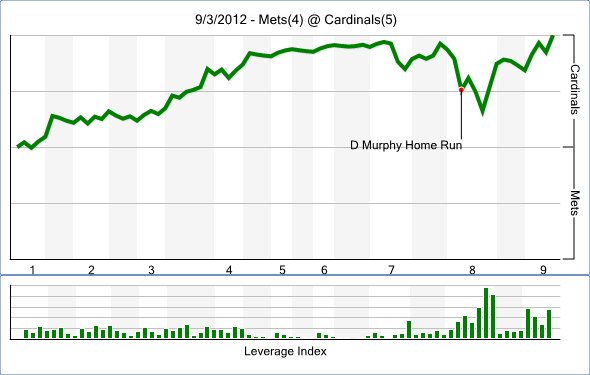