Share All sharing options for: #BlameBeltran: Explaining A Hashtag

The ironic hashtag #BlameBeltran was conceived by myself and @willDavidian in the summer of 2010 to mock those who continued to hate on and unfairly blame Carlos Beltran for the Mets' problems. Here is an infamous example of such a hater: 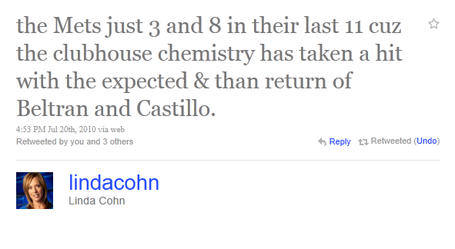 Of course Beltran was one of the best Mets ever, as well as a favorite among the originators of the meme. The hashtag was heavily promoted by SNY's Ted Berg and was mildly popular within the Mets' Twittersphere. Dozens, maybe hundreds, of Mets fans joined in the fun of blaming Beltran for everything from the Oliver Perez contract to Jason Bay's struggles. So imagine my surprise when I read Daily News Mets beat writer Andy Martino's alternative interpretation of the meme in his game story about the Mets' loss to the Cardinals yesterday, during which Beltran told Cards manager Mike Matheny that Andres Torres missed first base while legging out his would-be ninth-inning double:

Remember that unfair Twitter hashtag from a few years back, #BlameBeltran, that tried to scapegoat him for the team's second-half fizzle? We have finally found the right situation for it. The Mets can blame Beltran for this loss, and he wasn't even playing.

Given the original intention and continued usage of the hashtag, I'd say it's incorrect to note that it "tried to scapegoat" Beltran for anything. Martino follows just 113 Twitter accounts, few of which are owned by Mets fans. It was possible he simply misunderstood the hashtag, given that not many in his Twitter feed likely used it. So I emailed him, explaining the meaning of the meme and why I found his reference to it misguided. He was kind enough to respond:

This is how I see it: While you and others approached #BlameBeltran with a sense of irony, many fans who I've interacted with have a genuinely warped view of him, and did in fact blame him for 2010, among other things.

You created the hashtag, but that doesn't mean you could control the way it was perceived by everyone. To be fair, though, I suppose I could have noted that #BlameBeltran was conceived in irony.

In any case, the tension between Beltran himself and elements of the fan base is a fascinating and many-layered dynamic, and that's why I wrote about it yesterday. I don't know, but I obviously take your word that you approached it with tongue-in-cheek, though not everyone did.

Much of what Martino says here is true. Many Mets fans do have a warped view of Beltran. Many blamed him for the team's failures during the Omar Minaya Era. However, #BlameBeltran was indeed conceived in irony. Seldom was the occasion when it was used sincerely. It certainly happened but it was rare; the meme was definitely not co-opted by genuine Beltran haters. And the haters should be separated from the Beltran-loving #BlameBeltran crowd.

Perhaps this discussion is trivial. I'm now 500+ words into a post about a Twitter hashtag involving a player who has not been on the Mets' roster in over a year. Nevertheless, I consider it a worthwhile episode in the campaign to promote reason over a preferred narrative.