This Week in Baseball Season One Recaps: Episode 2

In episode two of This Week in Baseball, Dennis Eckerskey is chased by a ghost (literally), the Mets kill Davey Johnson, and Mel Allen goes nuts for Fred Lynn.

Share All sharing options for: This Week in Baseball Season One Recaps: Episode 2

Episode two of This Week in Baseball covers the week ending June 7, 1977. Yes, that was a Tuesday. No, I don't know why a Tuesday is the cut-off for this week in baseball. If you must know, go ask Bowie Kuhn.

To give you some historical context, June 7 was the same date on which the 1977 MLB amateur draft was held. The White Sox had the first overall pick and opted for Harold Baines. Other notable first rounders include Paul Molitor for Milwaukee and Dave Henderson for Seattle. With their first round pick, the Mets chose Wally Backman. They saved their second round pick for Mookie Wilson.

You may recall the inaugural episode of TWIB ended with footage from Dennis Eckersley's no hitter at Cleveland's Municipal Stadium. Curiously shot footage, but footage nonetheless. We pick up where we left off in episode two, as Eck pursues the record for consecutive hitless innings--25 1/3, set by Cy Young in 1904--in a game against the expansion Seattle Mariners. Following a gratuitous shot of a ball girl (Jamie, according to her digit-free jersey), we see Eckersley pondering his potential place in the game's history while haunted by the ghost of Young. Literally, it seems, as TWIB posts an eerie specter of the legendary pitcher's form next to Eck as he stalks the mound. 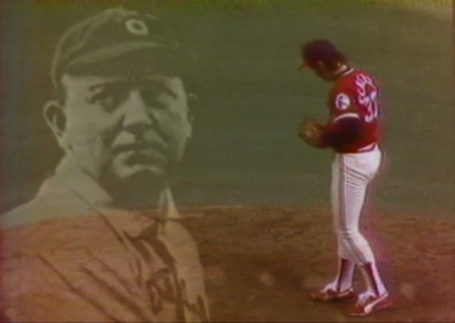 As Eckersely draws closer and closer to Young's mark, narrator Mel Allen becomes increasingly tense, an out of character move for such a normally cheery guy. Drama's not really Mel's forte, but he draws out his words for maximum tension, telling us that Eckersley is "working carefully. Eagerly. Anxiously." Nervously, even!

Eck's pursuit falls short in the bottom of the 7th, as Ruppert Jones tags him for a home run. Still, throwing up so many consecutive innings is no small feat, especially when one is being pursued by spirits from the hoary nether-regions. Allen assures us "for young Dennis Eckersley, he still has time to make history."

From Seattle, we travel to the Land of a Thousand Lakes, where the Twins are the surprise leader in the AL West, and Rod Carew is the unsurprising league leader in batting. Allen refers to him as "baseball's perfect master with the bat," and the footage of him hitting in this episode is a great reminder of just how good he was. He takes several terrible pitches and turns them into doubles and triples, with a skill baseball wouldn't see again until Vladimir Guerrero came along.

The Twins take the first of a three-game set against the Red Sox behind the pitching of Dave Goltz, who goes the distance. The Sox rebound in game two with a complete game of their own from Bill "Spaceman" Lee, his shoulder seemingly healed from an injury that plagued him earlier in the year. Lee gets some help from an amazing catch by Fred Lynn, who leaps at the center field fence to rob a homer from Dan Ford. 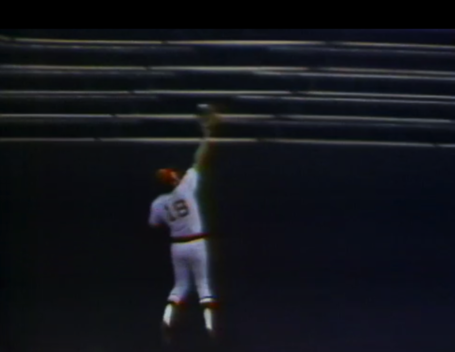 A shot of an impressed Bill Lee is accompanied by this narration from Allen: "Alright man, I'm a believer." No, I'm not sure what belief Allen is referring to, either. Incredibly, Lynn's circus catch receives a standing O from the Twins' faithful. Even more incredibly, Lynn is nursing a bum ankle when he makes it. This proves no impediment to his acrobatics, or to knocking two big hits that lead to a Sox win. We shall hear more (much more) about Lynn's catch later.

Next, we take a trip to Chicago, where the White Sox are enjoying a season every bit as surprising as the Twins', if not more. After finishing last in 1976, they trail Minnesota by just two games at week's end, despite dropping two out of three to the Yankees at home. We see this in a segment TWIB scores with Al Capone-era jazz. Twenty-three skidoo!

The Comiskey crowd is treated to a monster home run from slugger Richie Zisk, who belts one onto the roof in left field. Fans in the outfield seats hoist banners with targets on them and slogans like PITCH AT RISK TO RICH ZISK. It'c unclear if they love Zisk's moonshots or just love homers period, as the TWIB cameras capture one shirtless maroon catching a longball from Yankee rookie George Zeber. He jumps up and down like a maniac, oblivious to the fact the homer was hit by the enemy, and to the dejection of left fielder Ralph Garr right in front of him. 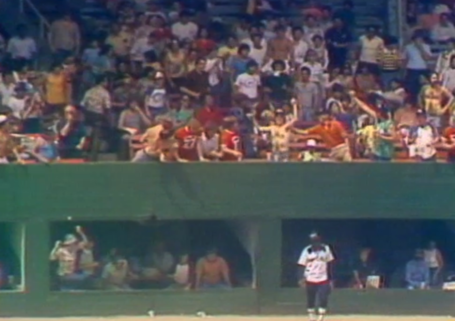 Another curious thing I noticed in this segment (other than Chicago's awful white polo shirt unis with navy blue collars): During a Yankee home run fest in the series finale, there is a shot of relievers rushing from the dugout to the White Sox bullpen. While the relievers get warmed up, the distance markers on the outfield fence loom in the distance. As you'll see below, these distances are posted in both feet and meters. I don't recall ever seeing this anywhere but Montreal or Toronto. Was this a concession to the brand new Blue Jays? An anticipation of the often threatened but never executed switch to the metric system that flared up in the 1970s? Bill Veeck's most quixotic promotion? Any insight from readers is appreciated. 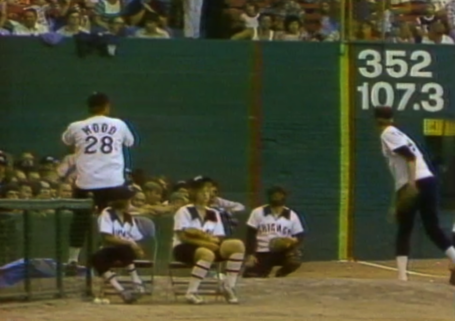 Finally, we head to Pittsburgh, where the Pirates and Cubs are locked in a battle for first place for the second week in a row, this time at rainy and disturbingly trash-filled Three Rivers Stadium. Allen credits the Pirates' speed for their fine record thus far, as exemplified by league leader in steals, Frank Tavares. This contention is unfortunately accompanied by footage of Tavares stealing third and clearly being tagged out before he gets to the bag.

Pittsburgh takes two out of three from Chicago in their series, ending the week 2.5 games out of first. One of their games is saved by a very young, very hard throwing, and very mustache-free Goose Gossage. But the true highlight of this series, as far as I'm concerned, is this dope jacket sported by Pirates manager Chuck Tanner. I know I mocked the Pirates' unis in episode one, but I'd wear the hell out of this. 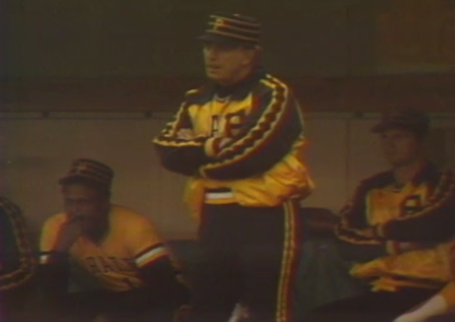 In the preamble to my episode one recap, I noted we were unlikely to see much Mets coverage in this series, since the team was dreadful in 1977. Episode two immediately proved me a liar, as it contains an extended segment on the Mets, precisely because they are so bad. (This is demonstrated by a shot of Buddy Harrelson reacting slowly and sadly to a called strike three.) TWIB treats us to the press conference where the Mets decide they must remove Joe Frazier as their manager and install in his place Joe Torre, who was playing for the team at the time and will continue in a limited playing role even while managing. "I was wondering how the mets were gonna get me to retire and I think they found a way." Joe quips.

Allen notes cheerfully that after the hire of Torre, "suddenly the Mets were hitting." Granted, they begin by doing this in Montreal against an Expos team only slightly less terrible than themselves. And based on the footage shown here, most of that "hitting" consists of steals and squeeze plays. I've noticed in my viewing of this series is that "scrappy" baseball is prized by TWIB, I think in no small part because guys sliding headfirst into things looks rad on TV.

After Montreal, the Mets come home and take three of four from the slugging Phillies. Although in this series, the Mets do most of the slugging. We see Dave Kingman, of all people, try to take an extra base in the bottom of the tenth on a bad throw from the outfield. He goes in high and hard and knocks the Phils' second baseman for a loop, a guy by the name of Davey Johnson. "Not a polite play, it broke Johnson's nose, but it shows the Mets' agressiveness!" Allen chirps about a play that would probably get you suspended and fined nowadays. 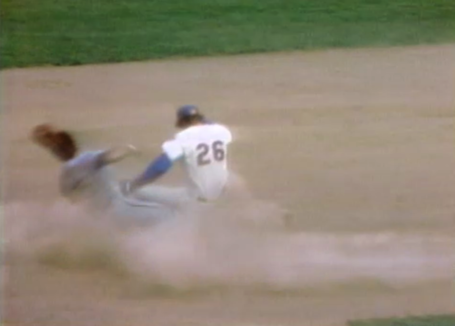 Following this play (Johnson stayed in the game, amazingly), Joe Torre shows his managing acumen by pinch hitting for Bruce Boisclair with...himself. The Shea crowd gives him an appreciative ovation, but he Phils walk him intentionally, denying him his first at bat as player-manager. The winning run scores shortly thereafter anyway, when Phils reliever Tom Underwood uncorks a wild pitch to bring home John Milner. "Sometimes, it seems, the players can't do it without the manager," Allen opines.

The show concludes with a few odd and amazing plays from the previous week. We see Pete Rose pursue a foul ball, his chase so single-minded he opts to hurdle the dugout fence at Riverfront Stadium in one bound. An astoundingly acrobatic play, and completely pointless, since any ball you catch in a dugout won't count. More like Charlie DUH-stle, amirite? 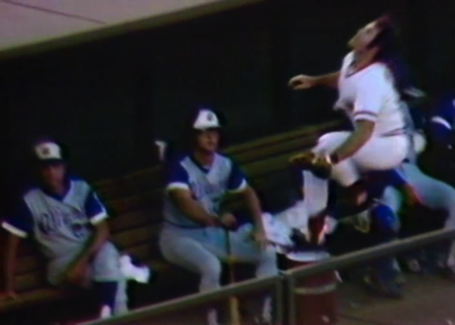 We then see an odd confrontation between Dodgers catcher Steve Yeager and Astros runner Tom Ferguson. Yeager catches Ferguson napping off of second, but rather than heave a throw to the infield, the catcher runs out toward the runner, and doesn't stop until he's about three feet away from him. Amazingly, Ferguson does not move. It's like a game of chicken. Ferguson blinks first and is tagged while trying to run to third.

We are then treated to the sight of future Hall of Famer Willie Stargell attempting to field a pickoff throw, only to have the webbing of his glove give way and the ball hit him in the face. Why you gotta treat Pops like that, ball? 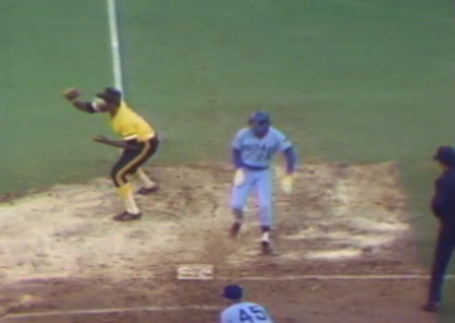 Two amazing plays round out the collection. First, Dwayne Kuiper of the Indians makes a spectacular diving catch on a line drive, losing his cap as he tumbles on the turf. "That's a Kuiper keeper!" Allen says. Then, Lee Mazzilli running down a long fly ball in centerfield, then bouncing high off of Olympic Stadium's centerfield fence. It is a typically flashy move for the matinee idol Mazzilli of this era.

However, the play of the week goes to Fred Lynn's aforementioned catch in Minnesota. Allen is so enamored of this leaping grab, he shows it twice. The second time around, he accentuates the footage with yells of GO MAN, GO! that are a bit much, even for him. His enthusiasm breaks his normal, cheery bounds and touches the face of Near Insanity. Were it legal at the time, I think Mel Allen would have married this catch.

Before he leaves us, Mel reminds us this is an MLB production after all by urging us to go check out a baseball game in person. "Baseball has never been livelier, and the summer fun has only begun!"

Coming up in episode three: The Phillies and Royals finally start to surge, Don Sutton cheats, and nobody can run at Wrigley Field. Stay tuned!