Who Could Lucas Duda Become?

Lucas Duda now faces an important season in his career. Looking back at players with similar skill sets, perhaps we can learn what his chances for success are.

Share All sharing options for: Who Could Lucas Duda Become?

Lucas Duda looks like he'll be the starting left fielder this year. After all the promise of 2011, the pain of 2012 might make that seem like a less-than-adequate solution for some. Certainly it seems like his terrible outfield defense will always sap his value -- despite being 13% better than league average with the stick, the Dude has been below replacement so far overall. But if we focus on the stick, there must be hope.

If we define the Oxen stick as generally as we can -- he's a corner outfielder without any speed and with a double-digit walk rate, a decent strikeout rate (16-24%) and above average power (.160-.200 ISO) that has put up over 800 plate appearances before he turned 27 -- then we can easily find a list of similar players since 1990. Good thing I did that to suss out Duda's fantasy chances just today. Let me steal a table from myself:

Kubel hit more home runs, walked less, and struck out less than Duda in his first few years, but he was also worth less with the stick overall. And he hit a home run in 3.3% of his plate appearances to Duda's 3.2%, so the home run difference is overstated. Neither has any speed, and neither is any good in the field. It's one of those comps that feels right.

So what happened for Jason Kubel and can that happen for Lucas Duda?

Instead, the power seemed to come from work on his batted ball mix. Watch Kubel's ground ball to fly ball ratio as he aged: 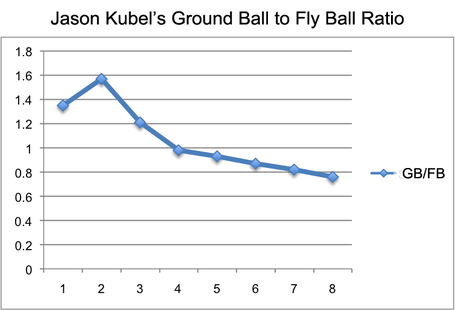 It might just have been as simple as hitting more fly balls. Because if you focus solely on the fly balls and home runs he did hit, Kubel's batted ball distance has been fairly steady: 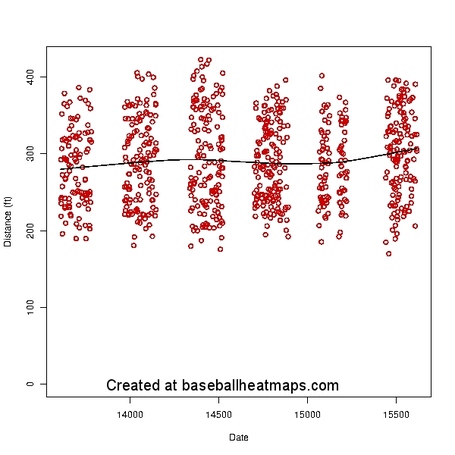 Well, at least it was steady until last year. And Mets fans might take Kubel's years leading up to last year -- he put up 3.8 WAR and a 104 home runs at the cost of $14.4 million for the the team that developed him. Yes, the defense tanked his overall usefulness, but we've already established that Duda's plate discipline is at least potentially more valuable, as long as it comes with Kubellian power.

Duda hasn't found his power footing completely. Look at the average distance of his home runs and fly balls, and you can see that he doesn't quite have an identity yet: 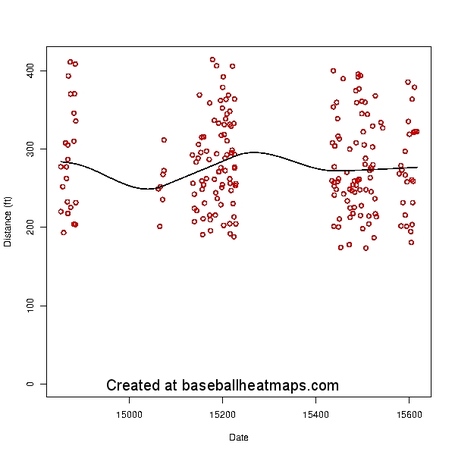 His batted ball distance is hovering around 280 feet right now, but he's shown better in the past. Jason Kubel hit his flies and home runs 282 feet way back in 2007, though, so the comp holds. Perhaps all that Duda needs is volume -- more reps, slightly more distance on his batted balls, and more fly balls -- before he can begin to add value to the Mets' team overall.

Jason Kubel is not the sexiest name. He's only been above-average by wins above replacement once in his career. He's averaged one WAR per 600 plate appearances over his career. His defense and base running have sapped most of his value.

But Jason Kubel has been above replacement every full season but one, and right now Lucas Duda is staring up at that benchmark from the wrong side. So Jason Kubel would be fine, at least until the team can afford to spend on a free agent replacement.