Share All sharing options for: The Five Longest Mets Home Runs of 2012

Nothing too complicated here.

I was bored the other day and began trolling through MLBtv archives. As is so often the case I was drawn in like a moth to the longballs. Not long after I began wondering about the longest shots hits by Mets. A couple of clicks over to the wildly entertaining and useful HitTrackerOnline and voila, the five longest Mets home runs of 2012:

#5. Ike Davis against the Diamondbacks on Saturday, July 28th

You may remember this as the day when Ike hit three home runs, becoming the seventh Met in history to do so. This particular shot was the first of the three, off an 89 MPH Ian Kennedy heater; Ike sent it back at over 106 MPH. Unfortunately, Davis' big night wouldn't mean much as the Mets beat the overwhelming historical odds and somehow still ended up losing the game by the score of 6-3. For the record, most of the home runs on this list would have cleared the fences in all 30 major league ballparks -- however, this one would not. This particular shot was only good enough for 27.

#4. Jason Bay against the Phillies on Friday, April 13th

Surprised to see Bay here? Don't be. Despite hitting just eight longballs in 2012, Bay's 408' average home run distance was the longest on the club. This was the first of those eight for the 34-year old Vancouverite. It came off a 91 MPH fastball from Cliff Lee which Keith might have said was 'grooved' (click image to embiggen): 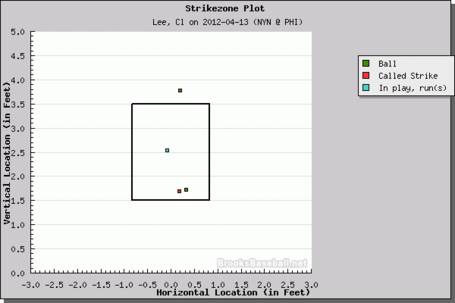 Unlike Ike's shot before it, Bay's two-run bomb cemented a victory on a day when three runs was all eventual Cy Young R.A. Dickey would need. It also gave some topspin to the thirteen-game losing streak Lee would experience. It should also be noted that Bay's homer was the only opposite field shot on this list.

#3. David Wright against the Yankees on Saturday, June 9th

After starting the at-bat by busting Wright in with two fastballs, Hughes mistakenly followed with this 84 MPH hanging change-up. Wright's eighth homer of the year put the Mets up 2-1 in the sixth inning of this Subway Series affair. Unfortunately, that would cap their offense for the day, while the Yankees would manage a few more for the win.

#2. Ike Davis against the Braves on Saturday, July 14th

This was a pretty standard Ike blast where he turned on one and pulled it -- by my count -- nine rows deep over the right-center field wall (nice catch by powder blue). Hanson hung a particularly flat 79 MPH slider way up in the zone on the very first pitch of the at bat (click image to embiggen):

This homer also helped the Mets fight back in a game where the lead would change on five separate occasions; however, the Mets ended up losing 8-7. It's also worth noting that this home run had the highest speed off the bat (112.2 MPH) with by far the lowest apex of trajectory of any home run on this list at 77', a modest height for Davis who regularly topped 110' in 2012.

For the record, the lowest apex of 2012 was a Scott Hairston missile off of Cole Hamels that went just 48' off the ground, just barely getting over the left field wall at Citi Field. The highest apex of the year was an Ike Davis shot -- interestingly, also off of Cole Hamels -- that climbed up 135' off the ground. Meanwhile the fastest speed off the bat came from Lucas Duda (113.7 MPH) off another Phillies pitcher, Vance Worley; that shot would rank 11th on the total distance list.

#1. Ike Davis against the Diamondbacks on Saturday, July 28th

So apparently Ike was feeling really good on this day, not only hitting three home runs but also hitting two of the top five longest shots of the season. In total, his three homers traveled a distance of 1,274'; that's about a quarter of a mile. Kennedy was more cautious with Davis this second time around; in his first at bat four of five pitches were fastballs, the last of which Davis sent out. The second time Kennedy started him with four offspeed offerings in his first five pitches. Yet, the at bat became a battle and on the 11th pitch it was a 92 MPH fastball that Ike ultimately bounced high off that huge wall in center.

Regardless, as I pointed out earlier, Kennedy would ultimately win the war. Ian Kennedy was one of seven pitchers in 2012 to allow three homers to a single opponent; yet Kennedy is the only one to still win the game. The other six pitchers combined for a 10.87 ERA and an 0-5 record. But hey, in the words of Kennedy himself, "[Davis] made SportsCenter, so there."

So if we've learned anything from this exercise it's this: If the Mets are on a road trip, it's a Saturday, a righthander is on the mound, and especially if Ike Davis comes to the plate -- follow the bouncing ball, there's a decent shot he's about to hit it a long way.