Seven Mets Prospects (Beyond Wheeler and d'Arnaud) To Watch In 2013

For what it's worth, the 2013 Mets should afford plenty of opportunities to the next crop of youngsters.

Share All sharing options for: Seven Mets Prospects (Beyond Wheeler and d'Arnaud) To Watch In 2013

The 2013 iteration of the New York Mets roster is clearly not shaping up to be Sandy Alderson's magnum opus. The general manager himself has, in no uncertain terms, indicated as much recently.

One of the silver linings of watching a ball club with a flawed roster — at least for us prospect watchers — is that it often affords plenty of leeway for young players. In the absence of established regulars and the expectations of serious contention, opportunity abounds for names that we know only from Binghamton or St. Lucie. The Mets gave 799 plate appearances and 247 innings pitched to rookies last season, and they figure to do the same this year.

They're not all destined for greatness, nor does anyone expect the majority of them to be. We know they can't all be Wheelers and d'Arnauds. However, the newness alone makes each one notable. And the fact that you never know is what makes each one truly interesting. That's why we pay attention to guys like Marco Scutaro, Jeff Keppinger, and Benny Agbayani.

As stated, we've already heard plenty about Zack Wheeler and Travis d'Arnaud and their potential 2013 impact. So we're going to overlook them for this exercise and focus on seven more current minor leaguers who could have an impact on the 2013 Mets:

After tearing apart the competition at Double-A Binghamton in 2012 (.960 OPS), more advanced pitchers took advantage of the 25-year-old's overly aggressive approach at the plate in Triple-A (.629 OPS). He'll try to polish some of that swing-and-miss out of his game early in 2013 (28.5% strikeout rate) to justify an everyday role; if all else fails he already features the best outfield glove in the organization. With the Mets' outfield situation in shambles — not just offensively, but defensively as well — expect to see a good amount of den Dekker whether he irons out the kinks in his offensive profile or not. 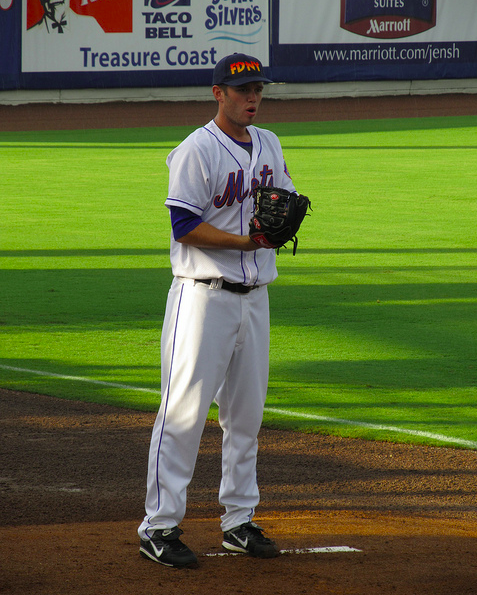 After a breakout 2011 in the High-A St. Lucie rotation (2.08 ERA), the 25-year-old struggled against more age-appropriate competition at Double-A in 2012 (4.00 ERA). He doesn't feature an overpowering fastball or much of a jaw-dropping repertoire, but his changeup is more often than not a plus offering. He'll have to take a big step forward to reach his ceiling as a back-end starter, but all signs point to a spring training audition for the team's second LOOGY role. And with a markedly better resume against lefties since 2011 (.193 opponent average), he's got a fair shot against the crop of journeymen the club will be looking at this March. 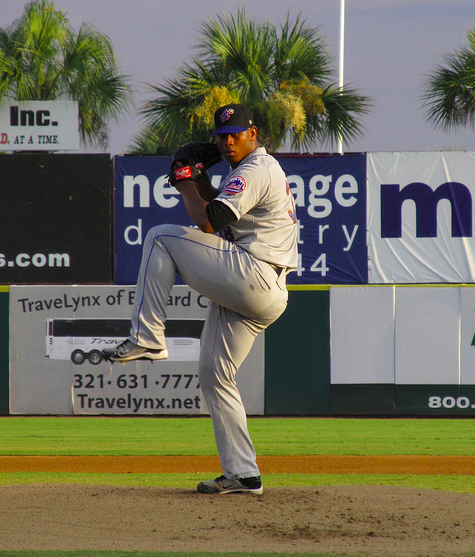 In his first season of relief, the 24-year-old had good success posting career-highs in strikeouts per nine (9.54) as well as walks per nine (2.60) as a member of the Double-A B-Mets bullpen. Remember a couple years ago when Omar Minaya compared his arm to that of Jenrry Mejia? Well, obviously that wasn't entirely accurate, as was made clear by the fact that he went unclaimed in the most recent Rule 5 Draft. At the very least, though, Rodriguez offers good command of a very strong fastball — and not much else — which, thanks to a spotty relief crew, should be enough to give him a real shot as middle relief fodder at some point in 2013.

Mazzoni is an interesting name for 2013 after a rather underwhelming 2012 debut for the '11 second rounder. A strikeout per nine mark around 6.5 between High-A and Double-A is a big red flag. Additionally, he seemed to have problems putting away Double-A hitters (.281 opponent average, 1.00 home run per nine), an unexpected turn for a guy known for a nice mix of polish as well as mid-90s heat. For that reason, scouts think his stuff would play up in shorter bursts. And should the Mets make that transition, expect Mazzoni's mix of command, velocity, and decent secondary stuff to move very quickly.

The 26-year-old showed, once again, that he can hit. In fact, 2012 was the third straight season in which he posted an OPS at or near .900 at Triple-A Buffalo, showcasing what's become a familiar mix of power, patience, and raw hitting ability. The problem, as always, is that no matter how much he hits, he's blocked by David Wright. What's more, his bulky frame doesn't profile anywhere else but first base, where he's also blocked. However, the Mets severe dearth of right-handed pop means Lutz will apparently get reps in the outfield this spring. He should hit if given the opportunity, but the question is whether the shoddy defense is worth the bat. If and when the Mets get desperate, we'll likely find out. Additionally, a lot of the same can be said for the similarly roadblocked Josh Satin, though with less pop in his bat. 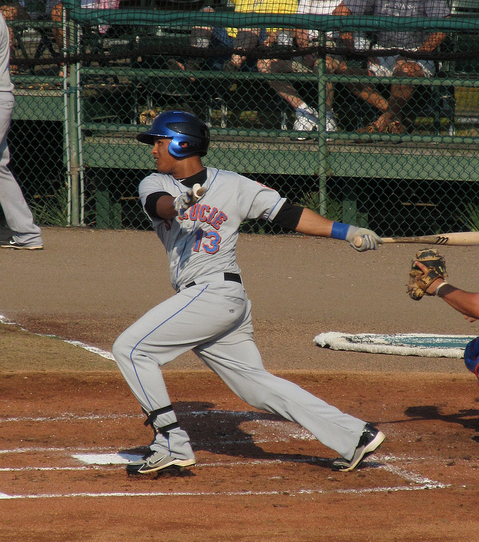 After a 2011 campaign in which the one-time highly-regarded, yet oft-injured international free agent broke out to the tune of a .350 average, he regressed in 2012 by posting a .283 average in a repeat appearance at Double-A. Regardless, the athletic 23-year-old still possesses a number of skills/tools that could help the big club in 2013. Most notably, he can hit lefties. In 2012 he batted .333/.382/.477 against southpaws, and that was no aberration (.346/.377/.516 since 2011). Additionally, though not a natural center fielder, he has taken relatively well to the position and even offers good speed, something the Mets lack. Once again, with the current state of the outfield, it's fair to expect we'll see Lagares at some point in 2013.

Finally, the 24-year-old righty is perhaps the longest shot to see the show in 2013. But the path to Queens is clearly visible following a season where he came out of absolutely nowhere to pronounce himself one of the system's most dynamic arms. The college shortstop was already late to pitching, and that was before missing 2011 to Tommy John surgery. But that didn't stop him from dominating A-ball hitters in 2012 (2.43 ERA) while featuring one of the livest fastballs in the system. Obviously you'd love to see if he can continue to move up as a starter; he's a little behind the development curve so a move to the bullpen — and a subsequent rapid ascent — would not be too surprising.