The Mets never quite appreciated what they had in Ken Singleton, who was drafted on this date in 1967.

Chances are the Nolan Ryan trade will always be the worst swap in Mets history. It's hard to imagine the team, LOL-ly as the LOLMets can be at times, getting hosed as badly as they were in that deal ever again. So, since it's a given that Ryan is the who (100+ fWAR) pitcher who got away, let's talk position players. What hitting prospect turned trade chip would the Mets have been best served to hang on to?

One man with an excellent case for that ignominious title is Ken Singleton, who the Mets picked with the the third overall selection in the old January draft on this date in 1967.

A standout for Hofstra University, Singleton joined a Mets system that was overflowing with prospects thanks to GM Bing Devine (profiled briefly in this space yesterday), one of the most astute judges of talent the team has ever employed. By 1970, the switch-hitting outfielder was nearly ready for the bigs, having advanced quickly through the minors by showing good pop (a .480 slugging percentage) and a near-elite ability to get on base (a .414 OBP bolstered by a 233:171 walk-to-strikeout ratio).

The Mets gave Singleton 184 games to prove himself during the 1970-1971 seasons. The power stroke wasn't there at first (.135 ISO), but the plate discipline was, as his .387 OBP was tops among New York outfielders during that span. None of this impressed Mets brass much, however, and four months after trading Ryan for Jim Fregosi, GM Bob Scheffing sent Singleton to the Expos as part of the Rusty Staub deal.

Now granted, getting Le Grand Orange in his prime is a way better haul than a injury-prone infielder on the wrong side of 30. What makes the trade frustrating is that Singleton was basically the same player as Staub, just five years younger (not to mention cheaper). Look at how well the two players match up in career fWAR: 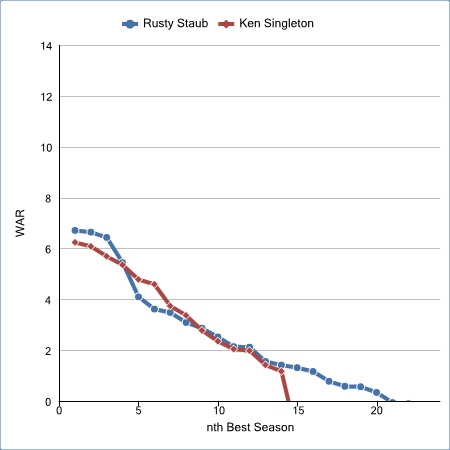 Staub's peak was slightly higher (hence the high price in prospects the Mets had to pay in order to acquire him) and he stuck around longer than Singleton, but aside from that, almost identical. The cheaper thing matters, too. After the 1975 season, the Mets opted to trade Staub rather than accede to his contract demands. Meanwhile, Singleton was making two-thirds as much and coming off a third consecutive year in which he'd finished among the top ten in on-base percentage (a streak that would later stretch to nine out of ten seasons).

Birthdays
Outfielder turned coffee drink endorser turned biz-ness man (I guess?) Tsuyoshi Shinjo turns 41 today. In honor of his special day, here's a clip of Shinjo coming out of the bullpen to lockdown a win for the SoftBank Hawks. In the event you don't feel like watching the whole thing, here are three takeaways:

Amazin'-ly Tenuous Connection
Though it has origins in the Revenue Marines founded by Alexander Hamilton in 1790, it wasn't until an act of Congress passed on this date in 1915 that the U.S. Coast Guard officially came into existence. It was in this branch of the military that former manager Joe Frazier learned the discipline and dedication that enabled him to lead the Mets to a 101-106 record his tenure at the helm. Semper Paratus, Joe.