This Week In SNY: Winter Roundup

Share All sharing options for: This Week In SNY: Winter Roundup

This won't be a standard edition of TWISNY -- there are no Mets games yet! -- but there have been several offseason goings-on at the television home of the Mets worth noting.

The Daily News reports that Gary Cohen, Keith Hernandez, and Ron Darling will play roles on the new Mets "pre-pregame show" to air at 6:00 pm on SNY. Chris Carlin and "Screamin'" Bobby Ojeda will anchor the show, which will be followed at 6:30 by the familiar Mets Pre-Game Live. The WheelHouse, a largely superfluous sports talk show in the mold of Pardon The Interruption or Around The Horn, will be canceled to make room for the new pre-pregame show.

We were initially skeptical about this idea due to possible overexposure of GKR. However, they will apparently be just guests on the show rather than hosts. So this move receives a stamp of approval. Let's see how it goes. The die-hards who demand that extra half hour of daily Mets baseball coverage should be pleased with having more GKR in their lives. Also, The WheelHouse will not be missed.

Side note: Bob Raissman, the Daily News sports media critic who provided the report linked above, is a regular on the SNY program Daily News Live. Yet he is tasked with opining on the quality of programming provided by outlets like SNY. There are far more egregious miscarriages of journalism occurring in the world every day but this still seems like a conflict of interest.

The Daily News once again reports that SNY reached out to Bobby Valentine about a studio role on Mets broadcasts.The colorful ex-Mets manager, late of the Red Sox, previously worked on ESPN's Sunday Night Baseball as both an announcer and studio analyst. The SNY role would reportedly be limited; he would appear only about 20 times a season, while filling in for Ojeda on his days off.

We retain fond memories of Bobby V's stint as Mets manager but his failed season as Red Sox manager has us a little down on him. Last offseason, we spent some time trying to convince skeptical Sox fans that they would come to love Bobby V. After a tumultuous season which saw the Sox finish last in both the standings and the court of public opinion, we can't help but feel sheepish about our case to the Fenway faithful. Having said that, we are cautiously optimistic about "Bobby Valentine, SNY analyst." He will perpetually run the risk of somehow becoming a distraction. Maybe he criticizes a player unfairly or has foolishly harsh words about SNY while appearing on another program. Who knows what he'll do next. Bobby V is generally entertaining though, and the nostalgia surrounding his sort-of return to the Mets would be welcome.

Two of our favorite Mets bloggers, Patrick Flood and Ted Berg, departed SNY this offseason, leaving Toby Hyde and his Mets Minor League Blog as the best SNY source for thoughtful, well-written commentary about the Mets. We hope that the two continue blogging Mets, and that you will bookmark their blogs if you already haven't. Flood blogs at the concisely-named PatrickFloodBlog.com. Perhaps, after shedding the SNY label, Berg's blog at Tedquarters.net can finally overtake the awesomeness that is Tedquarters.org.

Let's check in with Kevin! 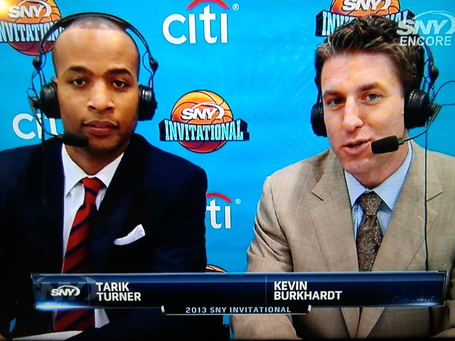 Kevin was in midseason announcing form but not midseason tanning form. Get down to spring training and catch some of those Port St. Lucie rays, Kevin!