As they so often do, Google honored an historic figure this morning with one of their wildly popular Google Doodles.

On the morning of what would be his 94th birthday, a classic hand-drawn image of Jackie Robinson rests atop the front page of one of the world's most popular web pages: 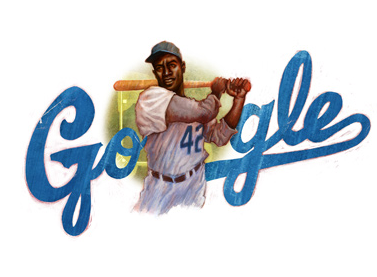 A fitting tribute to the first African-American to play major league baseball. I especially like the weathered, Brooklyn Dodgers-esque typeface.

The Mets share a special connection with Robinson in that the landmark second baseman broke through the color barrier as a New York ballplayer in the National League. In some parallel dimension, Robinson would have been a Met. For that reason, when the Wilpons built Citi Field -- in an extremely gracious and under-heralded touch -- they dedicated it's beautiful, grand entryway rotunda to Robinson, gracing the hall with a larger-than-life size 42, as well as numerous quotes and images in the spirit of his legacy.

In terms of his playing career, Robinson pretty much did it all. His Major League debut was on 15 April 1947, at Ebbets Field in Brooklyn. He would go on to bat .297 with 12 home runs and 29 stolen bases in 151 games that season, winning the inaugural Rookie of the Year award. Robinson won the Most Valuable Player award ('49), was a World Series champion ('55), made six straight All Star Games ('49-'54), and entered the Hall of Fame on his first ballot ('62). Robinson died in Stamford, Connecticut in 1972 at the age of 53. Additionally, he was posthumously honored with the Presidential Medal of Freedom for his on and off-field contributions in 1984.

There's not a ton more that I can say that will do justice to the measure of one of baseball's most truly heroic figures. For that reason I'll direct you to the excellent official Jackie Robinson website here -- as well as encourage you to take a peek at the new preview for the upcoming movie, 42, which looks like it's going to be an awesome bio-pic detailing 'The life story of Jackie Robinson and his history-making signing with the Brooklyn Dodgers'.