The Mets' forgotten second half

A look back at moments from the Mets' second half that may have slipped your mind.

Share All sharing options for: The Mets' forgotten second half

The second half of the Mets' season wasn't much fun, what with the injuries to Matt Harvey and David Wright, the underwhelming prospect cameos, and the team's 33-38 record. Still, the trio of Zack Wheeler, Jon Niese, and Dillon Gee finished strong and the All-Star Game was a success, so there were a few positive storylines for the Mets organization in the second half. Mixed in with these major storylines were some minor happenings. This post recalls moments from the second half which may have slipped your mind.

Tim Hudson is among the least detestable players on the hated Atlanta Braves. I'm actually a fan of his. So it was upsetting to watch his season end at Citi Field on July 24th when Eric Young Jr. accidentally stepped on his foot during a collision at first base. Hudson fractured his ankle; I'll decline to share video or a GIF of the gruesome injury.

EYJ was shaken up by the incident and took to Twitter to defend himself against those who thought it was no accident (Note: No religion, EYJ):

For ppl who think I would purposely try 2 hurt someone,& felt they needed to say that 2 me...I will continue 2 pray for u as well.#godbless

Hudson's wife, Kim, replied to the tweet, making it clear that she had no hard feelings:

@EYJr Thank you for playing the game the right way. You're obviously one of the good guys. We appreciate you.

Hudson believes he will be back to full health in November; here's hoping for a full recovery.

Chad Qualls goes for a tumble

Marlins relief pitcher Chad Qualls' enthusiasm and lack of balance combined to provide a top-ten GIF of the baseball season. In the eighth inning of the Mets-Marlins tilt on July 30th, Qualls struck out Omar Quintanilla to end the frame, stranding Marlon Byrd at third base. Qualls was pleased with his performance, which kept the game tied 2-2. On his way off the mound, he did this:

The Mets went on to win the game in extra innings, and Marlins manager Mike Redmond had this to say about Qualls' fall:

As soon as I saw the fist pump I put my head down. That's one of those if you win that game, you can watch it. But since we lost it's not quite as funny.

The Mets hosted the first Citi Field Sleepover on August 10th, and about 400 fans showed up. The Mets' 4-1 victory over the Diamondbacks was shown on the scoreboard, and included in the $200(!) admission price was a buffet dinner, a midnight snack, and a ticket to the penultimate game of the season. Here is a picture of the scene (via @Mets): 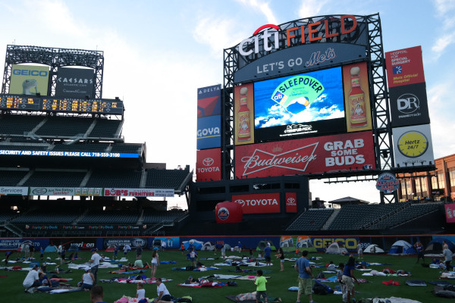 The event, especially the cost of entry, is not for me, but if there is fan interest then so be it. Maybe the extra few thousand bucks the Mets organization pocketed will be re-invested in the big 1-year, $3 million contract for [Chris Capuano/Shaun Marcum/Chris Young-type pitcher] this offseason.

Y'all know the story of Scott Kazmir and the Mets, so I won't re-hash all of it here. Current Cleveland Indians pitcher Kazmir, who once made the mistake of playing music too loud in the presence of Al Leiter and John Franco, faced the Mets for the first time in his career on September 6th. And he enjoyed it. Kazmir pitched arguably his best game of the season, tossing six shutout innings while striking out 12 and walking none. The Indians beat the Mets 8-1. Victor Zambrano's whereabouts are unknown.

Matt Harvey's worst performance of the season came weeks after he threw his final pitch. In an interview with Dan Patrick, Harvey sidestepped questions about his injured elbow, instead steering the conversation towards the product he was shilling, FANtasking by Qualcomm. It was awkward. Watch, if you can stand it:

To Harvey's credit, he acknowledged the unfortunate interview:

I’ve had a few rough outings on the mound, that was a rough outing on the radio this morning...

This will be forgotten.

Check out my similar post from the All-Star break, "The Mets' Forgotten First Half."