According to reports, Jose Abreu signed a six-year, $68 million contract with the Chicago White Sox, taking the Cuban slugger off of the market.

Despite much fawning by Mets fans—and fans of other teams—Cuban free agent first baseman Jose Abreu will reportedly sign a long-term deal with the White Sox in the very near future. Should we feel like the Mets missed out on another big-name bopper? Have a look at this:

Is Jose Abreu better than what the Mets have now? 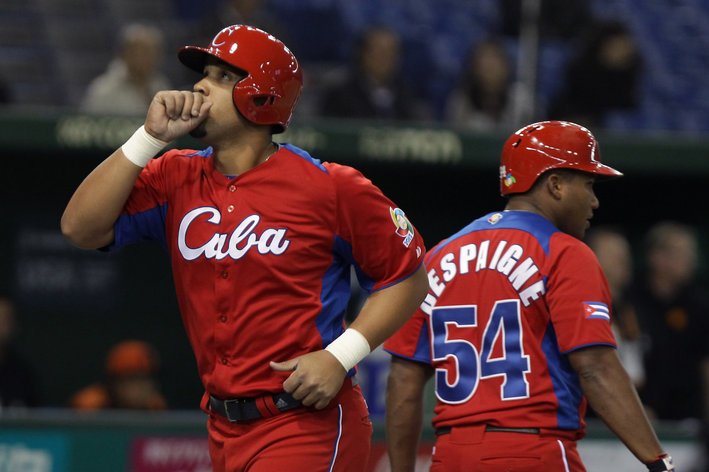 Why is Ike Davis relevant? Because regardless of what numbers computer projections and comparative algorithms attempting to normalize the competitive imbalance between the Cuban Serie Nacional and the MLB spit out, Jose Abreu was not going to hit .321/.446/.660 in a Mets uniform, nor will he in a White Sox uniform. How he will perform is anyone's guess right now, and we won't know until this time next year at the earliest. The Cuban first baseman represents tantalizing power sandwiched between doubts and uncertainties, prodigious power that might go untapped because of an inability to sufficiently hit MLB pitching. In other words, Ike Davis.

Besides the normal ups-and-downs associated with hitters at the plate or having difficulty against the best pitchers in the league, will Abreu be able to handle the inner third of the plate, as scouts have wondered aloud? Will he lay off sliders away? Will he be able to withstand the rigors of a 162-game, six-month season, something he has no experience doing? All of these things will limit his ability at the plate. If he has difficulty making contact with the ball, or getting on base, a lot of good his world-renown home run power will do.

I don't necessarily expect Jose Abreu's MLB career to crash and burn. Like I said earlier, how he does over the course of the 2014 season is open to plenty of debate, and we can't say anything definitive about it until the season comes to an end. He might be a great player, he might be an average player, he might be a below average player, he might be a horrible player. What he is not, and should not be expected to be, is a baseball savior, either for the Mets—when we wonder what could have been—or for the White Sox going forward. Many tend to forget that, within his legendary Cuban baseball statistics, there is a man prone to the peaks and valleys hitters go through, on top of all of the question marks that are attached to his baseball résumé being an outsider coming to the major leagues.

The Mets lost out on signing the Cuban first baseman, but they didn't lose out on signing a guaranteed once-in-a-lifetime force that would have all but assured them the National League pennant for years to come. I wouldn't have complained if the Mets were the ones to sign him, but I'm not going to lament the fact that they didn't, and isolate the moment as the reason the Mets aren't competitive. The team has similar players with similar profiles and similar uncertainties. If we project in our minds Jose Abreu to become a monster in Chicago, why not project those other guys to break out as well?