The 1988 Mets: A would-be dynasty derailed

A World Championship in 1986 was supposed to be the start of something big in Flushing. Instead, the 1988 team—one that recorded 100 victories—saw its season end in great disappointment, a portent, perhaps, for the tough times to follow.

Share All sharing options for: The 1988 Mets: A would-be dynasty derailed

When the New York Mets celebrated their 1986 World Series title, it was widely expected that they would win another title or two in short order. With the great mix of young talent—Darryl Strawberry, Dwight Gooden, and Ron Darling—and veteran presence—Gary Carter and Keith Hernandez—there was little reason to doubt that notion.

But as is certainly known all too well to Mets fans, the team hasn't worn the championship crown since that spectacular '86 season. There have been several opportunities in the past 27 years for New York to celebrate another title, and the 1988 Mets may have had the best one.

After a failed attempt to win the National League East in a turmoil-filled 1987, New York sought a return to the postseason with a roster that had mostly been intact for the previous four seasons. Right from Opening Day, Davey Johnson's club appeared to be more focused as they jumped out with a 15-6 record in April. By the end of May, the Mets were 36-17 and 5½ games ahead of Pittsburgh.

A so-so summer gave the Pirates and Montreal Expos some hope heading into the stretch run, but the Mets turned it on when it counted. New York's late-season success coincided with the insertion of two-time Minor League Player of the Year Gregg Jefferies into the lineup. The Tidewater product had 35 hits (including six home runs) in 29 games as the Mets began to pull away from all challengers.

They won 30 of their final 42 as the divisional lead grew and the magic number shrunk through September.

Part of the reason for their overall NL East dominance was having a pair of MVP candidates in the lineup: Strawberry and Kevin McReynolds. Strawberry had a career year with 39 home runs, 101 runs batted in, and 101 runs scored, and McReynolds, who was acquired a year earlier in a deal with the San Diego Padres, hit .288 with 27 homers and drove in 99. 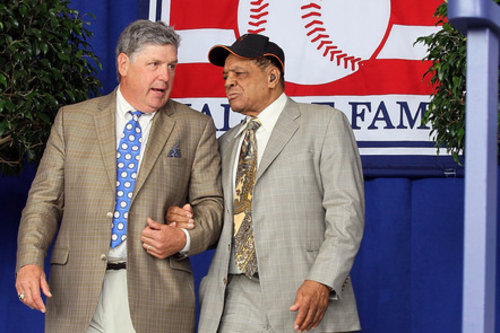 But a more important element to New York's success was the consistency of its pitching. Each of the Mets' five main starting pitchers—Gooden, Darling, David Cone, Bob Ojeda, and Sid Fernandez—had an earned run average below 3.25. All five had at least 10 victories, led by Cone's 20. Ojeda had 10 wins and a 2.88 ERA before his season prematurely ended when he nearly severed the upper third of his left middle finger while trimming a hedge in the yard of his house. Randy Myers was a fixture in the bullpen with 26 saves and a 1.72 ERA.

It was Darling who earned the spotlight in the division clincher on September 22 against the Philadelphia Phillies. In front of a partisan Shea Stadium crowd, New York got a 3-for-4 night from Mookie Wilson and three late runs to move on top. Darling did the rest, going the distance with a six-hitter in a 3-1 win. His strikeout of Lance Parrish ended the game and started the celebration.

The Mets finished 100-60, their fifth straight year with 90 or more regular season victories. Their matchup in the National League Championship Series appeared to be a favorable one. On paper, the Mets were heavy favorites to defeat the Los Angeles Dodgers as New York had won 10 of 11 meetings with L.A. during the year.

In the series opener at Dodger Stadium, Dwight Gooden faced off against Orel Hershiser, who had just broken Don Drysdale's mark of 58⅔ consecutive scoreless innings. Both aces lived up to their billing, but it was L.A.'s "Bulldog" who had a 2-0 lead through eight. A Strawberry one-out double in the ninth drove in Gregg Jefferies, which put a dent in the seemingly invincible Hershiser and knocked him out in favor of relief ace Jay Howell.

After a McReynolds walk and a Howard Johnson strikeout, Howell faced Gary Carter. With two strikes, Carter hit a soft liner that fell for a hit in front of center fielder John Shelby. Soon after Strawberry scored to tie the game, McReynolds was close behind. Shelby's throw to the plate was on target, but McReynolds knocked the ball loose from catcher Mike Scioscia and touched the plate safely to give New York the game-winning run.

Game 2 went the Dodgers' way, as David Cone's start went off the rails in the bottom of the second. Los Angeles scored four in the frame, and Tim Belcher struck out 10 in 8⅓ innings as they drew even in a 6-3 final.

The scene shifted from Hollywood to the Big Apple for Game 3. Following a rainout, L.A. turned to Hershiser at a cold and wet Shea Stadium against Ron Darling. Both teams were affected by the slick turf and football-like weather. The suboptimal playing conditions were overshadowed by controversy in the eighth inning. 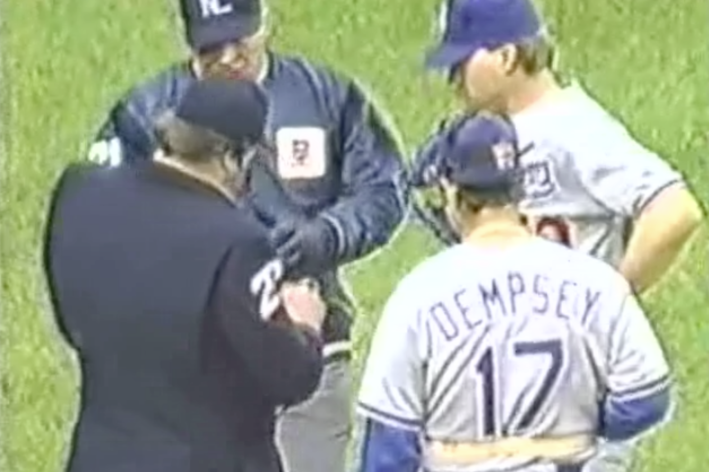 Down 4-3 and facing Jay Howell, McReynolds worked a three-and-two count. Then Davey Johnson came out of the dugout and asked home plate umpire Joe West to take a look at Howell's glove. Crew chief Harry Wendelstedt inspected the glove as well, and discovered pine tar. Howell was then tossed from the game due to the illegal substance and was subsequently suspended.

Following Howell's departure, the Mets jumped on the three Dodger relievers that followed, scoring five runs in the eighth and eventually winning 8-4.

Poised to take a stranglehold in the series, New York had Gooden on the hill. After being touched up for a pair of runs in the first inning, he settled down, occasionally flirting with dominance. Los Angeles countered with John Tudor, who appeared to be outdueling Gooden until lightning struck twice in the bottom of the fourth. Following a Hernandez bloop single, Strawberry rocketed one over the right field fence to tie the game. Just two pitches later, McReynolds's first hit of the NLCS was a home run to left.

It appeared that would be all Gooden needed, as Doc cruised into the ninth with a 4-2 advantage. Instead of going with Randy Myers to finish the job, Johnson stuck with Gooden—a Grady Little moment many years before anyone knew who Grady Little was.

John Shelby led off with a walk, which proved to be a significant free pass. The next batter was Mike Scioscia, owner of just three home runs in the '88 regular season. Attempting to get ahead in the count after letting Shelby get away, Gooden's first offering was a fastball down the heart of the plate. Scioscia read it perfectly, crushing the pitch over the 358-foot marker in right field and sending the Dodgers' dugout into exultation and Mets fans into despair. Myers relieved a distraught Gooden and kept the score knotted at four heading into extra innings.

Both bullpens were effective enough to preserve a tie through 11. After two outs were recorded by Roger McDowell in the top half of the 12th, Kirk Gibson hit his biggest home run of year (at the time) with a round-tripper to right-center.

Now behind 5-4, the Mets' efforts in the bottom of the 12th began with a single to right field by Mackey Sasser. Lee Mazzilli then followed with a base hit of his own, putting runners at first and second. A prime opportunity to move both into scoring position failed for Gregg Jefferies, as a bunt attempt went foul and the next pitch resulted in a fly out to Gibson in left.

Former Met reliever Jesse Orosco came in to face Hernandez and walked him to load the bases. But the man who recorded the final out of the '86 World Series responded by getting Strawberry to pop out. With a depleted bullpen, Lasorda turned to Hershiser to get the final out. McReynolds's shallow fly to center appeared to be a reprise of Carter's Game 1 hit, but this time it was tracked down by Shelby and a golden chance to go up 3-1 instead turned the series into a best-of-three affair.

Game 5, which started less than 12 hours after the conclusion of the fourth game, saw the Dodgers build on the momentum they gained the previous night. Los Angeles jumped out to a 6-0 lead in the fifth against Sid Fernandez and went on to win 7-4 and put the Mets on the precipice of elimination heading back to the West Coast.

David Cone showed why he was a 20-game winner

David Cone, though, showed why he was a 20-game winner with his Game 6 performance, holding the Dodgers to five hits and just one run. McReynolds went 4-for-4 and recorded three RBI, two of which came on a home run in the fifth. With that, the Mets kept their season alive and forced a deciding game in L.A.

But just as quickly as Game 7 began it was seemingly over, as Ron Darling was pummeled early. The Dodgers roared out of the gate, taking advantage of two Mets errors and plating six runs over the first two innings. With Orel Hershiser on the mound, New York never had a chance. The LCS MVP continued his magical run of success with a five-hit complete game shutout. Howard Johnson's strike out ended the series and sent the mighty Mets out with a whimper.

As is well known, the Dodgers went on to beat the 104-win Oakland A's in the World Series with the heroics of injury-riddled Kirk Gibson's home run and two more complete game gems by Hershiser.

It's hard to say if the Mets would have won it all in '88 had they prevailed in L.A. Was Oakland an under-performing club or was it simply a case of Dodger destiny that was too much to overcome? Either way, the Mets fell short of expectations.

What was supposed to be a second World Series at Shea in three seasons instead became a disappointing conclusion, which proved to be a harbinger of more frustration in the coming years.