We kick off The Piazzas with the Best Rookie category. No Mets player has won the NL Rookie of the Year Award since Dwight Gooden in 1984, and barring a bizarre vote by the BBWAA, the drought will continue in 2013. That doesn't mean there weren't any standout Mets youngsters this season.

The nominees for Best Rookie are:

Travis d'Arnaud: One of two top prospects, along with Noah Syndergaard, acquired in the R.A. Dickey trade, d'Arnaud debuted in mid-August. He didn't live up to the hype, hitting just .202/.286/.263 in 112 plate appearances, but his pitch framing ability impressed. It would be fitting if a catcher could pick up a Piazza, but d'Arnaud faces long odds in this category.

Juan Lagares: The speedy outfielder finished with the fourth-best fWAR and second-best rWAR among Mets position players, which is pretty cool except that much of his WAR value came via outrageous defensive statistic numbers. Few would doubt that Lagares looked terrific in center field this season, but his 2013 defensive stats had him as a full-season +35 out there. That's like Andruw Jones in his prime; I'm not sure Lagares is quite that good. Still, he doesn't cost much, and even if he doesn't significantly improve on his underwhelming .242/.281/.352 slash line this season his defense is probably good enough that he could be an overall average player.

Scott Rice: The 31-year-old southpaw Rice made his major-league debut on Opening Day, after toiling in the minor leagues since 1999. He got his money's worth in the majors, appearing in a team-high 73 games before his season ended in early September due to a sports hernia injury. Rice's overall numbers were pedestrian for a reliever -- 3.71 ERA, 3.40 FIP -- but he was especially effective against lefthanded batters. He held them to a .174/.244/.223 slash line in 121 at-bats. We wish him a speedy recovery from surgery:

Surgery is over, everything went well. Hoping to get in the game tomorrow haha.Thank you for all the support. @mets pic.twitter.com/UZay8bQxej

Josh Satin: After tearing up Double-A and Triple-A over the last few seasons, Satin got an extended look in the majors when he was called up in mid-June. And he made the most of the opportunity. Satin's 124 wRC+ was good for third best among qualified Mets position players, and his 151 wRC+ against lefthanded pitching showed why he might be useful as part of a first base platoon going forward. He's an easy guy to root for and I expect that he'll be on the Mets' bench next season.

Zack Wheeler: Wheeler made his debut on what's known as "Super Tuesday," when he and Matt Harvey each started a game in a doubleheader against the Braves on June 18th. Wheeler pitched well -- six innings, four hits, no runs, seven strikeouts -- and the Mets won both games that day. He finished the season with a 3.42 ERA in 100 innings pitched, striking out 84 and walking 46. He struggled with his control at times, but he's just 23 years old and his stuff is fantastic. Thank you, Carlos Beltran.

And the Piazza for Best Rookie, in a very tight vote, goes to...

Juan Lagares! Lagares and Zack Wheeler tied in the voting, but the Piazzas Commissioner gave the hardware to Lagares because he received more first-place votes. This is America, we don't do ties. Take a bow, Juan! 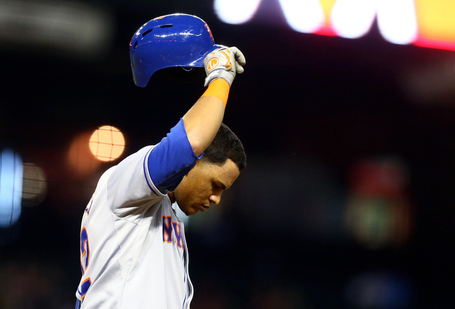