The Piazza for the Mets' worst relief pitcher of 2013 goes to...

Today we present the Piazza for Worst Relief Pitcher. In fairness to Piazza, perhaps this specific award should be called the Carrasco or the Mota. Maybe the winner can sell the gold Piazza for some cash, in case this whole pitching thing doesn't work out.

The Mets bullpen was, once again, terrible this season. Both its adjusted ERA and adjusted FIP were the worst in the league, and its strikeout rate was the lowest in the league. This was disappointing, considering some of the seemingly-shrewd pickups the front office made last offseason. When putting together a bullpen, Sandy Alderson has proven to be no Kevin Towers.

The nominees for Worst Relief Pitcher are:

David Aardsma: Aardsma was an elite reliever for the Mariners in 2009, but has struggled with injury and performance since then. He debuted with the Mets in early June this season and actually pitched well for a few weeks. In June and July, he struck out 21 in 22.1 innings and sported a 3.18 ERA. August and September were not kind to Aardsma though, as he posted a 5.82 ERA during those two months. His full-season -0.7 fWAR was second-worst for Mets relievers. However, he does have a good sense of humor:

When I pitch this is what my wife does.... pic.twitter.com/sF1ln1LAPZ

Scott Atchison: Before the season, Grant Brisbee of Baseball Nation called Atchison "baseball's most underrated reliever." Atchison probably lost that title after his 2013 season, during which his strikeout rate dropped and he battled injury. He and his 3.87 FIP weren't exactly awful, but he tied for the team lead with eight "meltdowns" and generally didn't inspire much confidence when he entered a game

Greg Burke: Burke's case for the Piazza is strong. His 5.68 ERA was second-worst in the bullpen (minimum 10 innings pitched), and he walked 15 in 31.2 innings. In his defense, he was up and down all season between Triple-A Vegas and the big club. He made both a minor-league and major-league appearance in every month of the season. It's tough to get in a groove when you're constantly flying across the country.

Robert Carson: Yama-hama, it's fright night! The southpaw Carson sported one of the most shockingly bad stat lines in MLB this season. His HR/9 was higher than both his K/9 and BB/9, as he allowed nine home runs in just 19.2 innings pitched. Extrapolate that to 200 innings and he would have allowed 91 home runs. He just can't get batters out. Despite throwing fewer innings than 10 other Mets relievers, he is a strong contender for the Piazza due to the impact he had during his relatively brief time on the mound this season.

Frank Francisco: Francisco barely pitched this season. He was on the disabled list until September, rehabbing from offseason surgery to remove a bone spur from his shoulder. He struck out six in 6.1 innings, finishing with a 4.23 ERA. Francisco also reportedly advised Jenrry Mejia to spend the season rehabbing on the DL, in order to rake in a major-league salary. If he wins the Piazza, it will probably be more for his entire Mets body of work, rather than for just 2013. Here is a close-up of Fat Frank in the ninth inning of game 162, the final image of his Mets career: 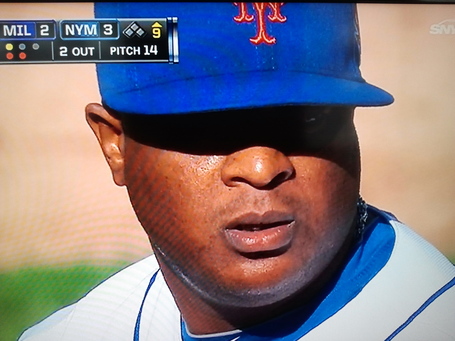 Brandon Lyon: Lyon was a fine reliever for the Astros and Blue Jays in 2012 (3.10 ERA, 3.23 FIP in 67.1 innings), so he looked like a useful addition to the Mets bullpen. However, he struggled with the Mets, with one of his final indignities being a 0.2 inning, five-hit, six-run performance against the Nationals in late June. His 4.98 ERA and 1.63 WHIP in 34.1 innings pitched just didn't cut the mustard, even in a bullpen as bad as the Mets'. A two-mph drop in velocity probably didn't help; he was just too hittable. The Mets released him in early July.

Anthony Recker: Just kidding, sort of. Recker pitched one bad inning in relief at the end of a blowout loss to the Nationals in late June. He allowed two runs, walking one and giving up a big dong to Ian Desmond. Excusable, since he's a catcher by trade. Nonetheless, Amazin' Avenue staffer Brock Mahan was not impressed by Recker's 18.00 ERA and 19.05 FIP, so he gave Recker a third-place vote.

And the Piazza for Worst Relief Pitcher goes to... 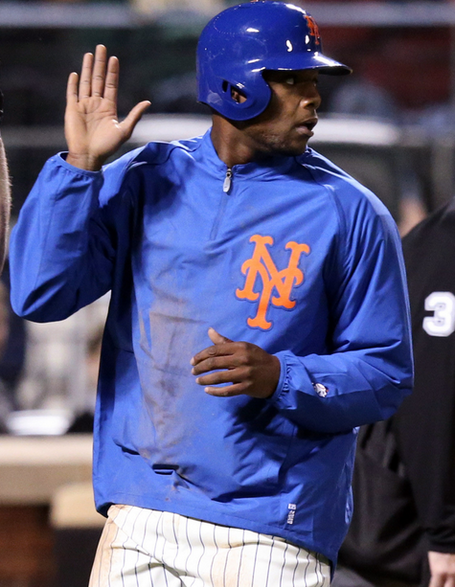