Yesterday, Robert Carson took home the Piazza for Worst Relief Pitcher. We're giving out a more positive award today, that of Best Relief Pitcher. The Mets' bullpen was atrocious this season, but a handful of relievers did a nice job. We honor them today for their efforts.

The nominees for Best Relief Pitcher are:

Gonzalez Germen: Germen made his major-league debut in early July after racking up strikeouts at Triple-A Vegas. He continued to strike guys out in the big leagues, tallying 33 K's in 34.1 innings pitched. He also walked 16. Still, Germen had the second-best FIP in the bullpen (behind Parnell), primarily due to the strikeouts and allowing only one home run. He'll compete for a bullpen job next season.

LaTroy Hawkins: Hawkins seemed cooked early in the season. Through his first five appearances he gave up six runs and didn't appear to be fooling anyone with his steady diet of fastballs. However, he generally pitched well the rest of the season, finishing with a 2.93 ERA and 3.06 FIP in 70.2 innings pitched. That's a lot of work for a 40-year-old. He was second in the Mets bullpen in both fWAR and rWAR, behind the next man on this list. Hawkins was Sandy Alderson's best reliever acquisition from last offseason.

Bobby Parnell: It's been fun watching homegrown Parnell improve over the years. He enjoyed his finest season in 2013, at least until he went down with a neck injury in late July. Parnell converted 22 of 26 save opportunities, sporting an ERA of 2.16 with a 2.33 FIP to go with it. His first-strike % was the best of his career and he continued to induce ground balls at a strong clip which, in turn, helped him allow just one home run in 50 innings pitched. The Piazza for Best Relief Pitcher seems like a battle between Parnell and Hawkins. Parnell pitched with higher quality but Hawkins logged 20 more innings. Tough choice.

Anthony Recker: AA staffer Brock Mahan gave Recker a third-place vote for Worst Relief Pitcher and also gave him a vote for Best Relief Pitcher. To quote Brock, "Even if Recker is no Rob Johnson, it's always fun to see backup catchers take the mound." Here's a shot of Recker throwing a pitch: 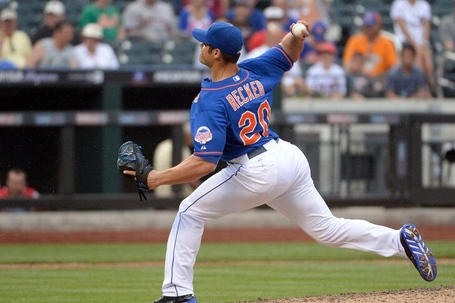 Scott Rice: Rice received a vote for Best Rookie and probably deserves some down-ballot votes for Best Relief Pitcher. His job was to get out lefthanded batters and he did that job well. They hit just .167/.244/.223 against him over 138 plate appearances. His numbers against righties weren't pretty, but hey, that's not what he's paid to do. Also worth noting: Rice's 73 appearances were just five behind the NL lead of 78, despite his missing the final month of the season with injury.

Carlos Torres: Torres made 24 relief appearances and nine starts for the Mets in 2013, pitching well as a reliever and so-so as a starter. He finished with a 1.47 ERA in 36.1 innings out of the bullpen, holding the opposition scoreless in 19 of his 24 appearances. Not bad. He often went more than one inning in relief, a useful ability that could win him a spot in the 2014 bullpen as the long man.

And the Piazza for Best Relief Pitcher goes to...

Bobby Parnell! Captain Wright stopped by to congratulate Bobby on his big win: 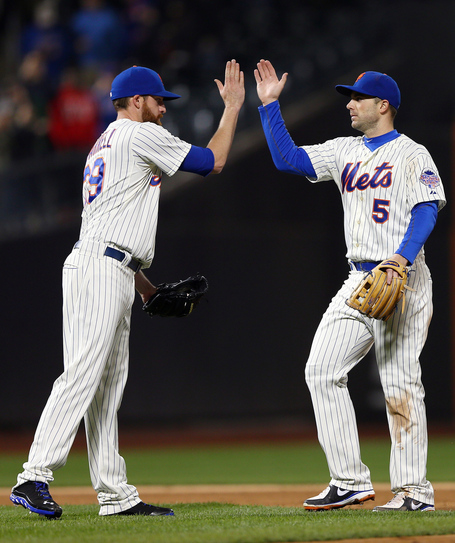