Suk-Min Yoon, a former KBO Triple Crown winner and one of the top pitchers in Korea, will play in Major League Baseball next season. Should the Mets pursue him?

A native of Guri, a city roughly ten miles south of Seoul, South Korea, Suk-Min Yoon was a standout athlete at Yatap High School. The KIA Tigers drafted the lanky right-hander in 2005, selecting him with their pick in the 2nd round of the draft. Yoon made his professional debut April 2, and went on to have a decent season, pitching 84 innings in 53 games with a 4.29 ERA, being used primarily as a high-leverage reliever. His 2006 season would be more of the same, though he began to receive shots at closing as well. In 2007, the Tigers finally converted Yoon into a full-time starter when they moved starter Ki-Joon Han to the bullpen to fill their closer hole.

The right-hander made a relatively successful transition, recording a 3.78 ERA in his first season as a starter. He did go 7-18 because of very poor run support, leading the league in losses that year. One good thing did come out of that lack of run support and poor winning percentage: an excellent nickname. Suk-Min Yoon was deemed "The Unfortunate Ace" because his team was simply unable to win games for him despite his pitching well.

His luck changed in 2008 when, in a complete reversal of fortune, "The Unfortunate Ace" won 12 ballgames before July 31. He ended the season with a 2.33 ERA and 119 strikeouts in 154⅔ innings pitched, ranking him among the best pitchers in the KBO that year. He narrowly edged out Kwang-Hyun Kim for the league-leading ERA by six-hundredths of a point, but trailed Kim in wins and strikeouts. Elected to the All-Star Game for the first time in his career, the right-hander took a huge leap forward and put his name in the running for best pitcher in Korea, at least for the time being. 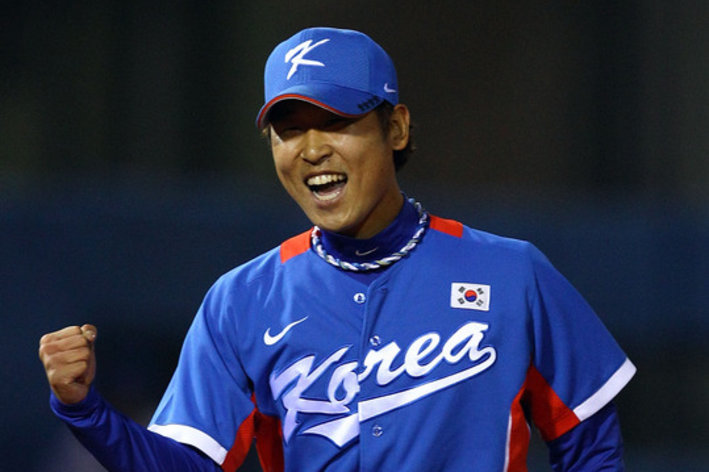 We profiled Yoon last year as well. See what we said then!

His good fortune carried into the 2009 season, starting on the right foot in the World Baseball Classic. He went 2-0 in the competition with a 1.13 ERA and 13 strikeouts in 16 innings pitched. When teammate Ki-Joon Han went on the disabled list, the Tigers called on Yoon to fill the void and act as team closer once more. He notched seven saves, posting a 2.45 ERA before being moved back into the starting rotation. No sooner had he been moved back into the starting role than he was removed once more, this time to the disabled list because of a shoulder injury.

Yoon missed roughly six weeks, but returned in July and pitched well for a short time. After a disastrous game against the Doosan Bears in early September in which he allowed 10 earned runs in 3⅓ innings, the team decided to end his season and give him extra time to rest and recover for 2010. All told, Yoon's 3.46 ERA would have been the 6th lowest in the KBO if he had qualified for the ERA title in 2009. Moreover, he had career best strikeouts-per-nine and walks-per-nine ratios, and he was selected to his second All-Star Game. The 2010 season was a clear regression for Yoon, who pitched uncharacteristically poorly, perhaps because of lingering shoulder issues. His 3.83 ERA was a career high and he barely pitched 100 innings.

The Unfortunate Ace would not have an unfortunate season in 2011. The hurler won the KBO Pitching Triple Crown, the first pitcher in the KBO to do so since Dong-Yeol Sun, cementing his status among the best pitchers in contemporary Korea. He went 17-5 with a 2.45 ERA that year, striking out 178 batters in 172⅓ innings. He beat Sun-Woo Kim for the ERA title by .68 points, earned one more win than Kim, and struck out 28 more batters than Ben Jukich and Dustin Nippert. He won the KBO MVP Award by a large margin, recieving 62 of the 91 votes. In addition, he was voted to his third All-Star Game and won his first Gold Glove.

Yoon regressed marginally in 2012, but given the lofty heights he achieved in 2011 he had nowhere to go but down. His 3.12 ERA and 2.82 FIP were the second lowest marks of his career, while his walks-per-nine and hits-per-nine rates shrunk to career lows. In 2013, The Unfortunate Ace hurt his pitching shoulder during the WBC and began the season injured. When he returned, the team once more volunteered him to be serve as closer. Owing to his injury and unhappiness being shifted around from role to role, the 26-year-old had his worst season in recent memory. His fastball lost about 2 MPH and his slider looked flatter.

At the season's close, Yoon ended years of speculation by announcing his intention to sign with an MLB team for the 2014 season. After his Triple Crown-winning 2011 season, the Korean hired Scott Boras to represent him, starting the speculation and rumors that he would ask his team to post him. The right-hander never did, but now that he's an international free agent he will be taking his services to North America without the KIA Tigers acting as a middleman.

His KBO stats are as follows:

Throwing from a three-quarters delivery, Yoon's fastball generally sits in the low-90s and tops out in the mid-90s. Because of his injury in 2013, his fastball velocity was down slightly, still averaging about 90 MPH or so but not topping out much higher than that. His slider—his primary out pitch—sits in the mid-80s and is a tight, hard-breaking pitch. He throws the occasional change-up and curveball to round out his repertoire.

Does He Make Sense For The Mets?

It seems like an odd time for Yoon to leave Korea to come to the U.S. to play baseball. To some extent he can cash in on the success his fellow countryman, Hyun-Jun Ryu, but given that he is coming off of a down season in 2013, his ability to obtain optimum value for his services is considerably diminished.

Despite serving as team closer at the end of the 2013 season, whatever team signs Yoon is going to use him as a starting pitcher. I don't think that he has the stuff to thrive as a high-leverage reliever in the U.S., and since it is hard enough to find reliable starting pitching, why alter an equation that has historically worked by converting him into relief? Yoon himself has commented that he expects to be used—and paid—like a starter, so he is obviously not going to sign a deal with a team that doesn't give him that opportunity.

The Mets can safely pencil Jonathon Niese, Dillon Gee, and Zack Wheeler into their rotation for 2014, but after that things get hazy. Jenrry Mejia certainly made the case that he deserves to get a shot to start, but his long injury history leaves plenty of uncertainty. Even if you assume good health for Mejia, that still leaves one final spot in the rotation to be filled. Would it more cost effective to take a gamble on Yoon and his upside and hope that he is able to thrive against MLB batters, or to give a back-of-the-rotation starter less money but know to expect marginal, mixed results?

Speaking of money, what is a realistic salary projection for Suk-Min Yoon? Hyun-Jun Ryu's six-year, $36 million contract is a good starting point. In Yoon's favor is that "Ryumania" was in full effect this past season, and as a result, a team desperate for pitching might believe that the right-hander is capable of having similar success in Major League Baseball and will pay him accordingly. Working against Yoon is that he is coming off of an injury-shortened season and, realistically speaking, he was never a better pitcher than Ryu. Though putting up overall comparable numbers, Hyun-Jun Ryu was a durable, left-handed workhorse, whereas Yoon was a year older, right-handed, frailer, and, according to some, poutier and more prone to unraveling when the pressure was on.

None of that is to say that Yoon is a bad pitcher, of course. Given his age, I think a three-year deal might be best for all sides. It's a mitigates some risk on the part of the signing team by keeping the contract term within reason, and it would offer Yoon the chance at free agency again when he is 30 years old, an age that wouldn't make him wholly undesirable. In terms of annual value, anything between $5 million and $10 million would be reasonable, with the actual number probably falling on the shorter side.