The Piazza for the Mets' worst starting pitcher of 2013 goes to...

Here is a recap of The Piazzas so far:

Today, we hand out the Piazza for Worst Starting Pitcher. Alternatively, we can call it the Ollie. Mets starters were about average in the aggregate this season, a welcome development considering that their offense and bullpen were decidedly below-average. Still, the Mets had their share of bums make starts this season. There are several strong (weak?) candidates to choose from, and a couple surprise votes were cast.

The nominees for Worst Starting Pitcher are:

Aaron Harang: The veteran Harang joined the Mets in September after spending much of the season getting shelled with the Mariners. He made four starts with the Mets, logging a 3.52 ERA and 5.31 FIP with 26 strikeouts and 12 walks. Not great, not awful, not really anything.

Matt Harvey and Jenrry Mejia: I'll let AA staffer Brock Mahan explain his ballot: "Marcum deserves the top spot based solely on his performance. Harvey and Mejia do too, but only because they were so good that it's the worst we didn't get to see them pitch more often."

Jeremy Hefner: Hefner was strong in June (30 IP, 1.80 ERA) but struggled in every other month of the season. He continued his annual tradition of giving up an obscene amount of runs to the Phillies in a start. In 2012, he gave up seven runs while recording no outs; in 2013, it was eight runs in two innings pitched. Hefner went down with an arm injury in August and ended up getting Tommy John Surgery. He probably wasn't the worst starting pitcher for the Mets this season.

Aaron Laffey: Laffey wins the "Who? Award", given to the most forgettable Mets player of the season. He made two poor starts in April for the Mets, allowing five runs on 14 hits in 8.1 total innings pitched. He was released after a disastrous relief appearance against the Nationals, and actually got picked up by the Blue Jays. However, he walked five in 2.2 innings in a start against the Yankees, and after that he was done in the major leagues for 2013.

Shaun Marcum: From 2010-2012, Marcum posted a 112 ERA+ in 520 innings pitched. So the one-year/$4 million + incentives contract he signed last offseason seemed like a nice bargain for the Mets, even with Marcum's injury history. Things didn't go as hoped, though. In 12 starts and two relief appearances, he had a 5.29 ERA. It was 5.64 just as a starter; the highlight of his season was his eight-inning, one-run relief performance in the Mets 20-inning loss to the Marlins in early June. Apologists will point to his less-awful 3.91 FIP as a starter. However, Marcum's low-velocity stuff looked very hittable this season, so I'm not prepared to simply handwave away his BABIP and performance with runners on base. Marcum also went off on Ron Darling and Gary Cohen on Twitter after the minor Frank Francisco/Jayson Werth hit-by-pitch controversy. Adios, Shaun.

Daisuke Matsuzaka: Dice-K was signed in late August after spending most of the summer in the Indians' farm system. His first three starts were unwatchable dreck, and not just because he gave up 15 runs in 12.1 innings. His Trachsel-esque pace inspired me to share the things I'd rather do than watch him pitch, and SNY produced a Dice-K timer to count off the many seconds he took in between pitches: 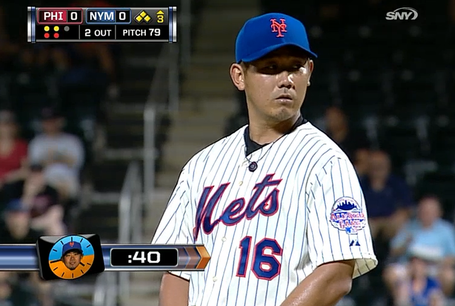 He shocked the Mets world by pitching well over his last four starts of the season (26.1 innings, 1.37 ERA, 21 strikeouts). Bringing him back on a minor-league deal might make sense, but a major-league deal would be a mistake.

Collin McHugh: It was all downhill for McHugh with the Mets after his impressive debut start in 2012. He struggled in September 2012, and didn't look like a major-league caliber pitcher in three appearances (one start) for the Mets in 2013. He went four innings in a start against the Marlins in early June, giving up four runs on six hits while walking three and striking out none. That was his last appearance with the Mets; he was traded to the Rockies for Eric Young Jr. soon after. I'm thinking the Mets won the trade, although I suppose there's time for McHugh to turn things around.

Carlos Torres: Torres made nine starts, and three of them actually went pretty well. However, he was tattooed in a couple starts, and his final line was a poor 4.89 ERA/4.88 FIP in 49.2 innings pitched as a starter. He could be a decent long-man/spot starter but probably isn't a worthy full-time member of the rotation going forward.

And the Piazza for Worst Starting Pitcher goes to...

Shaun Marcum! Terry Collins is here both to present Marcum with his award and to tell him to get the hell out of here: 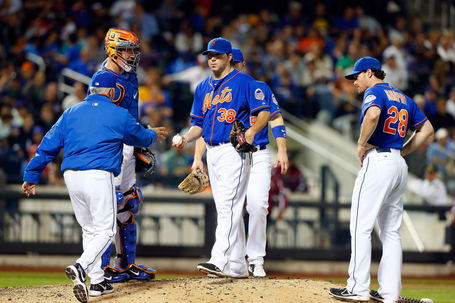