The Piazza for the Mets' worst position player of 2013 goes to...

Unlike the Piazza awarded yesterday for Best Starting Pitcher, you can make a credible case for several players to take home the Piazza for Worst Position Player. The black hole positions for the Mets this season were shortstop and first base, and the outfield as a whole wasn't so hot offensively, save Marlon Byrd. The nominees for Worst Position Player come from those positions:

Rick Ankiel: In one of the more pointless and puzzling in-season moves the current front office has ever made, Ankiel was signed in mid-May after being cut by the lowly Astros. He did hit two home runs and a triple during his first eight starts as a Met, but things went poorly thereafter and he was released in early June. Ankiel's final Mets slash line was .182/.239/.364 in 71 plate appearances. He's probably finished as a big-league player.

Ike Davis: For the second season in a row, Ike was a catastrophe in the first half. Only this time he didn't have the excuse of valley fever to fall back on. Ike went 0-for-5 with four strikeouts on Opening Day, a harbinger of things to come. His slash line through early June was .161/.242/.258 and he had just four home runs. His once laudable defense took a dive as well. This time around, Ike was sent down to Triple-A Vegas, where he punished minor-league pitching. Ike looked better following his return to the bigs in early July, but his post-return OPS of .872 wasn't enough to undue the first-half damage.

Kirk Nieuwenhuis: After a 2012 season during which he played mediocre defense and struck out a ton, Nieuwenhuis entered 2013 as a reserve outfielder. After struggling in April in limited playing time (2-for-16 at the plate with eight strikeouts), he was demoted to Triple-A. He didn't exactly light it up in Vegas, but he did get recalled in June. For the next two months with the Mets, he continued to struggle (.664 OPS in 91 plate appearances) and he was demoted again in late July for the rest of the season. His game-winning three-run home run against the Cubs on June 16 was a season highlight though. I'm thinking he doesn't have much of a future with the Mets. Even if Kirk amounts to nothing more in the big leagues, we'll always have this:

Omar Quintanilla: Mets shortstops combined to post a putrid OPS of .561 (league average at the position was .681) and Quintanilla was a big reason why. He was pressed into full-time duty when Ruben Tejada injured his right quad in late May. Unfortunately for everyone, Q just isn't an everyday player. His defense was passable, but his performance at the plate was brutal. He hit .222/.306/.283 in 359 plate appearances, which is about 300 plate appearances too many for a guy who is a back-up big-leaguer at best. If he's back in 2014 it must not, and likely will not, be as anything resembling a starter.

Ruben Tejada: Young Ruben could not build on his respectable 2012 season, during which he accumulated 1.8 fWAR and looked like an average-ish shortstop. He struggled mightily this season both offensively and defensively. He didn't hit for average, hit for power, or draw walks, and he made eight errors despite playing just 57 games. Tejada hit the disabled list in late May and didn't return until September. A week after returning, he broke his leg crashing into Andrew Brown while catching a pop-up. All told, he hit .202/.259/.260 while posting an fWAR of -0.3 and an rWAR of -0.9. On top of that, Sandy Alderson publicly criticized Tejada's work ethic. Either Stephen Drew or Jhonny Peralta will do as the Mets' 2014 Opening Day shortstop.

Jordany Valdespin: Combine sub-replacement-level production with a bad attitude and you're a lock for a Worst Position Player nomination. Valdespin's game-winning grand slam against the Dodgers in April was a fun moment, but the rest of his season was forgettable. He hit an Ankiel-esque .188/.250/.316 in 144 plate appearances, silencing his supporters who hoped to see him get more playing time. Also, he got drilled with a pitch by the Pirates in May the day after pimping a home run, and none of his teammates came to his defense. Very telling. He later called Terry Collins a bad word upon hearing of his demotion to Triple-A Vegas in July. The final indignity was incurring a 50-game suspension related to the Biogenesis scandal. Few will miss him when he's gone.

And the Piazza for Worst Position Player goes to...

Ruben Tejada! Ike Davis showed up to commemorate he and Tejada's respective seasons by letting a pop-up drop between them: 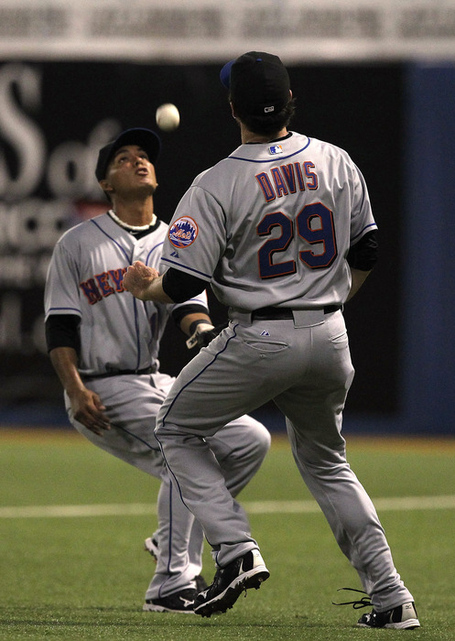