Trade rumors are swirling around Ike Davis and Lucas Duda. The Mets seem ready and willing to move one of their two left-handed first basemen. Which player should the Mets trade?

Jeff Wilpon was recently quoted as saying the Mets have a "glut" of first basemen. That quote requires about a dozen caveats but at its core is a factual statement. The Mets have both Lucas Duda and Ike Davis and their mutual presence on the Mets' roster is redundant. 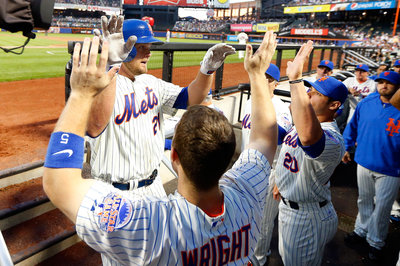 What was the market for Lucas Duda this past summer?

It's no secret that the Mets are shopping the two lumbering first basemen. Jon Heyman reported that as many as five teams had expressed interest in Davis. It's not so much a question of if Duda or Davis will be traded but when. The question then becomes, "Which player should the Mets trade?"

Earlier this year, a poll of nine anonymous scouts chose Duda over Davis. Duda posted a wRC+ of 120 in 2013 while Davis's wRC+ was just 90. When looking at just this past season—and considering the fact that Duda has an extra year of team control—it's clear Duda is the more valuable player.

However, when you look a bit further into the past, the picture becomes more muddled. Davis bounced back from a slow start in 2012 to hit 32 home runs. In an increasingly power-starved league, the fact that Davis has that potential makes him desirable. Contrast that with Duda, who has yet to have an ISO greater than .200 since his brief debut in 2010 and is also a year older than Davis. The Steamer projection system likes Davis slightly better than Duda, projecting a triple slash of 238/.341/.439 versus .237/.335/.405 for Duda.

A couple of months ago, Steve Staude posted an excellent article on Fangraphs about strikeout rates and why they correlate with power. The basic idea is that strikeouts and power are correlated, but not for the reasons you might think. A player who strikes out a lot doesn't get on base as much as a player who strikes out less frequently, so they need to add value in other areas. They remain in the majors despite their high strikeout rates because they have another tool, and that tool is usually the ability to hit home runs. This is especially necessary if you are at the bottom of the positional spectrum.