The veteran outfielder's game has changed a bit over the course of his career.

Share All sharing options for: Mets Analysis: Curtis Granderson's performance as a hitter, runner, and fielder

Last week, Sandy Alderson made the biggest free agent signing of his tenure as general manager of the Mets by signing Curtis Granderson. The left-handed-hitting outfielder spent the last four season with the Yankees after spending the several years with the Detroit Tigers, but he missed a lot of time last year because of a couple of freak injuries. He’ll turn 33 years old in March, which isn’t quite old by baseball standards but isn’t young. That’s not alarming, but Granderson’s age could be a factor on the back end of the four-year deal. That just about covers the basics, but let’s take a look at who Granderson is as a player.

Among the 96 outfielders with at least 1,000 plate appearances between 2011 and 2013, Granderson ranks 18dith a 126 wRC+. That was slightly behind Ben Zobrist and Jayson Werth, equal to Justin Upton, and a bit better than Hunter Pence, Josh Willingham, and Josh Hamilton. His 10.3 fWAR over that span ranks 20th, not far behind Carlos Gonzalez and Austin Jackson and just ahead of Josh Hamilton, Torii Hunter, and Carlos Beltran. And even after missing two-thirds of the 2013 season, Granderson’s 91 home runs rank 6th, just four behind the oft-injured but awfully impressive Giancarlo Stanton.

Heading into his age-33 season, it’s obviously no sure thing he’ll look as good among his peers as he has over the last three seasons, but a sharp and immediate decline seems unlikely. Two of those similar outfielders—Hunter and Beltran—were roughly the same age over those seasons as Granderson will be over the next few. And both represent the ideal, as neither player’s production has dipped much, if at all, with age.

While Granderson’s single-season hitting stats for 2013 look alarming, they represent just one-third of a season. Since becoming a regular, Granderson’s wRC+ had only been below 100 once, back in his rookie season, until his injury-shortened year. And focusing on a truncated season’s stats can make things seem more significant than they really are. After all, Ike Davis had a 153 wRC+ in 2011, but he did so in just 36 games. 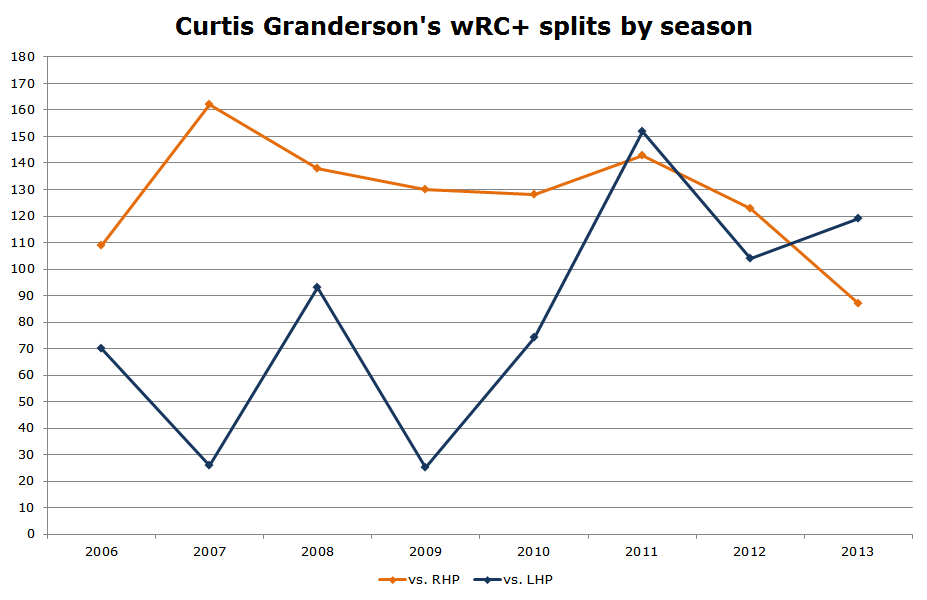 When looking at a player’s statistics, career numbers carry a ton of weight, but Granderson has shown signs of improvement against same-handed pitchers over the last three years. In his outstanding 2011 season, he hit better against lefties than righties, and in 2012, he was better than league average against lefties. In 2013, he hit better against lefties than righties again, but it was obviously in a small sample. What’s most concerning is that Granderson’s dominant performance against right-handed pitchers has been trending in the wrong direction for several years, even as he’s made strides against lefties.

Thanks to the excellent tools at Brooks Baseball, we can delve a little further into Granderson’s splits. Since power is undoubtedly his greatest asset as a hitter, here’s a rundown of how well he’s hit for power against left- and right-handed pitchers.

First, here are Granderson’s slugging splits for his career, excluding his rookie season because the data starts in 2007, by pitch location. Note that these charts are from the catcher’s point of view, and Granderson would be standing on the right side of home plate. His numbers against left-handed pitchers are on the left, against righties on the right. And finally, it’s worth mentioning that the gradients used in these charts are weighted relative to each individual chart. Feel free to click the image to embiggen. 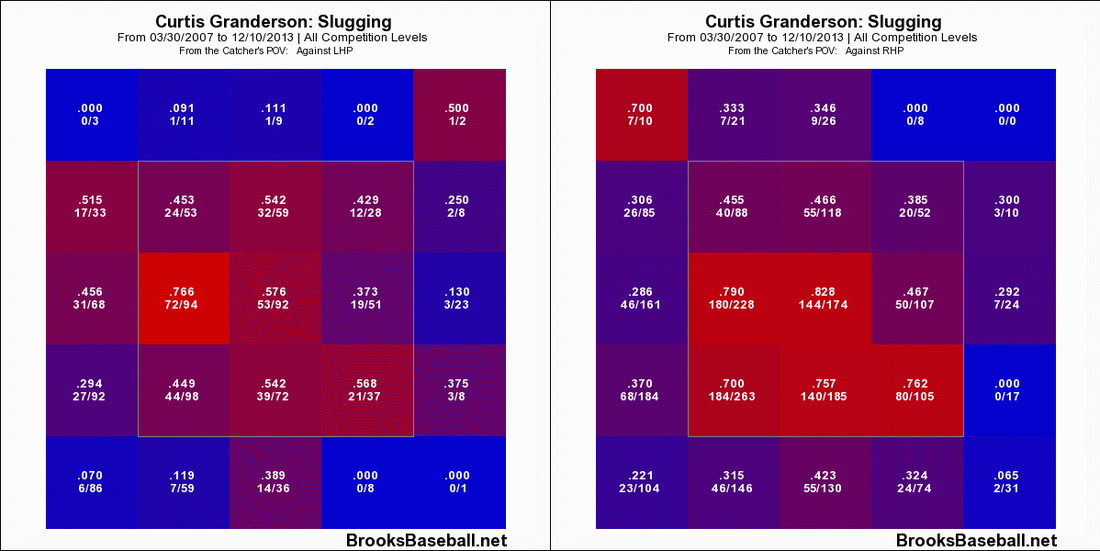 Granderson has dominated the strike zone against right-handed pitchers, and he hasn’t been a slouch against lefties, either, though his slugging percentage was highly concentrated in the middle of the outer third of the zone. 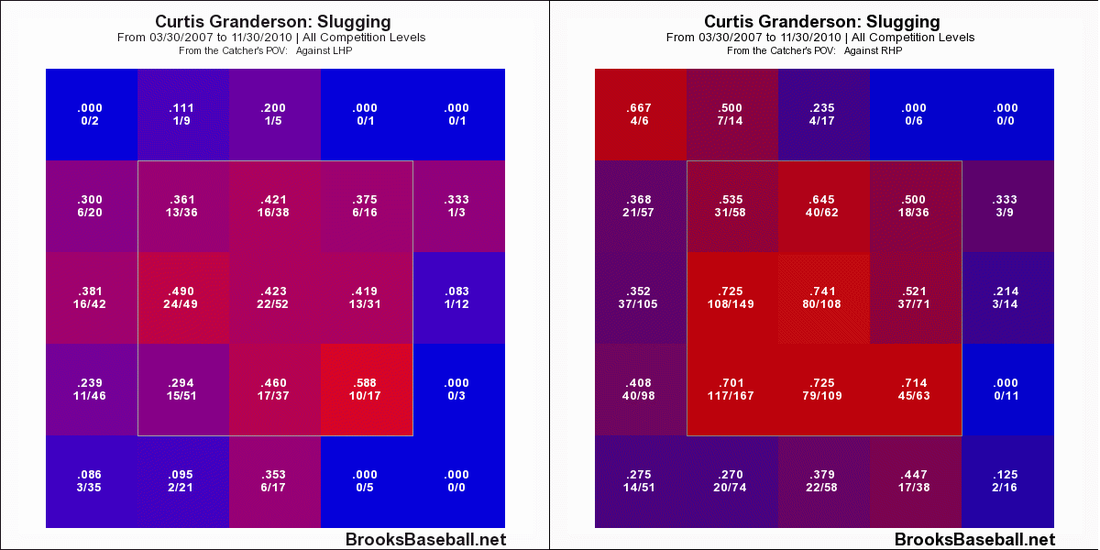 Over those four seasons, Granderson’s power against right-handed hitters was impressive throughout the zone. Against left-handed pitchers, his power was mostly confined to the low, inside corner of the zone, though even that .588 mark wasn’t elite by his standards.

And here’s how his slugging splits looked over the last three seasons. 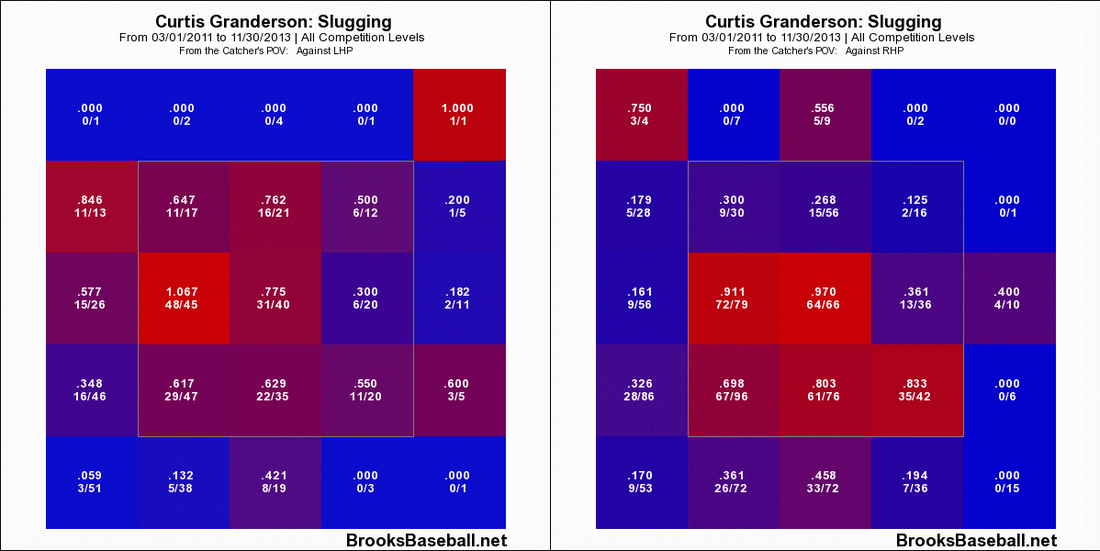 There’s been a major shift in Granderson’s hot zones for power as his splits changed. Against lefties, he’s still slugged nearly as well on pitches in the low, inside portion of the plate, but he’s really started to mash in the middle and outer thirds of the strike zone, especially on pitches in the middle or lower thirds of the zone. His 1.067 SLG here is more than double his .490 SLG in the previous chart.

There’s been a shift in his power hitting against righties, too, with much of his power concentrated in similar areas as it has been against same-handed pitchers. But he hasn’t hit for much power against pitches in the upper third of the zone against righties, and that’s something he had done quite well from 2007 through 2010. Granderson credited his massive shift in production against lefties to Yankees hitting coach Kevin Long, with whom he worked on "the fix" that altered his swing. Perhaps those changes in his swing are part of the reason he’s seen a decline against righties, but when it comes to hitting for power, he has not been susceptible to left-handed pitching ever since.

While Granderson hasn’t been a frequent or particularly efficient base-stealer, he’s been valuable as a baserunner. By BsR—Fangraphs’ baserunning runs above average—Granderson has been worth 27.6 runs over the course of his career. Over the last three seasons, his 9.7 BsR ranks 38th among the 226 hitters with at least 1,000 plate appearances. That doesn’t quite make him elite, but he’s been very well above average.

Granderson’s injuries last year were both the result of getting hit by a pitch. In spring training, he broke his forearm, and not long after his return from the disabled list in May, an errant pitch broke a bone in his hand. Aside from that nightmare of a season, though, one of Granderson’s assets has been his ability to stay on the field.

Between 2006, his first year as a regular major league player, and 2012, Granderson played in 153 games per season. He had a handful of minor injuries over that time, none of which were chronic or required surgery. Those injuries last year happened, of course, and brought that average down to 143 games played per season since 2006. But the long track record of good baseball health is an encouraging sign as he joins the Mets.

With Juan Lagares presumably patrolling center field for the Mets and Chris Young, who also has a reputation for great defense in center, Granderson seems destined for a corner. He’s spent the grand majority of his career playing center, where defensive metrics DRS and UZR/150 saw him a good defender at the position in every season except 2008 and 2012, though the latter was his worst year by both. And it's important to take his 2013 metrics with a grain of salt because of the extremely small sample, but they are included below. 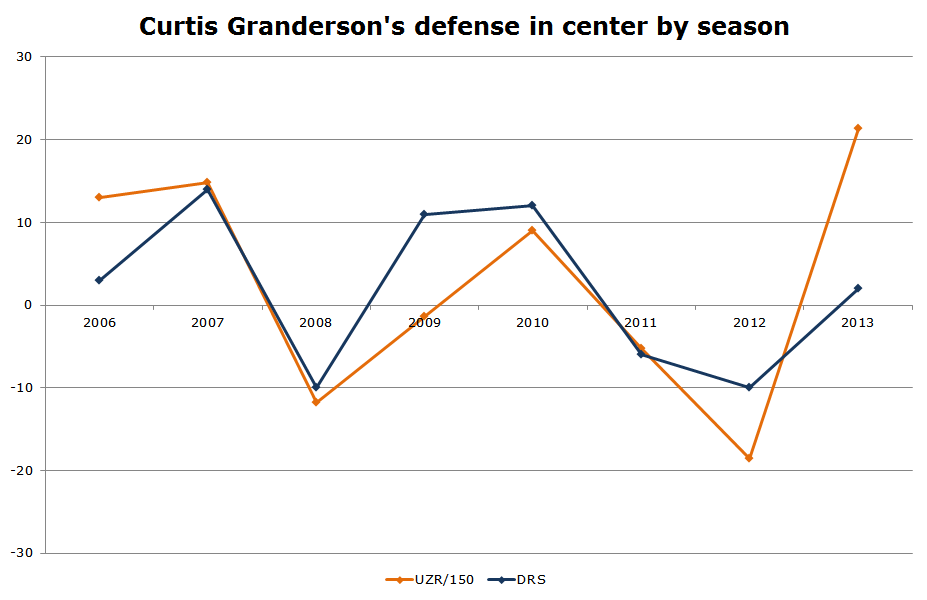 As for experience in the corners, Granderson doesn’t have much. With 9,579.2 innings in center field and just 245.1 innings between left field and right field combined, looking at his metrics in the corners is useless. The good news is that the move should help Granderson, whose poor year in center in 2012 might have been a statistical fluke. Even if that’s not the case, playing a corner is less demanding than playing center. If that can translate into even slightly above average defense in a corner, he should still provide the Mets with plenty of value.