Joe Smith, Jason Vargas, and lessons from the past

Two former Mets are on the open market. What lessons can we learn from their career paths?

Share All sharing options for: Joe Smith, Jason Vargas, and lessons from the past

Alleged deity Joe Smith and lefty workhorse Jason Vargas have both received sizable multi-year contracts this winter. Each pitcher is coming off of a respectable string of seasons that has made them both very desirable targets for teams looking to contend in the 2014 season, and both players were traded away by the Mets a few years ago for veteran reliever J.J. Putz.

In a vacuum, it's easy to see why this deal was considered a plus for the Mets. The team had just suffered their second straight major collapse, largely at the hands of an ailing bullpen that had lost Billy Wagner to Tommy John surgery. In Putz, they had acquired a proven relief ace at an affordable price without giving up any top prospects.

The results were about as negative as possible. Putz's struggles with injury and lack of command plagued him for all of 2009, leading to a year of below average performance and plenty of time chalked up on the disabled list before his option was declined and he went on to being a dominant reliever yet again with the White Sox. Smith and Vargas have excelled since leaving the Mets, combining for about 9 WAR since their departure. Even Mike Carp, who was also sent to the Mariners, has found himself to be a useful platoon player as well as the owner of a brand new World Series ring.

Of course, bad luck is to blame for some of this. None of Vargas, Smith, or Carp were especially highly touted, and J.J Putz has clearly been one of the top relievers of this generation, before and after the trade. Still, this trade and its results serve as a great reminder of how to appropriately build a pitching staff and the risks involved when dealing with the bullpen in particular. There are three rules-of-thumb that apply to this trade in particular:

Relief pitchers are volatile, and cannot be trusted.

There is a reason these pitchers aren't starters. Generally, relievers have fatal flaws that automatically put them a tier down from their starting counterparts and prevent them from pitching deep into games. J.J. Putz was no exception. His inability to throw a consistent breaking ball meant that he relied almost entirely on his fastball and split-change. He was also moved off of starting in the minor leagues due to durability concerns, which were reinforced by consistent elbow troubles during his tenure in Seattle. In his one year with the Mets, Putz saw a velocity decrease and also missed time due to a bad elbow, and his command troubles persisted. As a result, it was a lost season for both Putz and the Mets.

Young pitchers are valuable, and can sometimes make drastic improvements.

It became clear in Joe Smith's two seasons with the Mets that he was an effective reliever, but had severe trouble getting left handed hitters out. Because of this, he seemed destined to be a "righty specialist" for the rest of his career. This was, of course, until the 2011 season. In 2011, Smith turned a corner. He didn't change his release point, or his repertoire, but instead changed where he spotted his pitches. Below are to zone charts, the first representing Smith's fastball locations to left handed batters before and after the start of the 2011 season. 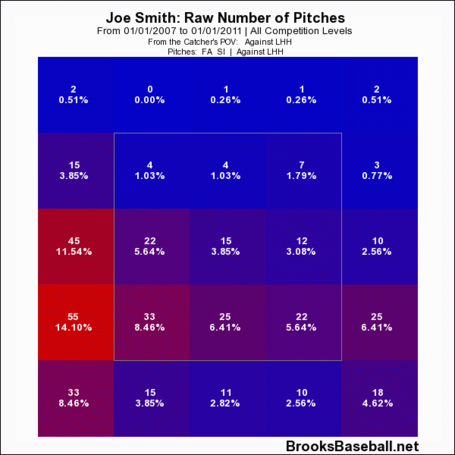 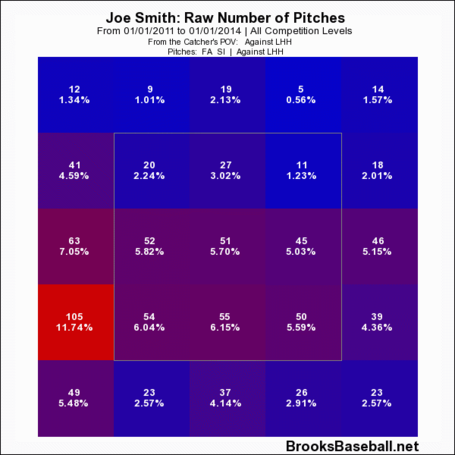 Until 2011, Smith predominantly handled left-handed hitters by pounding the low, outside edge to an extreme, and often missing. Lefties took note. Hitters would sit on the pitch and often take balls that were many inches off the plate, or they would crush it for an opposite field hit. In 2007, lefties hit for a .373 wOBA against Smith, a value that escalated as high as .428 in 2009, and continued to be .425 in 2010.

Since the 2011 season, however, Smith has spread his fastball locations around the zone to left-handed batters, and has nearly neutralized his platoon split entirely, and has proven to be a truly dominant bullpen arm over the past three seasons, with ERAs below 3.00 in each of them.

Jason Vargas also exemplifies this rule-of-thumb. There was little indication that Vargas was ever more than a filler arm during his limited time with the Mets. Still, when given an opportunity by the Mariners, Vargas has shown exemplary command of the strike zone and has become a very productive pitcher, with numbers that are reasonably comparable to former Met two starter Mike Pelfrey. Even if this is the best case scenario for Vargas, he likely would have been a more compelling option to make a few starts for the Mets than Tim Redding, who somehow managed to log over 100 innings with the club in 2009.

Both Putz and Vargas have given us insight as to what a player is capable of given some time to rehab an injury properly. At the time Vargas was traded to Seattle he had been rehabbing a torn labrum in his hip and had missed all of 2008. He had next-to-zero trade value and was likely a filler thrown in at the very last minute. Now, Vargas is arguably the most valuable piece moved in the deal, competing with Franklin Gutierrez and Putz himself, who also managed to bounce back after an injury-plagued 2009 season. The Mets could not have expected this sort of outcome from Vargas, but some sort of regression to the mean should have been expected. Considering Vargas missed all of 2008, any modicum of decent performance would have increased his value significantly, and selling low proved to be a poor decision, especially when his value was not necessarily low due to his on-field performance.

Joe Smith and Jason Vargas are in the midst of productive careers in the major leagues, and have proven to exceed even the most optimistic predictions for their careers. Still, trading them away for one year of a relief pitcher (in addition to spending a ton of money on Francisco Rodriguez) only augmented the lack of pitching depth the team has suffered in recent years. Sandy Alderson and Co. seem to have steered the team in the complete opposite direction with regard to building a pitching staff and minor league depth, and results are starting to pay off. Not trading away players that fit the same mold as Smith and Vargas did can allow the Mets to not have to pay free agent dollars for players like Smith and Vargas.