It’s no secret that the Mets entered the offseason hoping to upgrade at shortstop, and Stephen Drew, who is a left-handed hitter and will turn 31 in March, is still on the market. With few teams likely to be interested in signing Drew, there’s a chance his price tag will fall into the Mets’ budget. But how do he and incumbent shortstop Ruben Tejada compare?

Via Fangraphs, here’s how they compare over the course of their careers as hitters.

While Drew and Tejada are very similar in terms of on-base percentage, Drew’s average of 15 home runs per 650 plate appearances is far better than Tejada’s average of one. Drew certainly isn’t alone as a home run hitter at short, but there are not thirty such players in Major League Baseball, either. Power at shortstop is a big bonus. Tejada’s only significant advantage at the plate is that he’s struck out less frequently than Drew, but outs are outs, and those have come at roughly the same clip for both players.

Tejada actually swings at more pitches outside the strike zone than Drew—29.1 to 24.4 percent—but doesn’t cost himself too much by doing so because he makes contact with those pitches more often, too. As expected for a relatively low-strikeout hitter, Tejada makes contact more frequently than Drew overall, but Drew clearly has a leg up when it comes to the quality of that contact.

Both hitters have significant platoon splits over their careers, which suggests that Tejada might not be completely out of a job with the Mets if they bring Drew on board. Of course, left-handed hitters with big splits have an advantage, as left-handed pitched in just 28.7 percent of MLB plate appearances in the 2013 season.

Drew has an excellent reputation as a defender at shortstop. In their hot stove scouting report on Drew, Baseball Prospectus wrote:

Much of Drew’s value rests on his defense, as he is one of the better shortstops in the game on that side of the ball.

Stephen Drew should still be on the Mets' radar.

For what it’s worth, defensive metrics UZR/150 and Defensive Runs Saved (DRS) do not rate Drew nearly as well. While year-to-year variations in those numbers need to be taken with a grain of salt, both systems rated Drew’s defense very poorly in 2012. In total, he’s at 2 DRS and -3.3 UZR/150 for his career.

Tejada doesn’t have nearly as good a reputation as a defender, and the metrics are in line with that reputation. At -8 DRS and 0.8 UZR/150 over the last three seasons, Tejada has ranked as a below-average defender. He’s still just 24 years old, but he’s likely already established who he is as a defender.

There’s not much to see here. Drew has accumulated 40 stolen bases over eight years in the big leagues, but he’s been caught stealing 15 times and rates as a below-average baserunner by the BsR metric at Fangraphs. Tejada has 13 stolen bases and has been caught eight times, but he’s still slightly on the positive side in BsR. If he gave up attempting to steal bases, he might be able to improve his baserunning a little bit more.

In terms of overall value, Drew has had a few years pretty similar to Tejada’s 2011 and 2012 seasons. Each player has also had one -0.3 fWAR season within the last two years. But Drew has put together a couple of excellent seasons, and that’s where the appeal lies with him. Tejada has not shown he can be that valuable in a single season. 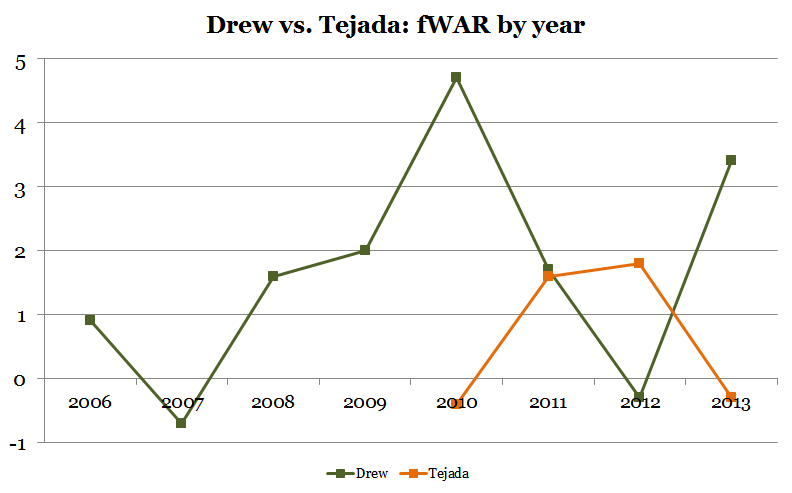 It’s worth remembering that Drew played in just 86 games in 2011 and 79 games in 2012. Tejada hasn’t been without injuries, either, though.

Looking ahead, the projection systems don’t see a huge advantage for Drew in 2014. Steamer and Oliver see him as a 2.0 and 1.9 fWAR player next year, respectively, while they peg Tejada at 1.6 and 1.1 fWAR. But if the Mets sign Drew to a two- or three-year deal, there’s a better shot that they’ll get more than one season of good production at shortstop—either by playing Drew every day or with a platoon—than if they move forward with only Tejada on the roster.