The Mets' Outfield: Young and Lagares and pray for Roger Maris

A look at the Mets' in-house outfield situation.

Share All sharing options for: The Mets' Outfield: Young and Lagares and pray for Roger Maris

With the Chris Young signing behind us and still a lot of offseason in front of us, it seems like as good of a time as any to take a closer look at the Mets' in-house outfield options. While Chris Young seems slated to start the season in left next to Juan Lagares, right field is a complete crapshoot at this point, and that might be an understatement. If only Ryan Braun were available, but I digress.

The best advice anyone could give a Mets fan regarding the outfield situation is to hope for the best but expect the worst. This, ironically, is a paraphrased line from the song "Forever Young," which not only happens to share a name with two Mets outfielders, but is also Eric Young Jr.'s walk-up music.

Plus fielding center fielders are always enjoyable, especially ones that couple that ability with a powerful throwing arm. Lagares's problems, though, reside in the batter's box. While he did show some improvement over the course of the season, Lagares is a free swinger without the greatest idea of what a ball or strike is.

Because of his speed and his propensity for hitting the ball on the ground, Lagares is more likely that the average player to post a high batting average on balls in play. Lagares' value today is solely sustained by his fielding prowess; he'll eventually need to become a more consistent player all around.

If Lagares is able to produce more power, limit his strikeouts, and walk more—or do a little of each—he would immediately become a more viable starter. The Mets could do worse than Lagares patrolling the outfield grass of Citi Field come April, but if he shows no marked improvement in the power department or in plate discipline, expect them to look elsewhere eventually.

Eric Young embodies the one-dimensional player moniker. He's below average in every facet of the game except baserunning. The worst part of it all is that he's not a plus fielder, which is counterintuitive considering his wheels. But Young's ineptitude at getting good jumps or running proper routes has led him to being just average in the field.

Inadequate bat speed manifests itself in an inclination for swinging through in-zone fastballs, which—coupled with an approach bereft of power—leaves him in a dire offensive situation. Young needs to properly identify pitches and sustain a higher level of plate discipline to make up for an insufficient hit tool. Given his positional flexibility and speed, Young best fits as a utility player providing a spark off the bench and coming in for some late-inning pinch-running and defense. Though one-dimensional, that one dimension has been sorely lacking from the Mets' most recent teams, and if the 2013 season was any proof, it can be useful when properly utilized. 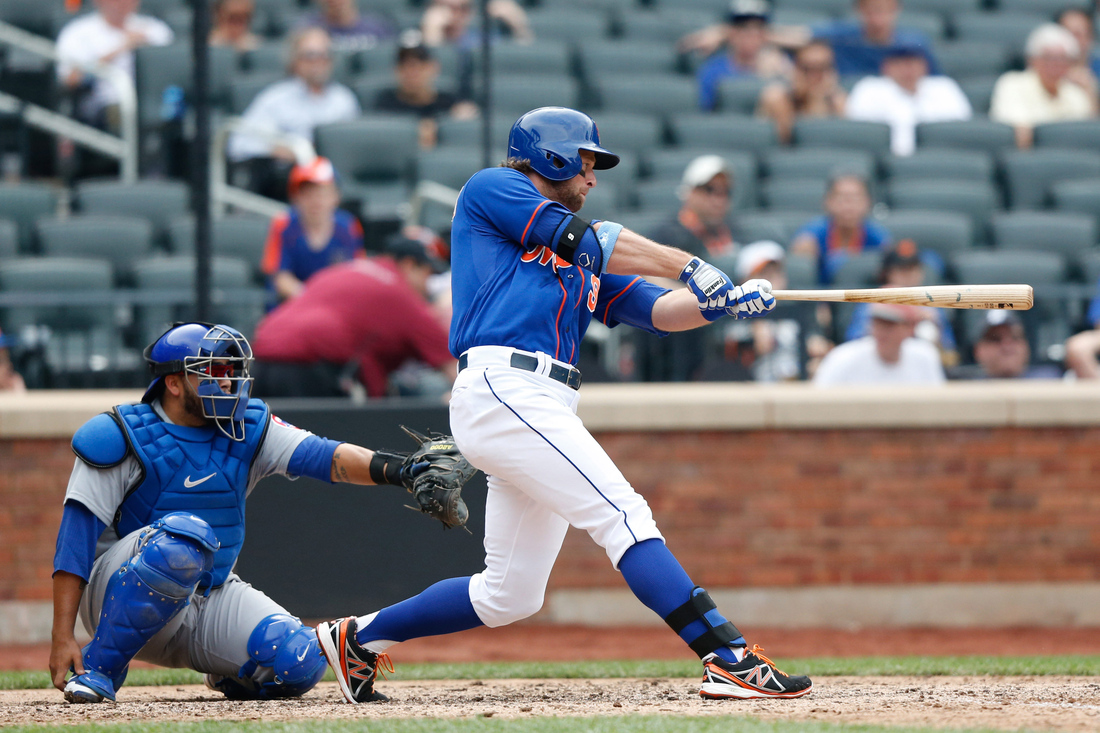 Once upon a time, the man Metstradamus called Cyborg was making flashy plays in center field, hitting over .300, and cracking the occasional dinger. Nowadays, it's hard to see how he fits on next year's Mets roster. Although the fall from grace was unfortunate for Mr. Nieuwenhuis, it could've been seen from miles away.

Nieuwenhuis, like most Minaya-era hitting prospects, pairs raw athleticism with extremely poor pitch recognition and plate approach. Nieuwenhuis specifically struggles laying off the low breaking ball, especially if it's inside, and the high fastball. As a result, Captain Kirk struggles mightily against southpaws. Expecting him to mature into anything greater than a respectable platoon partner would be a stretch.

The saving grace for Nieuwenhuis is that, aside from a proclivity to strike out, he isn't deficient in any other facet of the game. He dervies his value from a combination of solid fielding at a premium position, adequate power, and bat speed.

As the outfield goes, maybe only Chris Young carries as much thump in his bat as Andrew Brown. That being said, Brown has more in common with the group than you might expect. He, too, has a fairly large platoon split, poor contact ability, and has trouble catching up to a good fastball. While Brown walks more than a guy like den Dekker, he isn't anything more than average when it comes to bases on balls.

I haven't had a chance to properly analyze Brown's fielding. It's safe to say that he's league average as a corner outfielder, which frankly, isn't saying much. Brown could very well have an above-average major league season in him; he's going to be on the outside looking in when it comes to 25-man roster spots, especially if the Mets finally get some real outfielders.

Though den Dekker's supreme defensive abilities at a premium position afford him more room for error, his lack of offense has proven to be debilitating to this point. He has yet to show any semblance of major league hitting potential; his contact ability is poor, he has trouble hitting left handed pitching, he doesn't walk enough, and he has less power than Nieuwenhuis. Right now, den Dekker looks like nothing more than a glove-first backup outfielder. It might be presumptuous to assume that he could be an adequate platoon center fielder.

Conclusions, if there are any

With Chris Young in the fold and a good chance the Mets acquire another outfielder, Juan Lagares could end up being the only starter out of this bunch. The rest of them are players entering their primes with one plus tool yet cripplingly lacking in most other aspects of the game. And while having an outfield full of young player and players named Young makes for some good puns, it doesn't make a good outfield.

Lagares has the most potential, given his fielding prowess and his youth. Brown has power, Young has speed and den Dekker has the plus glove. If you could combine Young's baserunning with Brown's power, den Dekker's glove and Nieuwenhuis' hair, you'd still have a player bereft of plate discipline. But that player would still be a well above average player, probably similar to Carlos Gomez, the 2013 version and not the 2007 version and with great hair.

So maybe Sandy Alderson and crew are wasting valuable time and resources evaluating this offseason's crop of overvalued, 30-something year old outfielders and should instead be investing their assets into trying to genetically bond the four aforementioned player into one überplayer.

Barring any transactions, the 51s' outfield will consist of Cesar Puello, Dustin Lawley, Cory Vaughn, and Darrell Ceciliani. Vaughn is not that different than a right-handed version of Jordany Valdespin with a little more bat control and a little less attitude. Lawley finished this past season in Triple-A after cementing himself as a player that had no business being in the Florida State League. If Lawley, who has some pop, is able to use Vegas to his advantage, he could end up playing a sizable role for the 2014 Mets. Cecilani is the new Reese Havens, a player with a broad set of skills which has unfortunately eroded due to an unseemly number of injuries.

Arguably the most intriguing hitter in the Mets upper minors, and definitely the most newsworthy is Cesar Puello. He was in the midst of a genuine breakout season which ended prematurely due to his involvement in the Biogenesis scandal and subsequent 50 game suspension. Look for Puello to be in a similar position to that of Wilmer Flores this past season. Lightning quick wrists have led to solid contact ability and a plus power projection that he's just starting to tap into. Going forward, a plus-plus arm out in right field will ensure, at minimum, an average fielding performance. If Puello can continue his late season trend of drawing walks and limiting strikeouts, something he has not been able to reproduce in Winter Ball, he has the potential to be one of the more pleasant surprises of the upcoming season.

I had written this article prior to the non-tender deadline, and as everyone already knows Jordany Valdespin is no longer a Met. But, being a Jordany supporter myself and feeling that after watching him play for a couple seasons I have developed a grasp on who he is as a player, I've decided to include my analysis of him regardless.

After that more-than-bizarre "selfie" incident—who the hell wears a Marlins hat, anyways?—losing the still ongoing quest for viable outfield options last spring training, and putting up awful numbers at the major league level, Valdespin then had to call his manager something that would only make Barry Zuckerkorn proud. Oh, and he was also suspended for being a part of the Biogenesis scandal.

Even if Valdespin had been an average player last season, his off-the-field shenanigans would be enough to consider non-tendering JV1. The fact that the man has never performed at the major league level just made the decision all that easier. Without further adieu:

Definitely the toolsiest of the bunch, Valdespin still combines enough raw speed and power to make many scouts salivate. The problem for Jordany, in addition to occasionally flying off the handle, has always been a deep lack of understanding in regards to the broader points of plate discipline and pitch recognition.

Our own Rob Castellano chronicled Valdespin's supposed improvement in plate discipline over the course of last winter, but his improvement ended up being more farce than anything else. Valdespin failed utterly at the major league level in 2013, but he did manage to tear the cover off the ball for a short while in Las Vegas.

He can play all three outfield spots along with second base and shortstop on the rare occasion. Truth be told, Valdespin is severely rough around the edges and too old for us to still be dreaming on his raw tools ever materializing into a well above average player.