Is it possible to encapsulate such an interesting tenure in just a dozen quick bites? Yes, apparently it is.

Like it or not, Justin Turner has been a central character in the drama that has been Mets baseball since he began his tenure in orange and blue. In fact, despite often being cast in something of a secondary role few players have had a larger impact on the club since the start of Turner's big league career -- not including a couple of brief cups of coffee prior.

Here's a brief summary of the kind of impact Turner has had since 2011:

Certainly a bit slanted towards quantity over quality, but there's no doubting that he has made his mark on the Mets over the past few seasons. Has it always been a positive mark? No -- Turner also places very high on the list of total outs made and falls nowhere near the top of the list in WAR or OPS. But that's probably the best way to think about the Justin Turner era -- not overly outstanding, but definitely very notable.

So let us review some of the most memorable moments of note from the career of Justin Turner, Met:

Back on August 6th, 2011 Justin Turner homered twice in a game, the only time he has done so in his career. Hell, he's only hit four more in the 218 games since so this is certainly going to be one to tell the grandkids about. 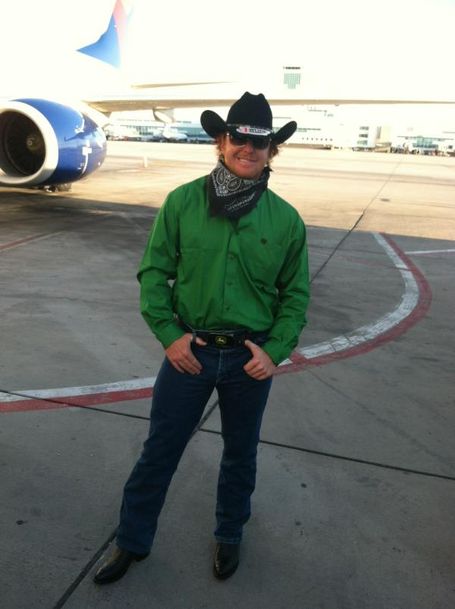 Remember that time Justin Turner took a hard forearm shiver from Andrew Brown? Not quite on the level of Ruben Tejada's season-ending broken leg, but it does make clear the fact that whomever the Mets acquire to play short for them next season will want to steer clear of the wrecking ball known as Andrew Brown.

No 'Best of Turner' list would be complete without mentioning his extended stint as the Mets very own pie man. It was a title held capably by guys like Willie Harris and Angel Pagan before him, and guys like John Buck certainly brought enthusiasm to the role. But it was Turner who perfected the art of the postgame pie (namely, he bought a can of Ready Whip instead of using shaving cream).

His highlights range from his very first pie, which ended up on the jacket of Kevin Burkhardt, to the somewhat controversial no-hitter pie (above). In any case, it should be interesting to see who takes the reins in 2014 but it's clear that he'll have some big shoes to fill.

Love it or hate it, doesn't really matter because we're all going to remember it. JT's use of 'Call Me Maybe' as his walk-up music was about as Justin Turner as it gets -- all at once polarizing, catchy, downright maddening.

True story: This free pass against Heath Bell in April of 2012 was one of the 20 most valuable walks in Mets history as measured by Win Probability Added -- the change in probability caused by a player's performance during the game (a change of +/- 1 indicates one win added or lost). In fact, only six walks in Mets history that did NOT end a game were more valuable. Then when you consider the length of the at bat as well as the fact that they won it on a Nieuwenhuis walk-off single two batters later and this one definitely deserves to go down in the annals.

Lest we forget, there was the 'accidental' helmet bounce of '13. Extraordinary. Although I can never watch this without wondering what would have happened if the helmet had landed perfectly on Omar Quintanilla's head? So close.

As measured by WPA this was simply the biggest hit of Justin's career, weighing in at a hefty .40 WPA on that one swing. Additionally, this also happened to be the highest WPA game of his career; at .585 he was responsible for more than half of that September 9th, 2011 4-3 Mets victory over the Cubs. And despite the fact that he eats clutch for breakfast, this happens to be the only walkoff hit of his career.

Sort of best hit ever, but not really

Similar to the walkoff hit above, this two-run, pinch hit double in the top of the ninth against Heath Bell back on May 13th, 2012 represents one of the weightiest hits of Turner's career. He actually tied the above mark with a .40 WPA mark. Unfortunately, it doesn't get the same amount of fanfare since he made the mistake of doing this on the road, which meant that Frank Francisco and Manny Acosta would get the opportunity to turn a two-run lead into a four-run defeat thanks to a soul-crushing walk-off grand slam off the bat of Giancarlo Stanton. In any case, Heath Bell doesn't like to see Justin Turner step into the batter's box (.333/.429/.500 in seven career plate appearances).

Don't sleep on the D

One of the stronger defensive plays that you're going to see Turner make-- and perhaps his only BBTN Web Gem -- this moment from August of 2011 was more indicative of the fact that while Turner certainly wasn't ever going to fit the bill as an everyday shortstop, he was more sure-handed than we often gave him credit for. JT could pick it a little bit.

Obviously we can't leave off the holiday card debacle masterpiece.

Finally, when we talk about Justin Turner's late-inning resume probably no moment is more symbolic of his unique tenure as a Met than his 13th-inning walk-off HBP back in June of 2011. In fact, once again measuring by WPA this was the second-most valuable HBP in team history, behind only Joe Torre's bases loaded, bottom of the ninth, two-out HBP in a 1-0 game back in 1976. Turner's feat was also only the second game-ending HBP in team history (Daryl Boston, 1992). Certainly looks as if he turned into the pitch; but like the 13-pitch walk up above that sort of speaks to Turner's hallmark as a guy that so often battled grinded grissioned his way through crucial at bats until he could eke out some sort of positive result.

So there you have it, the life and times of Justin Turner in Flushing. And who knows, perhaps Sandy (read, Terry) will effort to bring him back on a more team-friendly deal than what he was likely to make in arbitration this winter. Perhaps not.

In any event, for a pinch-hitting, backup infielder that Omar Minaya initially grabbed off of waivers from the Orioles back in 2010, it's been a heck of a ride.