The Mets have a new reliever in Brandon Lyon. Fresh off shoulder surgery, Lyon put up some of the best strikeout numbers of his career last season. Is any of it sustainable?

Brandon Lyon is a good reliever. Based on above-average control and average-ish ground-ball rates, he's kept his ERA respectable most years and been a positive contributor to all of his teams. Maybe he wasn't worth that three-year contract in Houston, but that's just because he doesn't add the strikeouts you want to see from a late-game reliever.

Or so we thought. Rob Castellano pointed out a little statistical anomaly in Lyon's recent record: 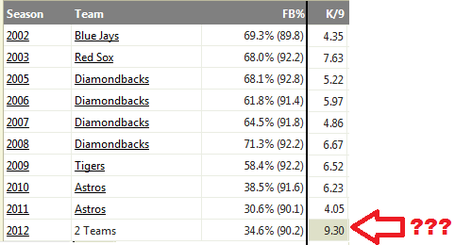 We had 586 innings of sub-par strikeout rates before last season, but it's still worth scratching our heads over those last 61 innings of whiffitude. Where did the new strikeouts come from?

If you look at his overall pitching mix, it's not clear if anything changed. His cutter used to be called a slider, and if you go back five years, he's been around 70% with those two pitches combined. Last year, he threw 71.8% cutters and fastballs. The year before, it was 70.2%. It doesn't seem likely that throwing one more fastball or cutter in every 100 pitches would produce a career-high in strikeouts.

Lyon's best secondary pitch is his curveball. That percentage has oscillated some -- from a career low of 13.1% in 2010 to 25.5% in 2012 -- but it's usually around 20-25% most years. At first glance, the change does not seem to have come from his curveball usage. I asked Garik16 about the curveball, and he said that the pitch had the same velocity before and after Lyon's shoulder surgery in 2011, and that the vertical movement was unchanged. The horizontal movement on the pitch changed some, but only about an inch, and that was probably in the margin of error.

The fact remains that, if Lyon achieved more whiffs, it probably didn't come from his fastball and cutter. There had to be something in the curve. Finally it was J.P Breen, writing at RotoGraphs, who pointed out the following about the curve:

Opposing hitters swung and missed at a Lyon hook 21.4% of the time. That’s the highest swinging-strike rate on his curveball since FanGraphs started logging PITCHf/x data in 2007.

Brandon Lyon may have done so without changing the movement on the pitch much, but he still got more whiffs from his curveball after his shoulder surgery.

Maybe the difference was based on usage. Garik16 found that Lyon threw the ball more on counts with two strikes in 2012 -- and that he significantly increased the amount he used the curveball against lefties last season, too (13% to 27%). Lyon is using the pitch more often in counts in which the batters are less selective, and he's throwing the pitch to lefties more often. Somehow that meant more whiffs from the same pitch.

Now here's a strange thing about sliders and curveballs -- the more side-to-side movement they have, the more of a platoon split the pitches show. It's an intuitive thing -- the sweeping slider of a LOOGY versus a crisp overhand hammer not only feel like very different pitches, they act like them. The more a ball moves right-to-left for a righty, the more likely it is to break into the barrel of the bat for an opposite-handed batter. So Lyon is "only" showing 1.2 inches less horizontal movement on his post-surgery curve ball -- maybe that means nothing, or maybe it means that lefties are having a harder time with the pitch now.

Ask a former collegiate or pro pitcher, and he'll tell you about the link between the curveball and the shoulder. Try throwing a curveball and you might even feel it across your upper back. If a slider leads to more Tommy John surgeries because of the snap in the release, there's at least some evidence that the curveball could lead to more injuries because of the strain from coming over the top. If Lyon was feeling pain in his shoulder when he threw his curve way back in 2010, it might make sense that he threw a career-low number of curveballs that year.

And though the movement on the pitch might not be affected, his usage of the pitch certainly has changed. Maybe the surgery allowed him to have confidence in his best breaking pitch again. Maybe it just doesn't hurt as much to throw. Either way, these changes seem sustainable, at least until his shoulder starts barking again.

It's usually a bad idea to bet against the larger sample. And that's why the Mets paid Lyon less than a million in base salary for his work -- if he turns into the old Brandon Lyon, he can help the middle of the pen. But the Mets also provided $1.65 million in incentives. The kind of incentives Lyon could earn if he continues to spin his curveball out there for strike three.