The pitcher with the best K/BB ratio in Mets history was by turns frustrating and spectacular.

Share All sharing options for: The Top 50 Mets Of All Time: #38 Bret Saberhagen

When an 18-year-old Bret Saberhagen reported to Royals camp, deeply tanned in flip-flops, a flowered shirt, and white-rimmed sunglasses, pitcher Mark Gubicza was “stunned.” “I thought, ‘Who is this guy?’ Those kids from Fast Times at Ridgemont High really do exist.’”

California’s high school player of the year, Saberhagen pitched a no-hitter at Dodger Stadium to clinch the city title. Before turning 20, he took up temporary quarters in George Brett’s house, stole Brett’s coonskin cap for luck, and threw his first major league game. By his second season, the 21-year-old was a 20-game winner. By 25, he had two Cy Young awards and recorded a 180 ERA+. At 27, his closest comparable player was Greg Maddox, and the lanky righty seemed to be flip-flopping his way to Cooperstown. This is the pitcher who came to the Mets in 1992. 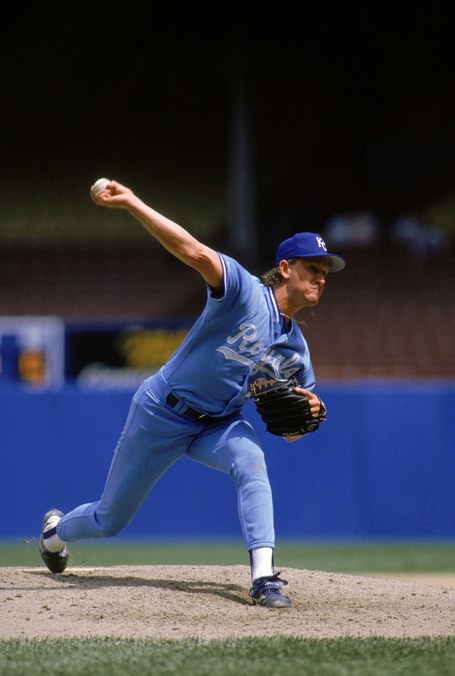 Saberhagen threw a 94 MPH fastball, a strong changeup, a hard slider, and what a manager once called “the curveball of a lifetime,” which he’d been perfecting since elementary school. “It’s always been a riot to throw that pitch,” he said. Some were reminded of Tom Seaver’s curve.

John Franco would say that Sabes still had “the hardest throw I’ve ever seen” — and that was in his eleventh year in the league. But navigating through various ailments, sometimes the slider would go, and sometimes the curve, and sometimes the two would smoosh together clumsily. When right, Saberhagen was maybe the least clumsy pitcher in the game.

In December of 1991, the Mets acquired Saberhagen for Gregg Jefferies, Kevin McReynolds, and Keith Miller, three regulars for the past year’s club. (In a fun coincidence, Bill Pecota came over with Saberhagen, though the latter bears no relation to the metrics.) The Mets were making a run, signing free agents Bobby Bonilla, Eddie Murray, and Willie Randolph. With Frank Viola recently departed, they looked to add a big pitcher and got their mark. Mets GM Al Harazin was “elated:” “To have Dwight Gooden and Bret Saberhagen on the same staff, it doesn’t happen in this world.”

In fact the world allowed it, but on its own cruel terms. The expensive new Mets lost 90 games and inspired Bob Klapisch’s book-length screed, The Worst Team Money Could Buy. Saberhagen pitched solidly — when he pitched. For much of mid-summer he was out with an inflamed finger, a niggling injury that recurred in August and prevented him from throwing even 100 innings. In 15 starts, he struck out 81 and walked 27, good for a 2.88 FIP and 2.1 fWAR. The “good” news was that Sabes had a strange habit of appearing human in even years and unhittable in odd. Hello, 1993.

If the ‘93 Mets proved anything, though, it was that Bob Klapisch was wrong and Shakespeare was right: “The worst is not, so long as we can say, ‘This is the worst.’” Along with 103 games, the even more miserable team lost the support of fans as they careened toward their worst finish since the Gil Hodges hire, becoming “one of the most incompetent and unpleasant teams ever to perform in New York” (the Times). 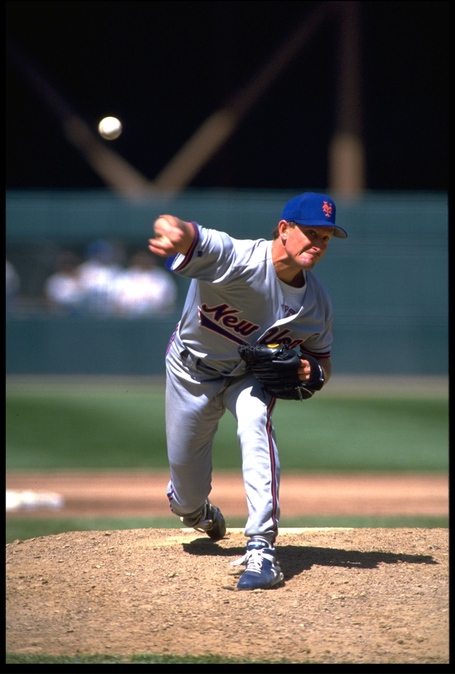 Saberhagen, though, was upbeat. “Why grow up?” he asked a reporter. “This is supposed to be fun. You get dirty and play in dirt.” After a 2–0 loss, he removed a firecracker from his secret stash, lit it, and threw it near reporters. When they got angry, he bristled: “If the reporters can’t take it, forget them.” Weeks later, he filled a squirt gun with bleach and sprayed three reporters conducting a locker room interview. Belatedly, he copped to the prank and said he meant only to “paint” a Mets employee’s jeans but had lost control — not hard to do with a Super Soaker. It was literally childish behavior and no one was prepared to laugh, especially since Sabes hadn’t lived up to his odd-year promise. Actually, he was quite solid on the mound, pitching to a 122 ERA+ while walking barely a batter per nine innings. But the day before confessing, he underwent arthroscopic surgery on his left knee. Later, it was elbow surgery.

A not-totally-chastened Saberhagen (“I’ve been to the principal’s office quite a bit. Fortunately, I haven’t been to the dean’s office yet. That’s a higher authority.”) entered the 1994 season as a fifth starter. The Mets had shopped him in the offseason, but with three years and $15 million left on his contract, they couldn’t find a taker. They were stuck with a frail arm attached to an irritating smile. Then, Bret Saberhagen threw one of the best-pitched Mets seasons since the age of Seaver.

Sabes’s first effort in 1994 was a five-hit, walkless complete game. Shortly after turning thirty, he completed his second start with two walks — and that was his wildest game of the season.

If you’re offended by pornography, please look away.

While striking out 7.3 men per nine innings over the season, Saberhagen walked zero batters in 13 starts, one batter in nine starts, two batters in two starts… and that was it. In the strike-shortened season, he had more wins (14) than walks (13), and put up a major league record K/BB ratio of 11. To put that in perspective, there is a similar ratio between Mets seasons and Mets World Series appearances. 696 hitters came to the plate against Saberhagen, six saw the count run 3–0, and only one of these drew a walk. And in 177 innings, only 54 earned runs scored, good for a 155 ERA+. It was simply one of the freakiest performances in baseball history, cut off abruptly at its apex. For a monument to his control, scan the box score for July 15, a pitcher’s duel for the ages.

“I truly believed if I was healthy, I could show New York that I could throw the way I had been capable of in the past,” he said. You might say he cranked the K/BB ratio up to 11.

"I truly believed if I was healthy, I could show New York that I could throw the way I had been capable of in the past."

Saberhagen would never again reach that summit. Somehow the catcher’s mitt stopped seeming three feet away. Which is not to say he was quite spent. He made 16 starts for the ‘95 Mets, put up a 3.35 ERA, and was worth almost two wins in half a season. On July 31, the Mets played him dirty by trading him to pre-humidor Colorado, with minor leaguer David Swanson, for Juan Acevedo and minor leaguer Arnold Gooch. He lost all of ‘96 and most of ‘97 to injury, put up good numbers in ‘98 for Boston, pitched well but less often the next season, then broke down in 2000 and had his swan song in the new millenium. With 56 bWAR to his name, 70% collected by age 27, Bret Saberhagen didn’t find his way to Cooperstown after all.

So how does one defend the top 50 pick of a pitcher who performed haltingly on such bad teams? First, unpoetically: the man made 76 starts for the Mets and walked 77 batters; his 5.04 K/BB ratio with the Mets is best by a full integer. He had three useful if unhealthy years and one spectacular season, which adds up to more than 11 wins. He set a record as a Met that will probably endure a very long time. And he apologized about the bleach.

But you can also get wistful about Bret the Met. He was, if you’ll allow it, the temperamental Jaguar convertible that guys like us don’t usually drive. Lots of times he broke down. Sometimes we felt like ostentatious jerks behind the wheel. But that one time, when we had him out on the open highway, and he was really going, man, I mean going, and the wind was blowing out our flowered shirts, and the sun was shining through our white-rimmed sunglasses, and our flip-flops were pressed to the metal, and we cranked that radio up to 11…