When I think about some of the pushback following the 2013 AA top 50 prospect rankings, probably the most unified message was that about Steven Matz. Many people felt that at no. 37 Matz was being short-changed, especially after a debut season where he showcased special stuff from the left side while posting a 1.55 ERA.

However, my message remains the same: As much as we all naturally want to, it's important not to downplay the injury factor -- which is very easy to do if you don't quite understand the implications of being injured. On that note I'll call attention to a very telling snippet from a recent article titled 'What Really Predicts Pitcher Injuries' by Russell Carleton over at Baseball Prospectus:

"It's clear that the biggest risk factor for injury is previous injury. How big? Turns out the answer is "very."

In short, when you get hurt, percentages dictate that you're basically showing a proclivity to continue to get hurt down the road. For our purposes, when a kid like Steven Matz is continually nursing arm injuries from age 18 forward, that's not a good sign for his future chances -- lights-out stuff or not. Obviously we can't say he won't emerge from all this and have an impactful big league career (in fact early reports from camp are positive so far). However, we can say that if he does he would be a statistical outlier. 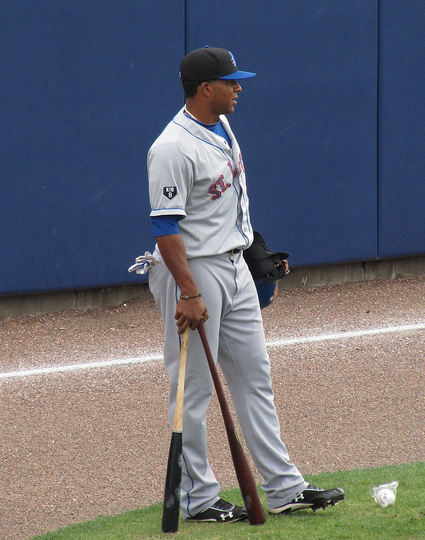 According to Adam Rubin, when asked about the reports Puello avoided questions stating, "All the questions [should] go to the players' association. I'm here for baseball. And we can talk about baseball. I've got to go work." (Photo courtesy of Bryan Green)

If you haven't heard, Mets outfield prospect Cesar Puello was recently linked to the growing Biogenesis-PEDs scandal. Documents recovered from the South Florida clinic named the 21-year-old minor leaguer among five more players -- including former Mets top prospect Fernando Martinez -- who received performance-enhancing drugs from the facility. Obviously this evidence is speculative at best so we shouldn't necessarily consider Puello guilty; it's just not the kind of buzz you want to hear about any of your players, especially not one on the 40-man roster.

Again, obviously not the best news, but in terms of his chances to make an impact at the major league level, Puello has much bigger fish to fry. Namely, the fact that he's just not that strong a very hitter. In dropping him down to the 27th spot in this season's prospect rankings I stated:

...(Puello's) walk rate dropped to a career-low 2.8% while the strikeouts jumped to an alarming 23%. Despite excellent all-around tools, Puello does not have the kind of hit tool to absorb such a glaring deficiency -- which means he'll have to make enormous strides if we're ever to believe he can have prolonged success in Double-A, let alone the majors.

Not to mention the growing injury concerns over the past two seasons. Obviously this news is something that definitely hits the radar, but we already had plenty of other reasons to worry about the Dominican outfielder's long-term value proposition.

The 22-year-old Montero has certainly been the shiny, new toy in camp thus far. Numerous outlets have suddenly taken note of the diminutive righty with the impressive power repertoire:

And all for good reason. As Jon Heyman summed up very simply, despite his 6", 170 lbs frame Montero possesses an electric heater that flashes 95 MPH, a highly developed secondary repertoire, and best of all the ability to put all of it exactly where he wants. He's the rare combo of plus command and stuff that immediately lets you dream of an impact starter in a big league rotation.

Since 1980 only nine pitchers of Montero's measurements have posted a 2.0 WAR season or higher.

However, before this bandwagon gets too crowded let's keep in mind the very important fact that successful right-handed starters this size just don't come around very often. In fact, since 1980 only nine pitchers of Montero's measurements have posted a 2.0 WAR season or higher. Next important fact, nearly 70% of those seasons were posted by inner circle Hall of Famers Pedro Martinez and Greg Maddux. And as much as people seem to like to throw around Pedro comps on Montero, I've found there's quite a low hit rate comparing anyone to Pedro (or Maddux for that matter).

But don't despair. Another notable name that appears on that least multiple times is Tom Gordon. He's no Pedro, but the 21-year big league run and career 32.5 WAR aren't too shabby. Gordon's is a profile that I would feel much more comfortable projecting on the young Montero -- not necessarily in terms of the repertoire, but his usage. For the first phase of Gordon's career he was mostly a starting pitcher; however as he began to physically succumb to the workload his career re-ignited as a lights-out closer and setup man.

In the top 50 rankings I placed Montero eighth overall, stating that 'while (Montero) may not profile as a future ace, I fully expect that he'll continue having success as a starter all the way up the chain.' And despite the concerns over his stature/long-term durability, I stand by that statement. I do believe he will have success as a starter for the Mets. However, let's don't start comparing him to the all-time greats before he's out of A-ball.

For more on Montero, Matz, and all of the Mets top prospects keep an eye on Chris McShane's excellent Spring Training coverage!