This Week in Baseball Season One Recaps: Episode 10

In TWIB '77 episode 10, Mel Allen digs public art, the Cubs and Reds crazy-battle, and scoreboards have been programmed to feel pain!

Share All sharing options for: This Week in Baseball Season One Recaps: Episode 10

Episode 10 of This Week in Baseball (covering the week of August 2, 1977) starts with a shot of what Mel Allen calls "The Big Bat," a piece of public art recently erected in Chicago. Its real name is the "Batcolumn" and it was designed by Claes Oldenberg, who intended it as a monument to "both baseball and to the construction industry." It is a somewhat curious choice for a TWIB opener, since the show usually doesn't get so artsy. However, the sculpture is located on Madison, the city's unofficial north/south divider, and so in location and form serves as a perfect segue into the surprising Chicago teams of 1977. 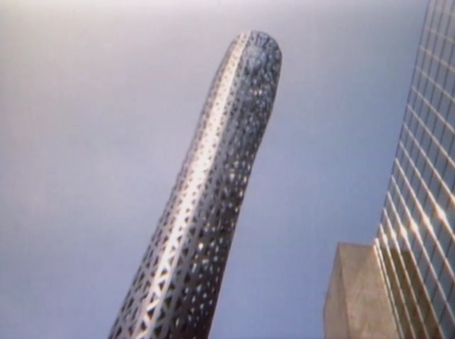 First, the south side "White Sox games are pure action," Mel Allen informs us breathlessly, "fast and furious, hot and heavy!" Whoah, Nellie! Mel, do you need a moment to collect yourself? Hyperbole aside, it is true that the White Sox remain hot and remain and in first place, to the shock of nearly everyone, even following a four game set against the Royals. After the ChiSox club their way to wins in first two games, the Comiskey Park crowd chants "Na na na na, hey hey hey, goodbye." We even get a shot of White Sox GM Bill Veeck joining in on the mockery. So among Veeck's many innovations in the game of baseball: fans being complete jerks.

In the third game, the Royals score twice in the top of the 10th to go ahead, but the White Sox storm right back with a game-tying two-run homer from Chet Lemon. This, according to Allen, "has the whole crowd doing the Chicago stomp!" Based on this footage, if the Chicago Stomp is shirtless and half-shirtless dudes in bucket hats jumping up and down, then yes, it does. The Sox win shortly thereafter, and though they drop the fourth game, they still extend their lead in the AL West to a whopping 5 games.

After another shot of "The Big Bat," we turn to the north side and a segment on the Cubs. Per TWIB custom, every trip to Wrigley Field is scored with old timey ragtime. The Cubs also maintain a lead in their division, though theirs stands at a slimmer 1.5 games, but the main reason for this segment is to highlight a crazy slugfest against the Reds, "a bizarre epic rfom start to finish" in Allen's description. The contest was started by a Reds reliever (Dale Murray) for some reason, was ended by a starter (Chicago's Paul Reuschel), and "in between the two teams played good old fashioned baseball." In Allen's estimation, this means 43 hits, 31 runs, 11 HRs, none of which sounds old fashioned or good to my ears.

Among the many crazy scenes from this game, we are treated to Chicago first baseman Bill Buckner making amazing diving catch at first, then racing to first on a bum ankle to beat Joe Morgan to the bag. The umpire thought Buckner won the race, anyway, though replay shows Morgan got to the bag a hair ahead of his pursuer. Reds skipper Sparky Anderson argues the call but but is allowed to stay. Cubs manager Herman Franks, on the other hand, gets ejected after having a very heated argument with the umps on a matter TWIB does not see fit to share with us. "Stay with em Herman!" Allen yells, fomenting overt insurrection against the arbiters. I never knew Mel Allen was such a rabble rouser!

Without their manager and running out of players, the Cubs are forced to improvise defensively, a lot. (Check out this box score to get an idea of the dizzying array of positional changes.) Jose Cardenal is asked to play second and does so, poorly, as he boots a routine grounder. With that experiment failed, Bobby Murcer takes the position in Cardenal's place and does slightly better, though he too is shuttled from one position to another 10 times. The Cubs are also aided by the return of Bruce Sutter, who takes the mound once more after what Allen calls "a 12 day injury." Serious enough to sit for 12 days but not serious enough to go on the DL? That sounds like it will be great for his arm and future conditioning, 1977! Regardless, Sutter holds Reds scoreless in 9th, 10th, and 11th.

The Reds go ahead on a botched grounder by Dave Rosello in the top of the 12th, but the Cubs tie the score at 15 (!) in the bottom half on a homer by George Mitterwall, prompting a joyous, shirt-free crowd to rain makeshift confetti on the field. In the bottom of the 13th, reliever-for-a-day Paul Reuschel gets a two out single, followed by another from Steve Ontiveros. Then, Rosello makes up for his error by hitting his own single and driving in the winning run. Reuschel comes rumbling home with arms raised and gut preceding him, and the Cubs win the damn thing, 16-15. 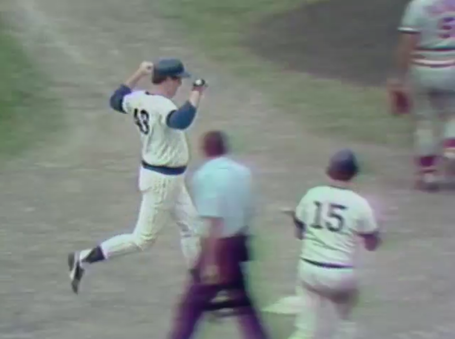 Our attention turns to the AL East, and another surprise team, the Baltimore Orioles. Interviewed before the All Star Game, Ken Singleton describes their fortunes thusly:

Well I looked in the paper this morning and the Orioles are still number one here at the All Star Break, and if we can keep it up for the rest of the season I’m sure the people of Baltimore and the fans of Baltimore will be very happy. I know we’ve surprised a lot of people this year, but I think they're getting to realize we’ve got a pretty good ballclub and we’re gonna have to be contended with for the rest of the season

Allen celebrates Singleton for homering into the centerfield batters' eye at Yankee Stadium, "a feat last accomplished by Mickey Mantle 13 years ago." Technically true, although when The Mick did it, center field at Yankee Stadium was a good 40 feet deeper. But hey, good job anyway, Ken!

Allen also sings the praises of the rookie-heavy O's, including a precocious "Yankee killer," 21-year-old Eddie Murray. "He started switch hitting a year ago. Boy, does he learn fast." Singleton adds that Baltimore is "playing with no pressure" because no one expected anything of them. "We’re Earl Weaver’s misfits," he concludes.

Despite the TWIB love, Baltimore blows a lead in the first game of their set in the Bronx when Elliott Johnson hits a 2-run game tying home run in the 9th. The Yanks go on to win it on a walkoff Reggie Jackson homer in the 10th, and take two out of three in the series. Even so, Baltimore remains in first place, 1.5 ahead of New York and tied with Boston, who just swept a series from the Angels in Anaheim.

After a break, TWIB gives some love to Braves slugger Jeff Burroghs' powerful first half, as he belted 3 homers this week to keep his edge in the NL homer race. But the real focus of this segment is knuckler Phil Neikro, who’s back in top form this year. Neikro lost the first 7 decisions of the year, which may been more the fault of his dreadful supporting cast, but he has recovered from that "shaky" start and currently leads NL in Ks. When Neikro is on his game, he can be tough to hit, or catch, as we get a shot of the Braves catcher’s Buick-sized glove. "That one could stop watermelons!" Allen chuckles, although it still isn't big enough to prevent a the wild pitches we see in this segment. 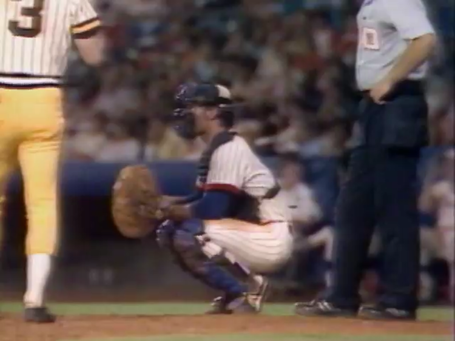 We also see a few highlights from MLB’s first Pitch, Hit and Run competition at Yankees Stadium, "sponsored by the Thom McAn shoe company!" Thom McAn gets a lot of love from TWIB. Too much, maybe, as during the on-field ceremony honoring the winners of the competition, shoe executives receive as much camera times as the kids who triumphed. We also observe how far television technology has come, as we spot one cameraman on the field sporting a remote backpack the size of a bank vault. 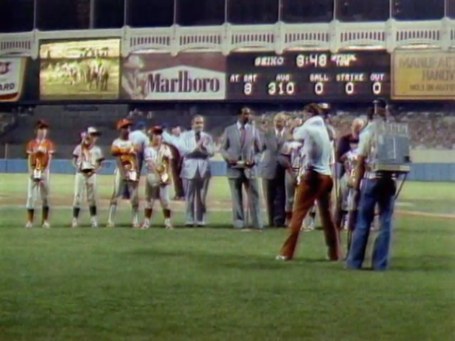 In this week's "weird" segment, this program toots its own horn by showing footage from the Kingdome, where A’s are taking fielding practice but are distracted by TWIB being shown on Jumbotron. It is only practice, after all. Allen Iverson would sympathize. Meanwhile, at Busch Stadium, different kind of distractions are at work when the Cardinals' third baseman runs for a pop fly and almost crashes into a ball girl. There seems to be a "meet cute" spark here, if I do say so myself. "Well, your father and I met when tried to catch foul ball and nearly killed me in the process." 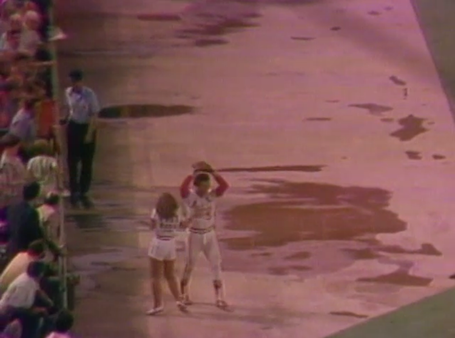 Back east the Vet, a line drive foul flies into the stands above the first base line and lodges into an auxiliary scoreboard, wedged between light bulbs. The scoreboard responds with a sad OUCH. What TWIB doesn't show you is that later the same scoreboard displayed WHY, WHY WAS I PROGRAMMED TO FEEL PAIN? 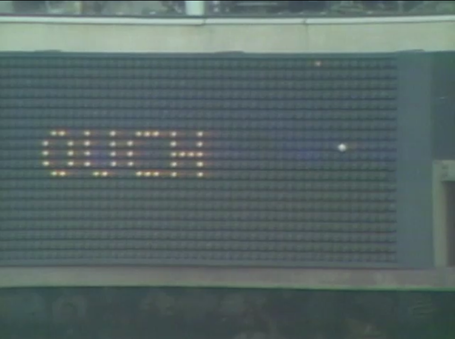 From the same game, Jay Johnstone of the Phils fields a single to right field and fires a wild throw in to try and catch the runner at third, but throw is too high. The third baseman then tries to nail the trailing runner at second, but the ball sails back into outfield. So Johnstone fields it again and this time he nails the runner who tried to score from third on the error. Hooray, I geuss?

In other Bad Decisions in Baserunning, Carlton Fisk slides face first into 1B to try and beat a shovel throw in a game at Comiskey. This was unwise for several reasons, not the least of which is that Carlton Fisk should realize his ability to maximize his speed is severely limited by being Carlton Fisk.

There is a dearth of good plays this week, but we do get to see Bobby Bonds of the Angels makes a great sliding catch in foul territory in Anaheim. We also see Lee Mazzilli of the Mets make a great running catch and crash into the center field fence of an unidentifiable stadium (the Mets are in away in unis). Based on the way the fence sways and buckles under Maz's weight, I'm guessing the thing is made of oaktag. 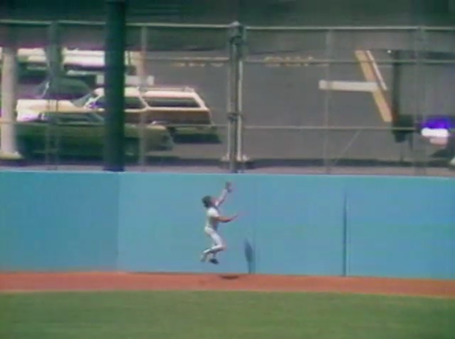 This week's Gillette Special goes to Eric Soderholme of White Sox. After missing all of 1976 with a leg injury, he's come storming back this season, and propelled Chicago to a big win against the Royals with a three-run homer. According to Allen, Soderholme "has proved to be some kind of bargain. He got 5 homers in 9 days to keep the Sox on a spree!" After his big dinger at Comiskey, he takes curtain call. Asking players take curtain calls from the dugout was another Veeck innovation. However, his idea to have them belt out selections from "Annie Get Your Gun" while doing so did not catch on. 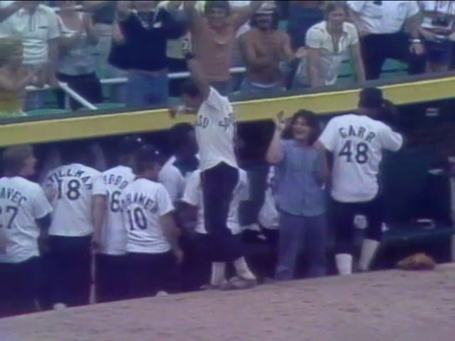