The erstwhile Braves third baseman may be gone, but that hasn't stopped him from trolling Mets fans.

As you may have heard a few weeks back from Baseball Nation's Grant Brisbee, Chipper Jones is throwing a killer Super Bowl Tailgate bash at the 'world famous' Allegro Bistro down in New Orleans. As of this writing, we're t-minus three hours and fifty minutes from launch.

Typically, this news would generate whatever the next lowest option below a shrug is on the apathy meter. Don't care about the Super Bowl much, nor do I care about the retirement activities of Chipper Jones. However, the reason I care about this is because -- quite randomly -- one of the first celebrities billed on the party's official website was none other than 'alumnus of the University of North Carolina' and 'current pitcher for the New York Mets' Matt Harvey (click image to embiggen) 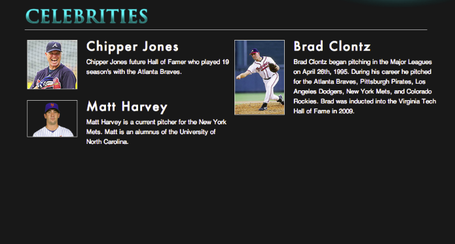 I mean Harvey's inclusion so early on is weird. I mean he's big among Mets fans I suppose, but still quite a random party guest. The fact that Brad Clontz is the only other non-Chipper celebrity makes it even weirder.

But whatever. Say I decide to drop the $650 bones necessary to attend said party. It'd be cool to hang with Matt Harvey after all. Anyway, I'm pretty certain we'd get into a heated, yet good-natured discussion about the use of his two-seam fastball against lefties as measured by Pitch F/X. We'd probably be boys afterwards.

Plus, the guest list has only continued to grow these last couple weeks. Will Clark will be there. Freddie Freeman and Marquis Grissom. Plus Tony Siragusa. Cool, I'm glad I bought that ticket.

But wait. Problem. Suddenly Matt Harvey is now -- on the day of the Super Bowl -- not listed under 'Celebrities'. Instead I've got former Met Gary Sheffield. That is not cool. Where did Matt Harvey go?

Option 1: He was bumped due to the numerous big-name celebs that committed. But no, that doesn't fly because, again, Brad Clontz is still going. That can't be it.

Option 2: Harvey decided he had better plans and bailed. I suppose that's possible, but then why commit so early, providing a two-and-a-half line bio and everything? No, I refuse to believe that.

Option 3: Matt Harvey was never going to this party. Chipper hand-picked the one player that would garner the most intrigue from Mets fans, only to pull the rug out from under them on the day of the game. Probably there will be some sort of Carrie-esque pointing and laughing going on too. Dammit, it's got to be this one -- makes too much sense.

How did I not see this coming a mile away? I mean, a party thrown by Chipper Jones? With Matt Harvey randomly dangled as bait? Stupid. Only an evil bastard -- proven through years of world-class trolling to be heartlessly bent on the emotional destruction of Mets fans -- would, nay, could manufacture and then execute such a sinister plot.

Damn you Chipper. I want my money back.